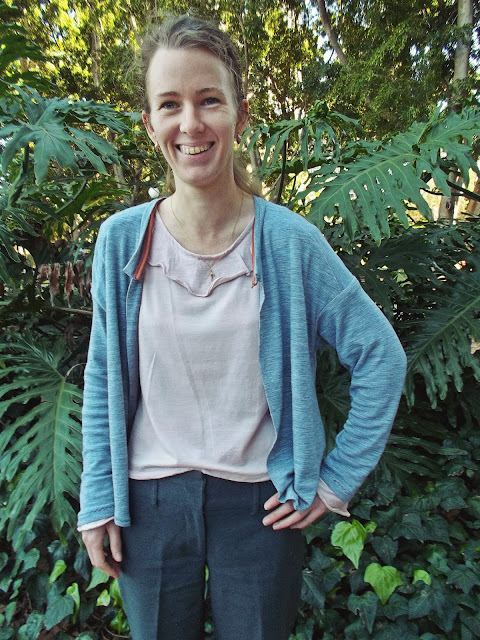 Both of these makes have been finished for a while, and have had multiple wears. Both the top and cardigan are made with New Zealand merino jersey from The Fabric Store.  I'm finally getting them posted before winter disappears completely. The cardigan might get all-seasons wear, but the long sleeve top is definitely a cooler weather item. 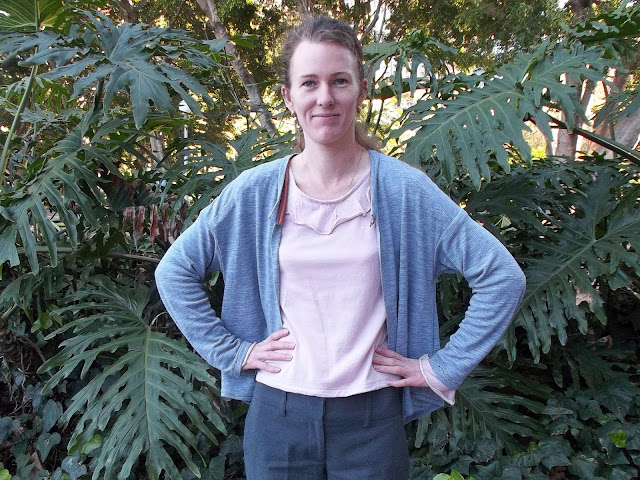 First, the cardigan, although this was sewn second. It's actually an edited version of the Gather Blouse from Japanese pattern book She has a mannish style. I've made the blouse before, so when I was looking for a pattern to base a loose and drapey cardigan on, it seemed like a good choice. To make it more of a cardigan I narrowed the lower back piece so it isn't quite so gathered, and lengthened and tapered the sleeves to be full length. I went through my buttons to find some to use for the closure, but ended up deciding the shape of the cardi works better without a closure. 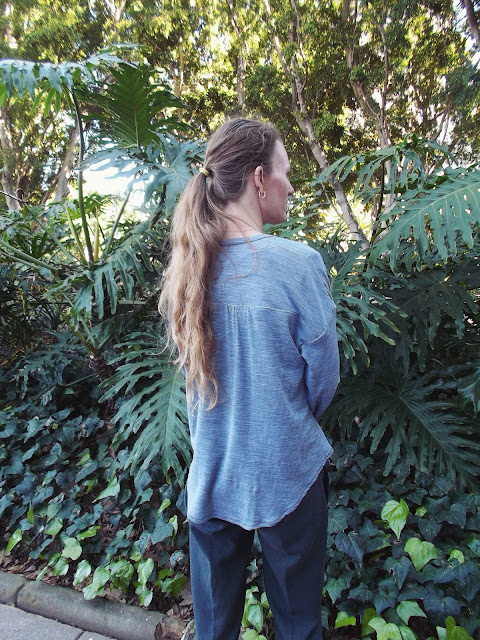 The one other thing I did for the cardigan was cover all the seams in bias binding. Given it's a loose cardigan and I'd decided against adding buttons, I wanted to make sure the insides looked nice because the could be seen. I'm largely happy with how they turned out, other than the collar not laying flat. The sienna satin binding stands out a bit more than I'd realised it would., and also is a little bulkier where the seams joined than I wanted, but that's only a minor quibble. 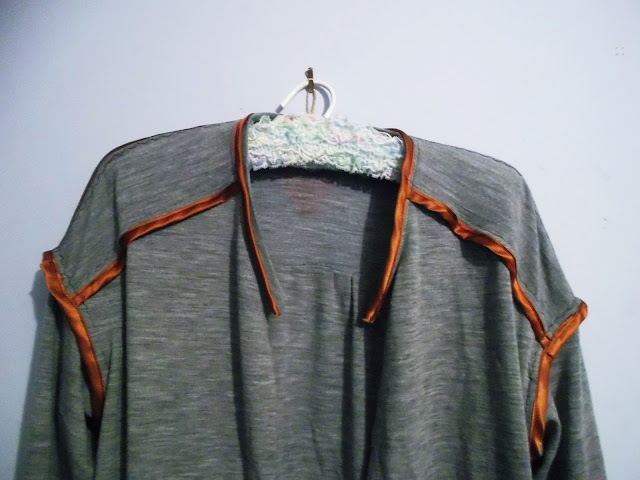 So on to the top. It's also merino, in a very pale shade of pink which unfortunately doesn't quite show up in the pictures. Unlike the cardigan, this top is self drafted. I used my bust and waist measurements to then draw up the front and back pieces. I did put the shoulder seam a bit too wide and ideally would have pulled it in about 1.5cm. However I decided it wasn't too far off that it was worth redoing, so I'll just put up with sleeves that sit a smidgen off my shoulder. 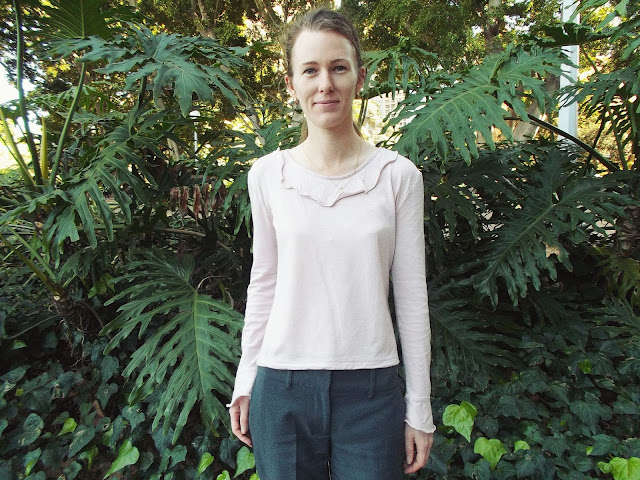 The collar and cuffs were designed to be slightly ruffled, and I'm pretty happy with how they turned out. I used the left over merino from the body of the top and cut curved pieces. The cuffs were easy, because they aren't too large, but I only just had enough room to cut a piece for the collar. Initially it didn't look like it was going to show any sort of ruffle, but finishing the raw edge with a rolled hem stretched it out just enough that it self ruffled. It's not over the top, just enough to give it a bit of interest and difference from a plain top. 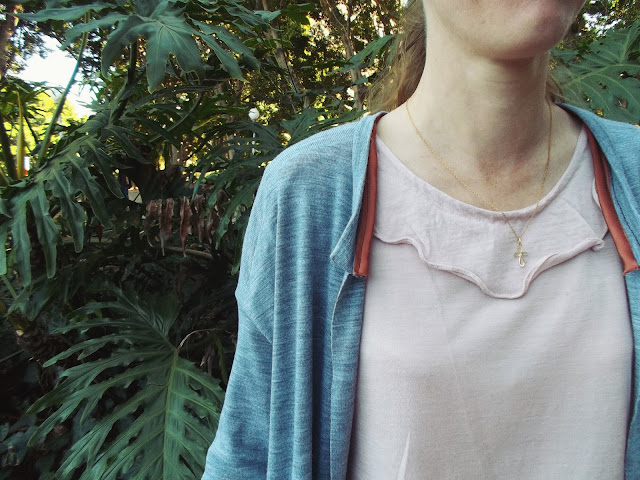 Also, the photos for once are with a nice background! That's thanks to a couple of the Sydney Spoolettes wanting to get some photos done, so we met in Hyde Park on Thursday lunchtime to take pictures for each other (thanks Susan for taking mine!). Makes a nice change from the retaining wall above our pool! 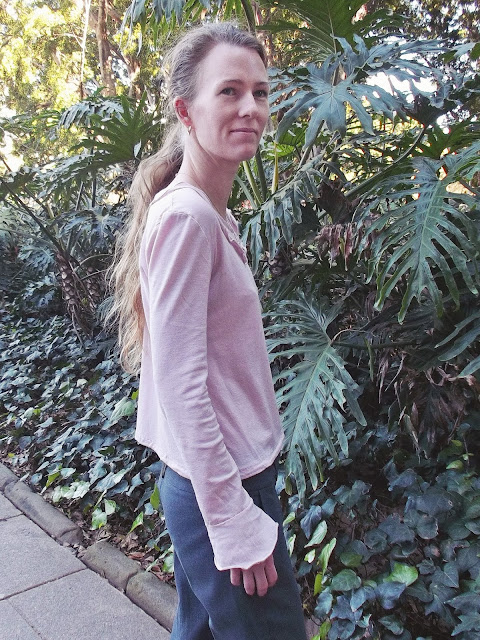 Lastly, sewing with merino was surprisingly easy. I'd been daunted by the prospect, partly because the fabric was very soft and stretchy jersey, partly because it wasn't cheap. But it went through my machine wonderfully, and I never had any problems with dropped stitches. It was a little tricky covering the back seam of the cardigan with bias binding, but that was due to the extra bulk from the gathering, not due to the fabric itself. So in the future, I won't be scared to sew with merino. Instead, I'll relish the opportunity because it is so nice to work with and to wear. 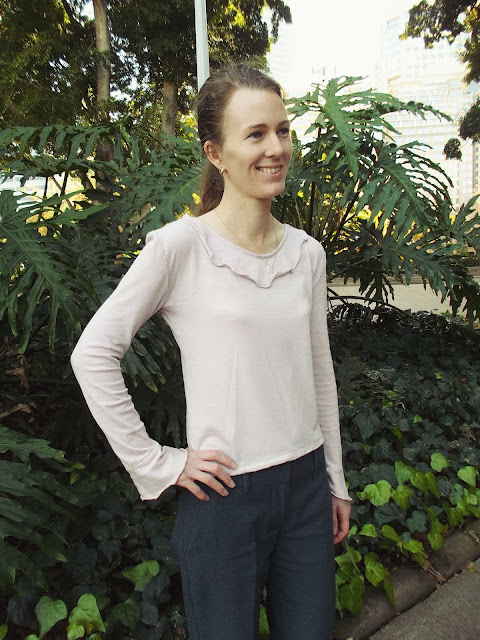 Posted by Antipodean Stitcher at 22:35