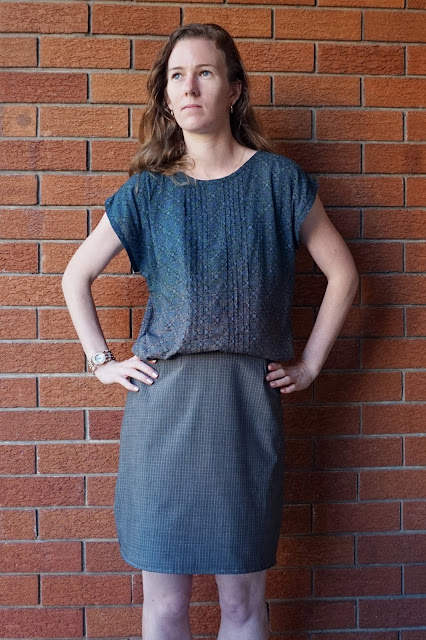 Two new makes today, a top and skirt to wear to work. Both are simple makes in classic styles, making them very wearable. 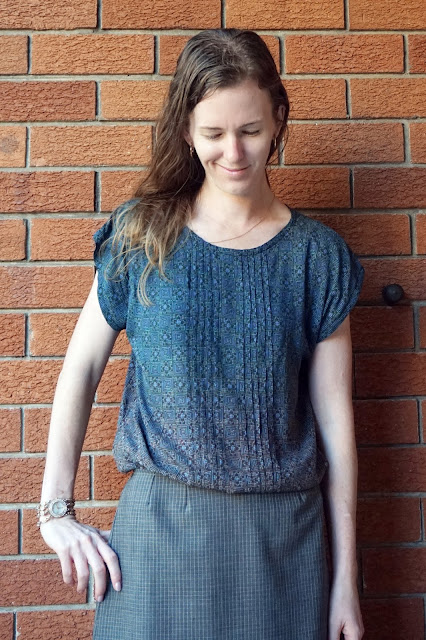 The top is the Betty Blouse which was in Simply Sewing magazine last July. I rarely buy sewing magazines, but I'd been looking for a non-button up short sleeved blouse pattern with no closures or complications. This pattern was pretty much exactly what I wanted. It's a simple woven blouse with just a front and back piece and pintucks. 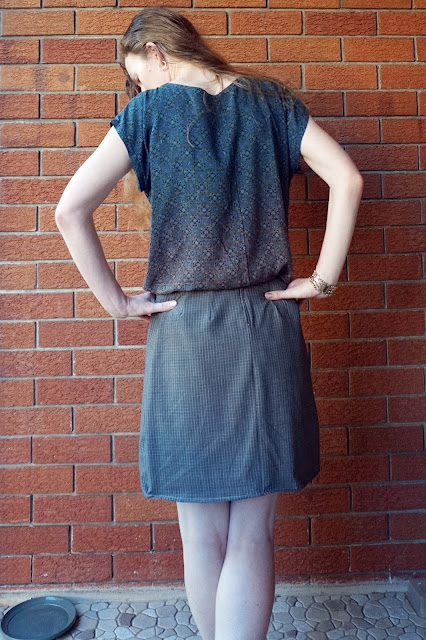 The fabric is a viscose from Tessuti called Running Out Of Blue. The print is mosaic style and changes from peacock blue through to rust about every two feet. I hadn't realised the print changed colour when I picked the bolt up - I'd just liked the peacock blue - but when it was being rolled out to be cut I saw the rust colour emerge. This meant I had to decide how I was going to use the shifting colours in the blouse, basically which colour I wanted at the neckline and which at the hem. After holding it up against myself each way I decided the blue at the neckline was the way to go. 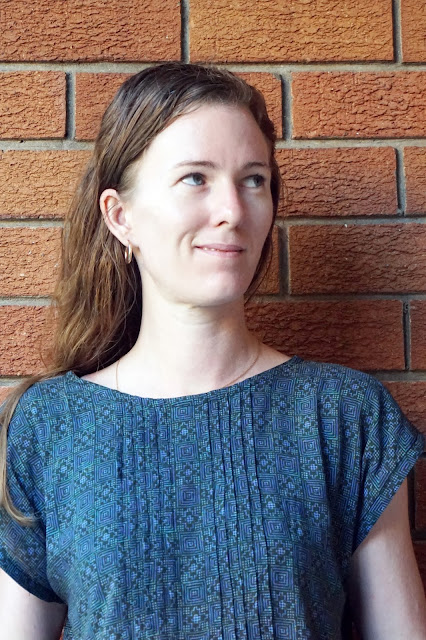 The fabric is beautiful with a lovely hand, but being a lightweight viscose it was a bit slippery to pin and cut out. Fortunately the print gave me handy lines to cut along to even out the hem and shoulders! The print was also very helpful for making sure my pintucks were nice and even - I could fold in the middle of the squares and stitch along the second outline and know that each pintuck would be exactly the same. 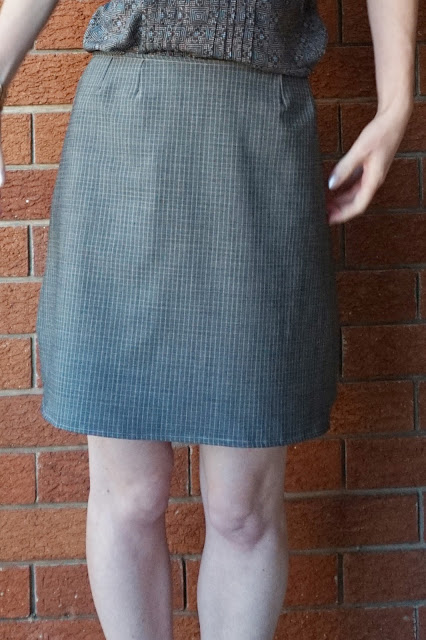 The skirt is an adjusted version of the straight skirt pattern in the Blouse Skirt and Pants Style Book. The fabric is a lightweight grey wool check from The Fabric Store, lined with some grey stretch woven cotton I'd bought for another project but found was the wrong weight. The zipper was stitched in by hand to try and keep it looking as neat as possible. 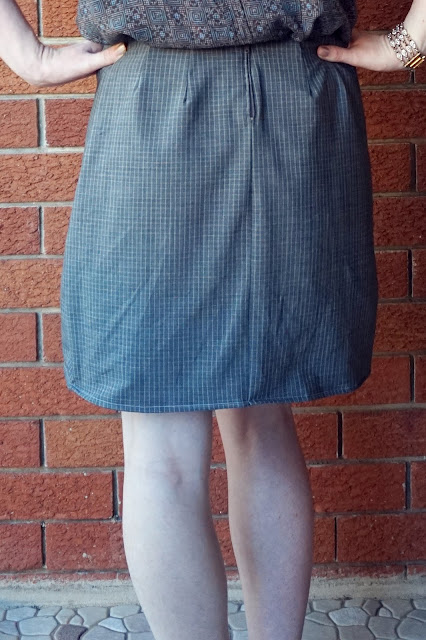 I used my French curve to slightly widen out from the waist to a more A-line shape. It was mostly an easy make, except that the two different fabrics do handle differently. I had measured them the same, but when I went to sew it up the shell was wider at the hem than the lining. To fix this I stitched in the side seams on the shell, It was still a little too wide when I sewed the hem, so I had to slightly fold it at the seams, but hopefully it isn't visible! 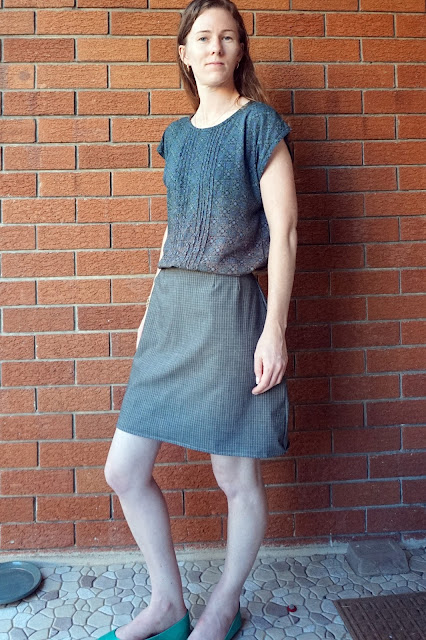 Because it's such a straightforward pattern and I'd used it once before I didn't look at the instructions, and so forgot that the pattern doesn't include seam or hem allowance. It didn't matter for the seam allowance given I'd already widened the skirt, but it did mean the hem was shorter than I initially planned. I had some fabric left and was going to put a flounce on for extra length, so I measured a curve, cut it out, and then realised I'd measured the outside rather than inside length of the curve, so the flounce was too narrow. So I folded the hems of the lining and shell in towards each other as narrowly as I could and stitched close to the edge. The length is actually fine, it's just not quite what I'd planned, but I'll get used to it.

Posted by Antipodean Stitcher at 14:10 No comments: 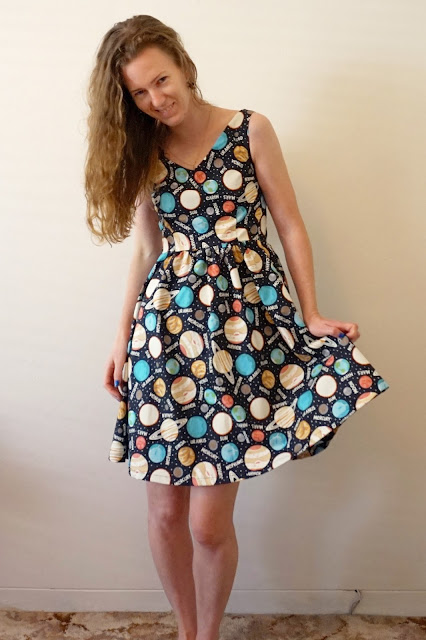 That's right, this dress glows in the dark. It's an amazing solar system print - including Pluto and the moon - with everything helpfully labelled.
I love a good quirky outfit, and this fabric makes a great quirky dress. 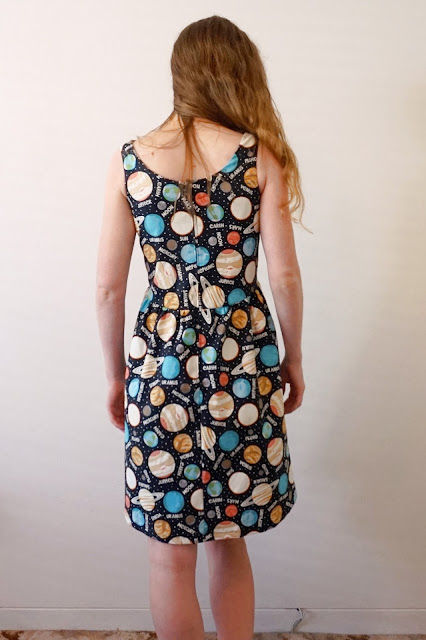 I picked this fabric up at a local quilting store. I'd actually gone there to get a new sewing box as the lid had broken off my old one. But they also had 30% off fabric so I thought I'd have a look. I saw this solar system fabric and loved the kitschness of it, so decided to buy some. When the woman serving told me it glowed in the dark, it just made it sound even better.. 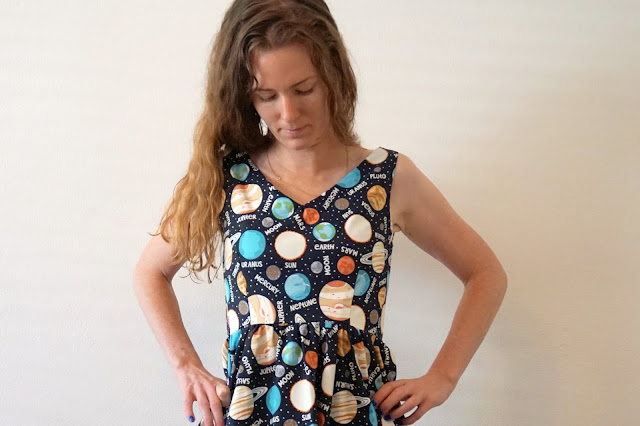 The selvedge of the fabric says it's for children's sleepwear, but that's crazy. Why waste such a great fabric on something that's not going to be shown off much? Ok sure, something that glows in the dark makes sense for nighttime - I, along with 90% of other teenage girls in the 90s had glow in the dark stars stuck on my ceiling - but this fabric needs to be seen. It needed to be a dress. 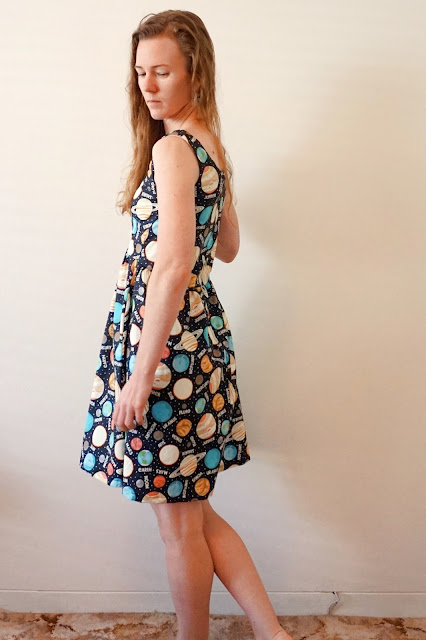 The pattern I used was a free download of a Gorman dress I got about five years ago from Tessuti. It's a fairly straightforward pattern, a bateau neck empire line bodice with a gathered skirt. However, it is very short, so I lengthened it by about two inches. I also changed the neckline, to a v-neck at the front and scoop at the back. I also decided to lengthen the back bodice, curving from the sides to centre back zipper, in turn giving the skirt a little bit of extra length at the back. 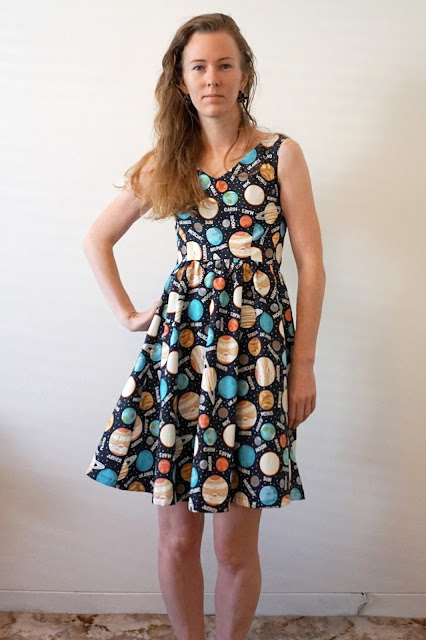 The dress itself was a very easy make. It's a completely straightforward construction, waist darts in the front, no darts in the back, and a plain gathered skirt. There are narrow facings aound the neckline and armholes, which are stitched down by hand to avoid a visible stitchline, and a 1.5cm hem. I have used this pattern before, so it was nice and quick to put together. 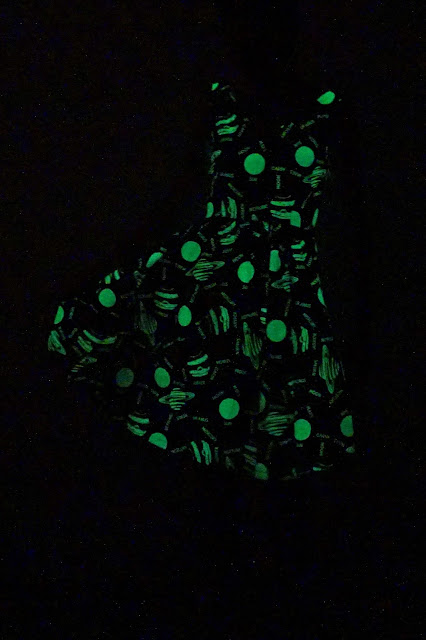 And as you can see, the fabric really does glow in the dark! 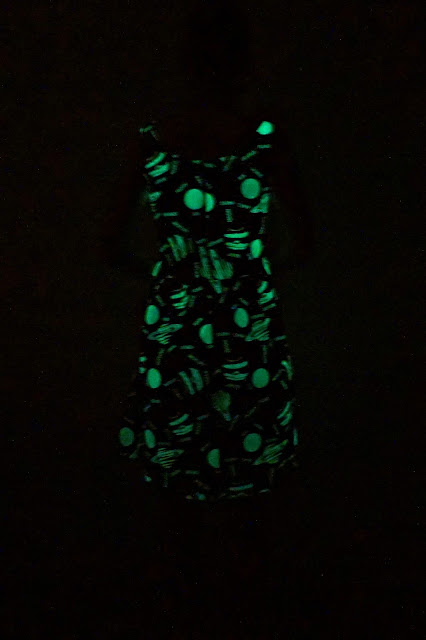 Posted by Antipodean Stitcher at 22:30 5 comments: