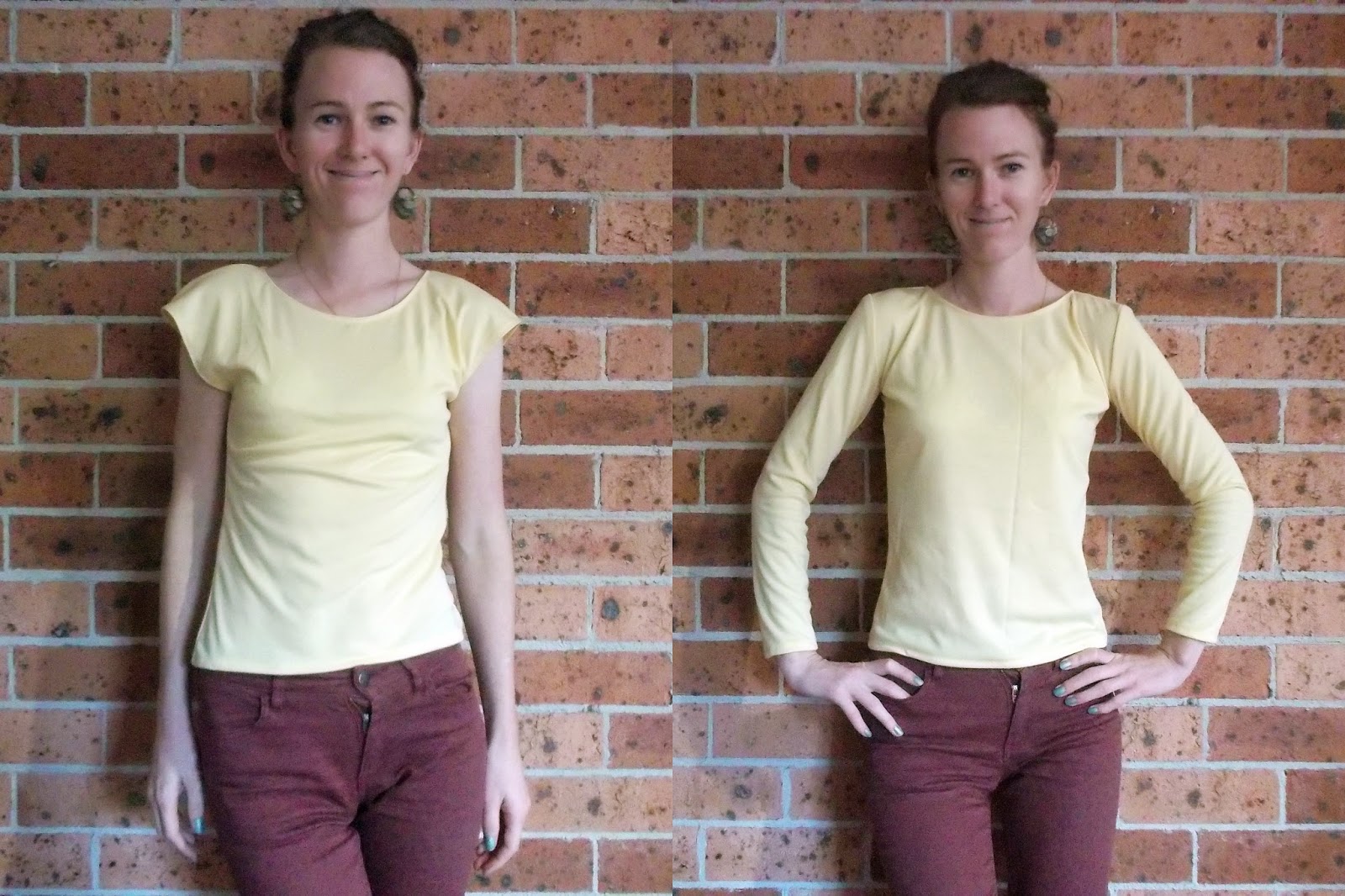 The weather is starting to cool down here, so I'm turning my mind to warmer clothing. A few of my basic long sleeve tops have been getting on a bit, and really need to be replaced. I probably should have made more last year but I couldn't find jerseys I liked, and tops aren't all that interesting to make so there was always something else to distract me. But when I was filling in time waiting for a bus I went into the op shop next to the station. It tends to carry fabric remnants alongside second hand clothes and I found this piece of soft lemon jersey for $1.80 (and a few other things I'll use at some point in the future). Score! 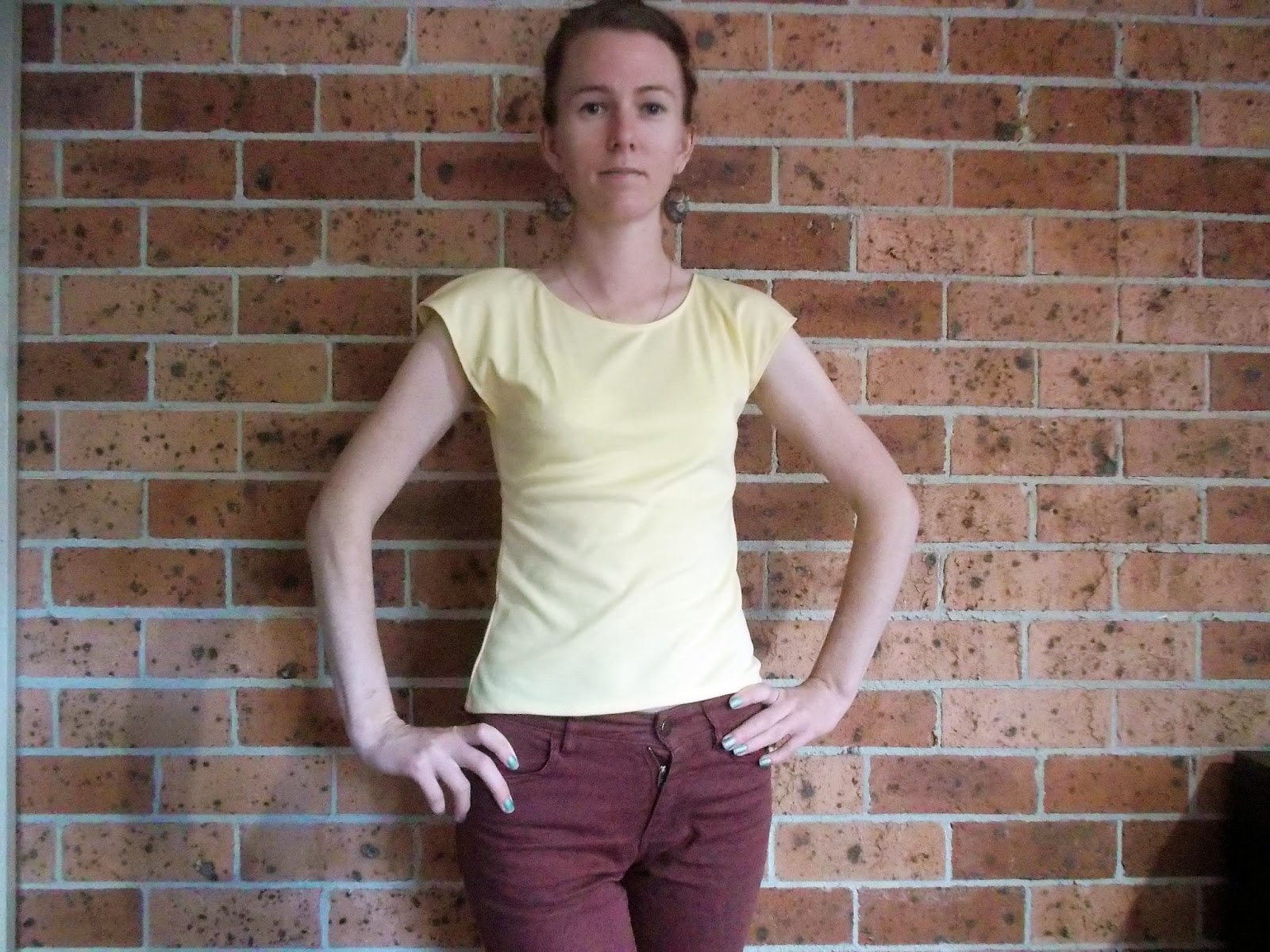 The piece of jersey was a reasonable size, about 140cm wide and the same length, so there was way more than I needed for a long sleeved top. So I decided that, given it's a good, soft, jersey, and a warm but not overwhelming colour, that I would make a simple shell top that can be either very casual or be dressed up a bit with a necklace and maybe a nice skirt and blazer.

Most of my t-shirts are band t-shirts, and half of those that aren't have lots of colour and big prints on them, so making something as plain as this is a refreshing change for me! 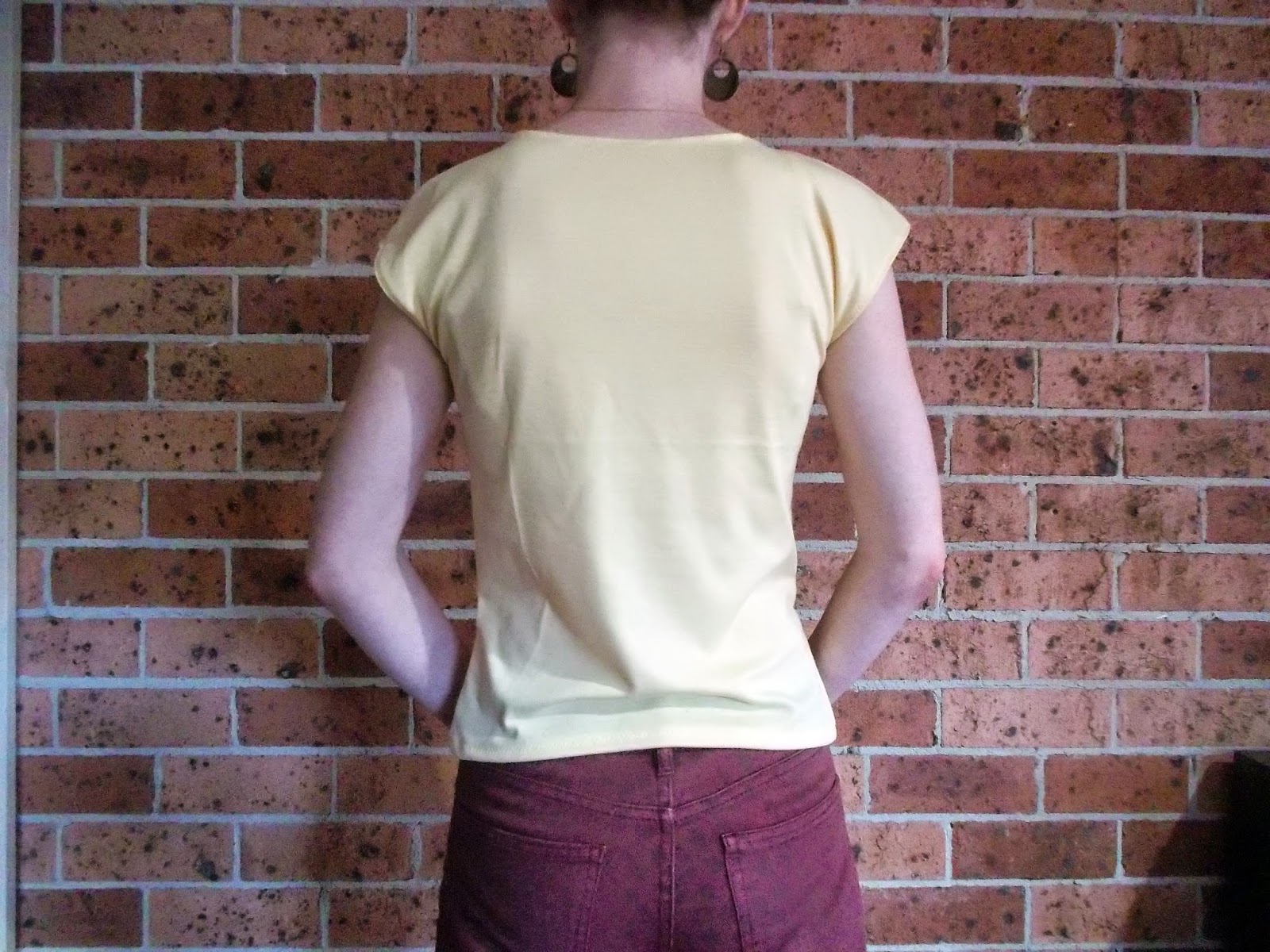 I didn't bother using a pattern for this, but I did base it on the fit of a jersey shell top I already owned. I didn't want it to be tight, but I wanted it to be fitted, so I took my measurements and then added a bit under an inch at the bust and hip, and an inch and a half at the waist. I marked these points on the fabric and then used my french curve to join the dots - I don't use the french curve a lot, but it is so useful to have, especially for drafting something like this! I cut the back piece a bit straighter than the front, so the front is more fitted. 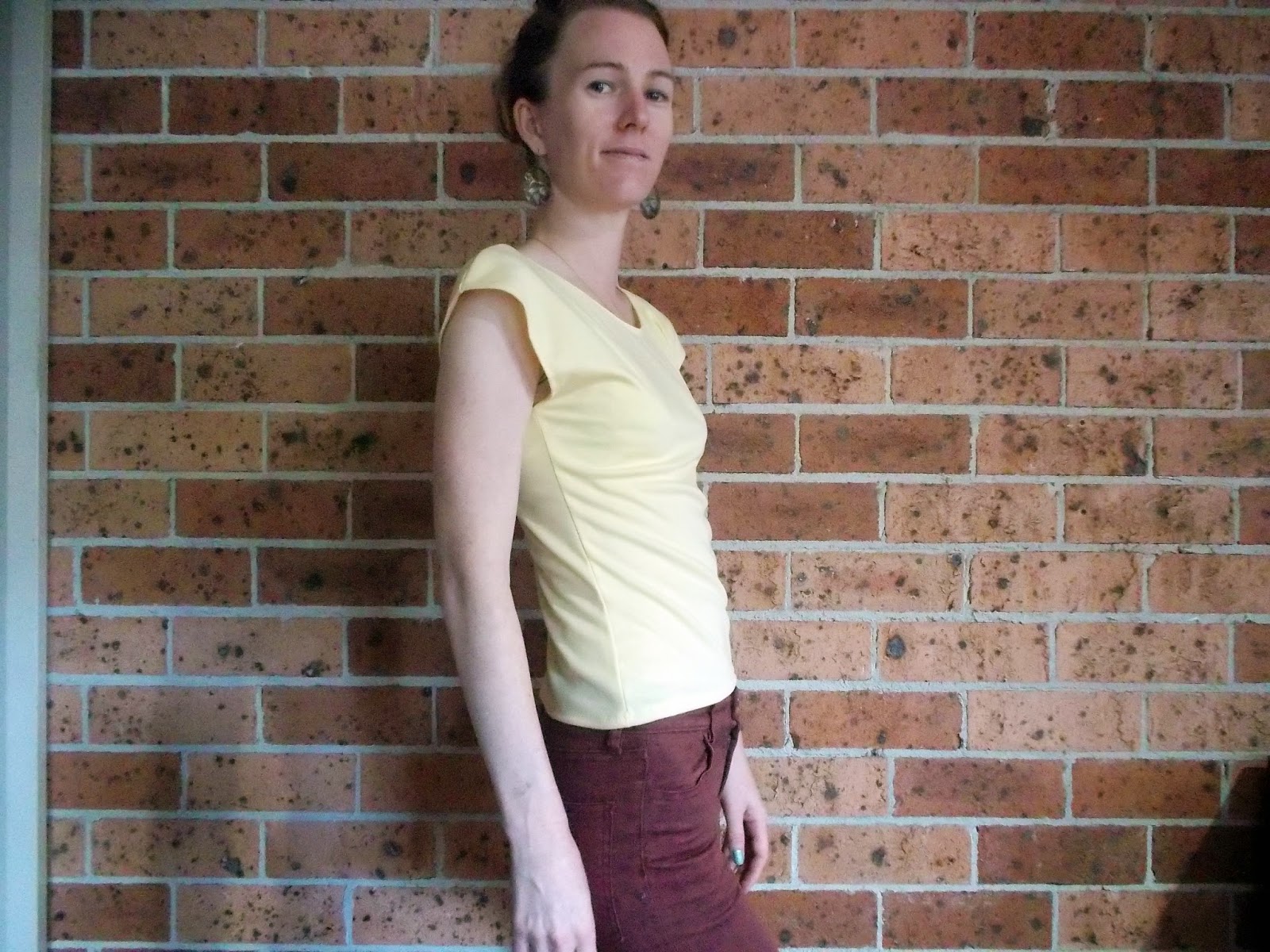 You can also see that while the top is sleeveless, it is slightly capped. From the underarm I curved it up and out to about an inch wider than the bust mark. I also made the shoulder seam slightly sloped so that it would curve down with my shoulders rather than sticking straight out.

To finish the top off, I put a 1cm hem at the bottom and narrow rolled hems for the neckline and sleeve caps. 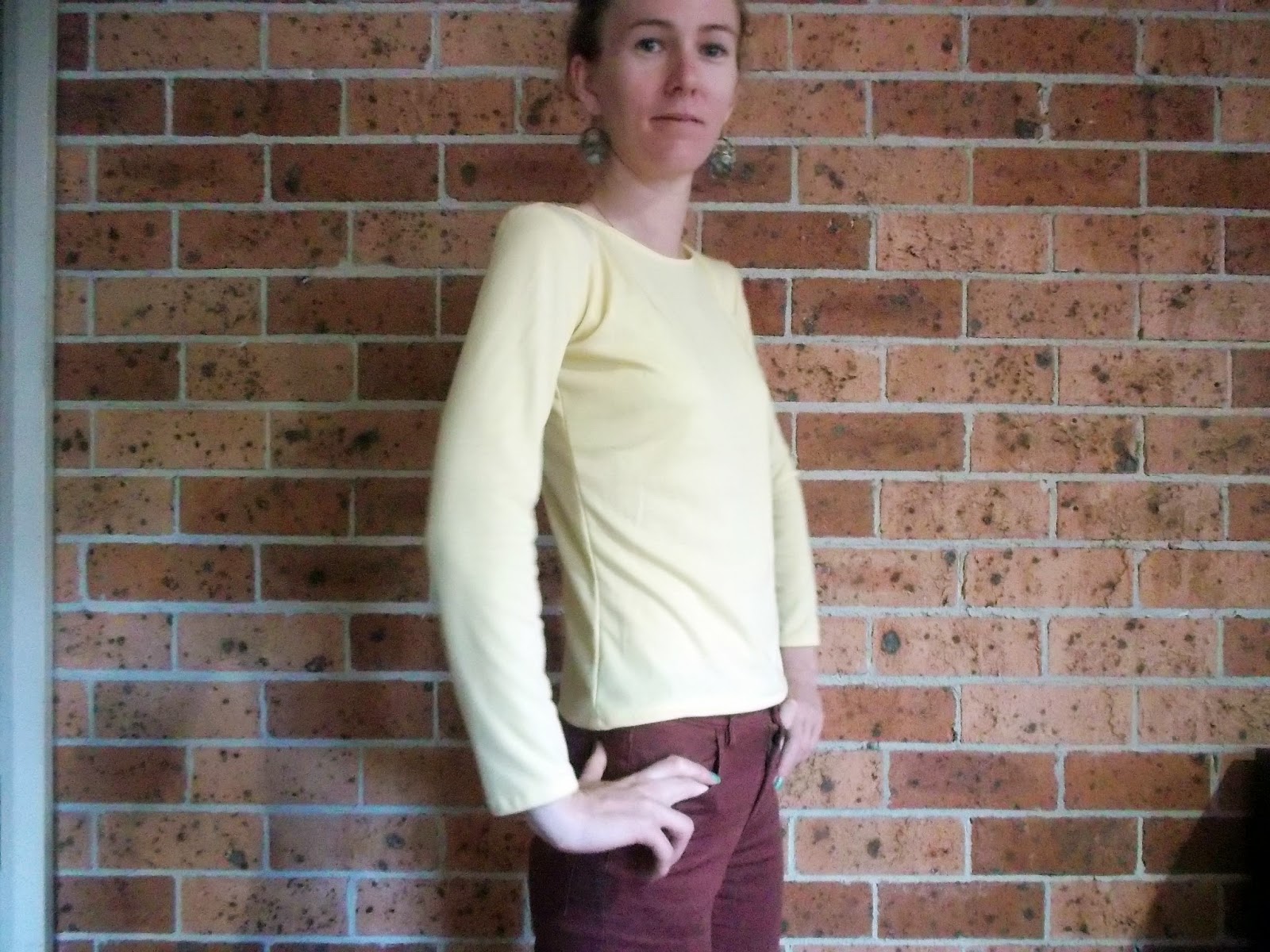 So after I'd made the sleeveless version, I got on to making the long sleeved top I'd bought the fabric for. I used the exact same technique for drafting this as I did on the shell top, but I didn't narrow the front in at the waist quite as much, so the front and back pieces are essentially identical this time. The other change compared to the first top is the neckline: for this one the neckline is higher and rounded. Again, I couldn't be bothered using a pattern so I took my upper arm and wrist measurements and drafted the sleeves based on them. 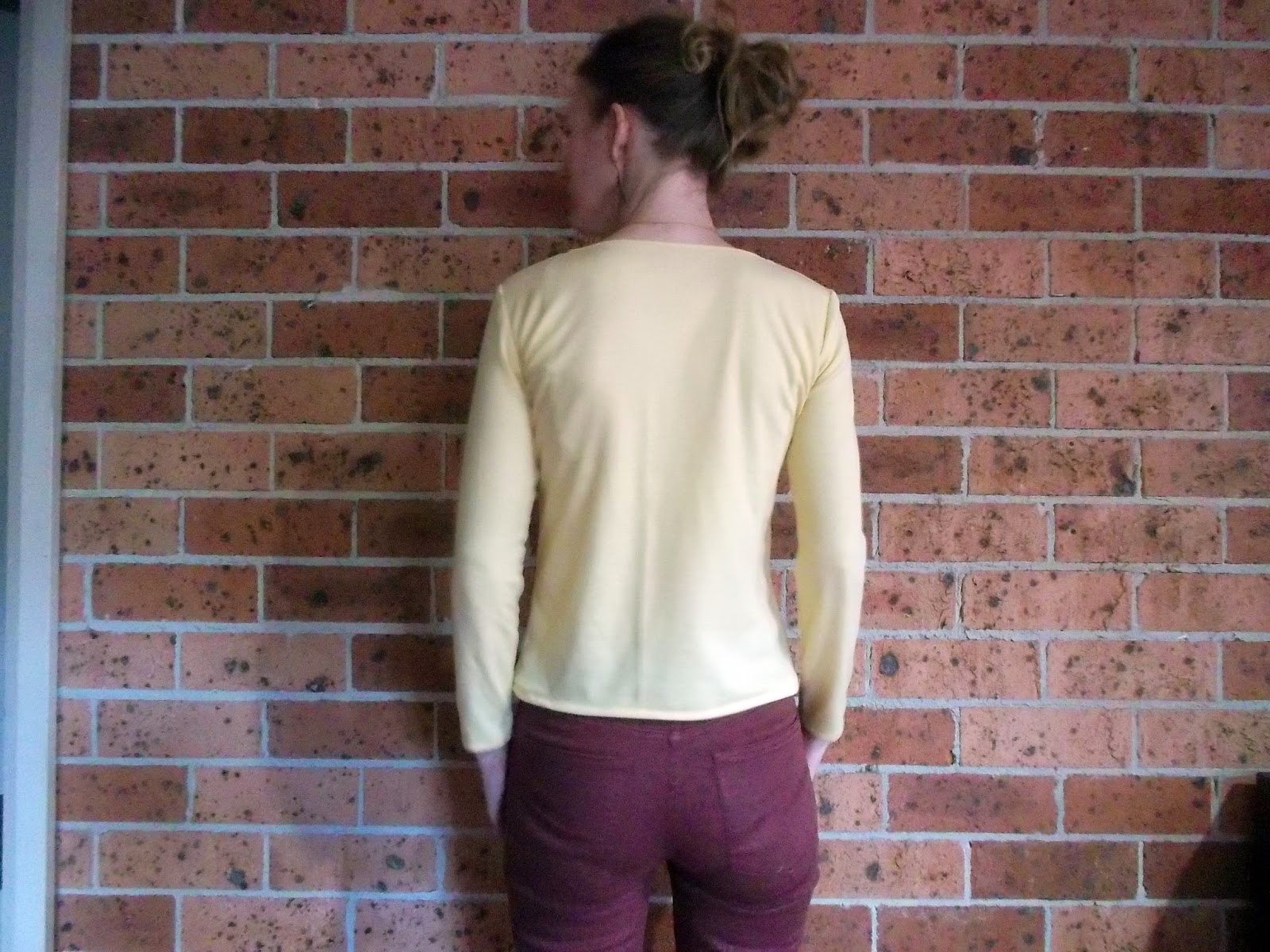 When I first sewed this together, though, I found I'd made a stupid error - I'd made the shoulder seams too wide so the sleeves stuck way out. It looked like a bad 80s top I'd taken the shoulder pads out of. Not a good look. But fixing a too wide seam is easy, so I just took the sleeves off, cut a chunk off each side, and sewed them back on. They're actually still a few milimetres wider than I'd ideally like, but they're much better than they were! They also ended up being bracelet length which wasn't what I planned, but I quite like the sleeve length. The neckline is again a rolled hem, and there is a 1cm hem on the sleeves and at the waist.

When I first tried sewing jersey, I used a straight stitch but quickly learned that wasn't a good idea. There's no give in the seams to match the give in the fabric, and it ends up being terrible. I've learnt my lesson now and always use a zigzag. Now sewing with jersey is easy, and I was able to whip up both of these tops in one afternoon! And in this lovely yellow, I can wear sunshine all year round. 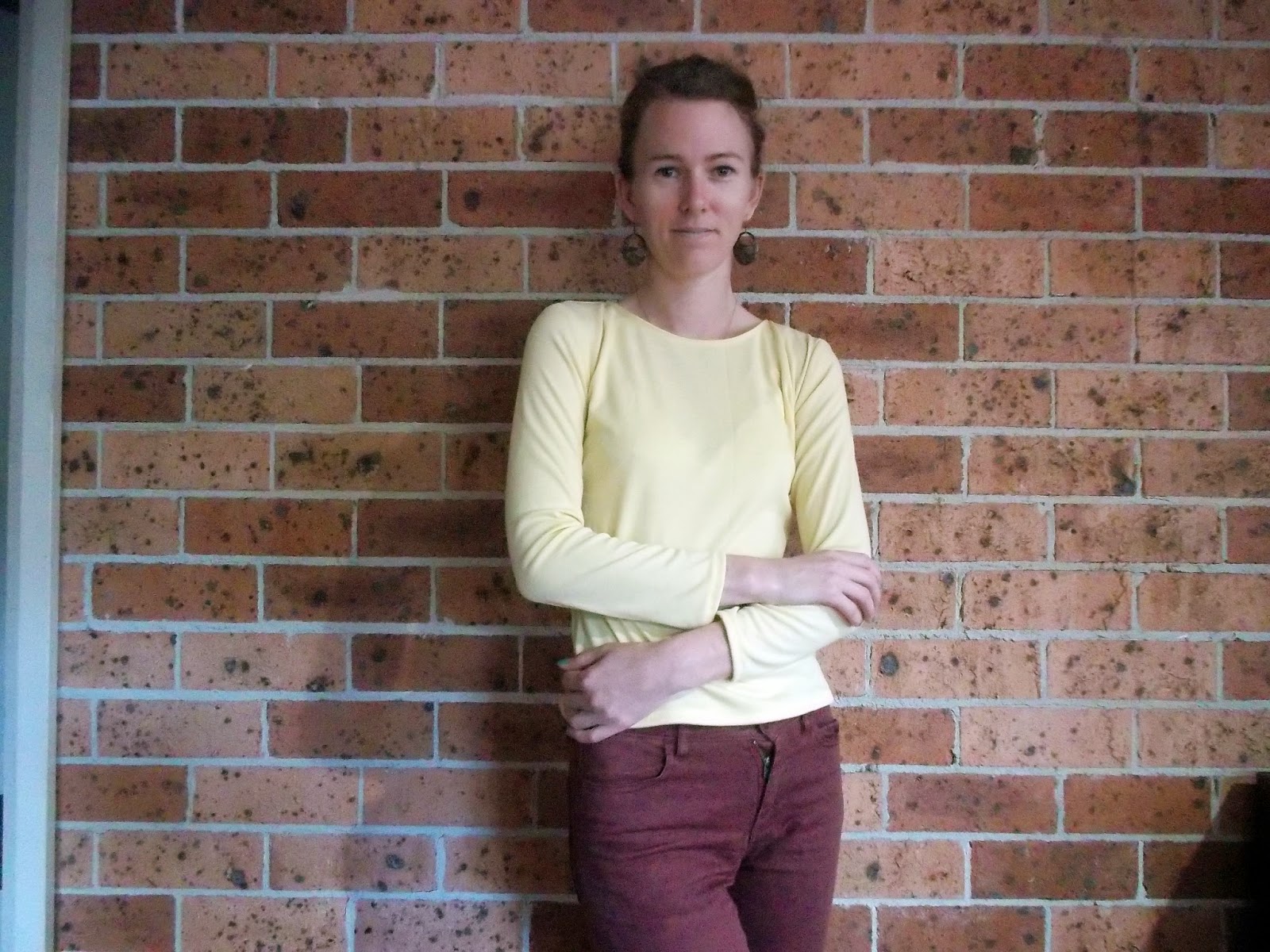 Posted by Antipodean Stitcher at 03:32 No comments: 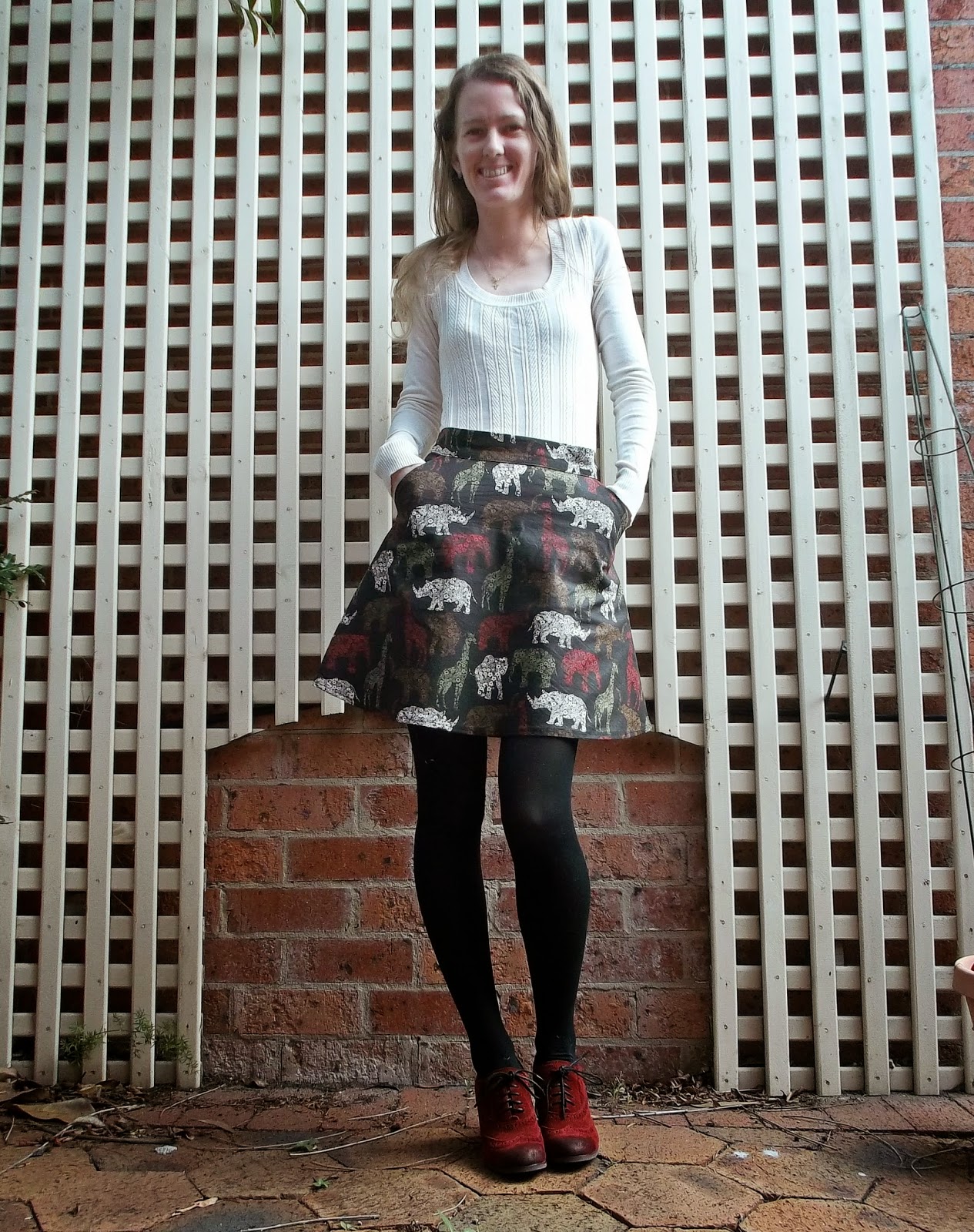 Animal prints seem to be pretty popular at the moment. So do florals. But I have something better: floral animals! This fabric has elephants, giraffes, rhinoceroses and gorillas printed on it, all made out of pretty little flowers because of course they are. I'm a sucker for kitschy fabrics so obviously when I saw this one it had to be bought. It's from Spotlight, and it's some sort of painted/coated cotton, from memory. I think it's actually meant to be a furnishing or curtain fabric - the weight of it and the kind of waxy-feeling coating on it makes me pretty sure it wasn't meant for clothes. Oh well, it makes a great skirt so who cares what the fabric was 'meant' for? 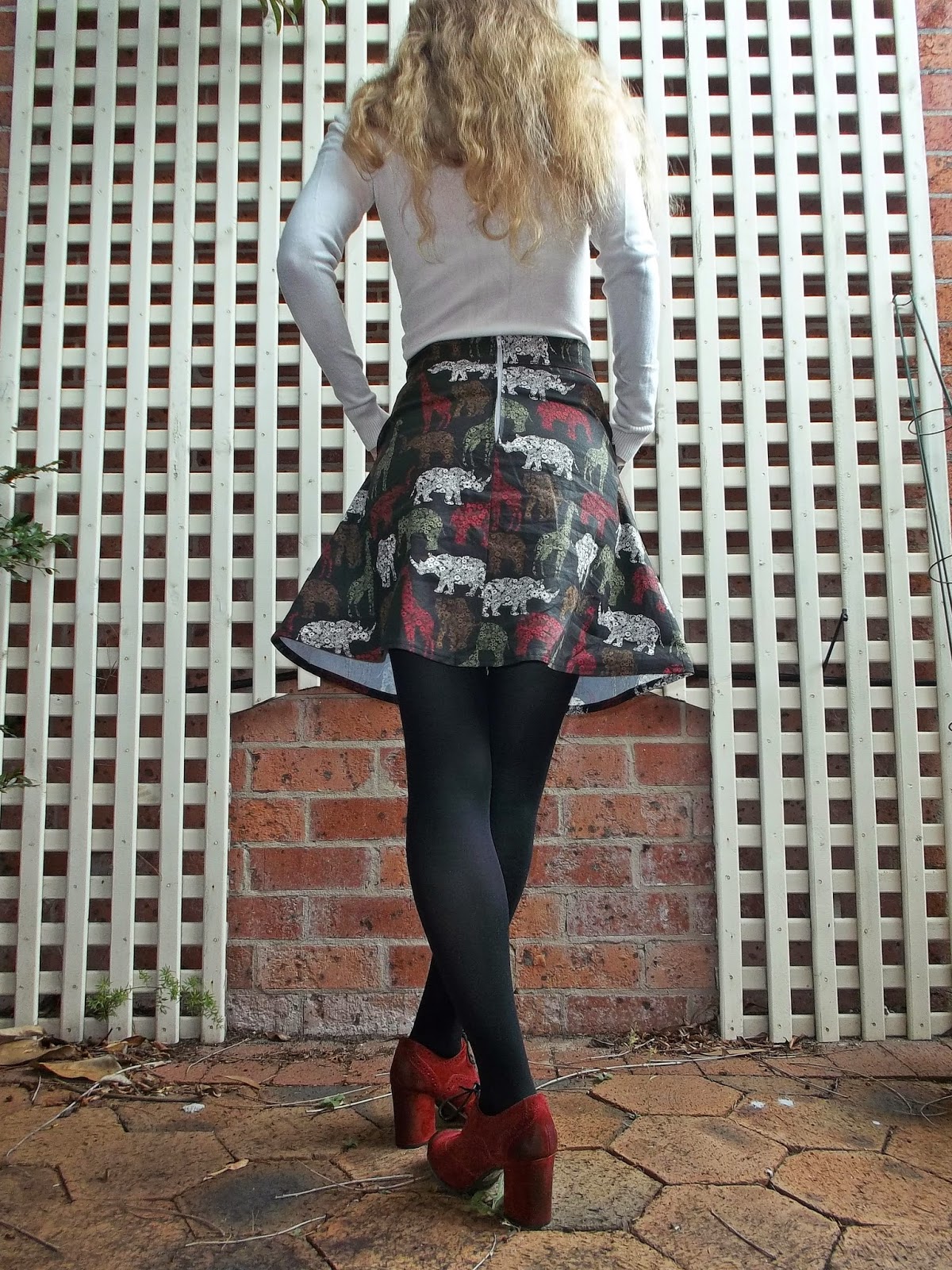 I actually found the fabric a year or more ago, but hadn't gotten around to do anything with it. It wasn't event because I didn't know what to make, I always knew it was going to be an a-line skirt with pockets, but there was always something else I wanted to make first, so this kept getting pushed back. But as the weather is cooling down I wanted a more solid weight skirt to wear, so out came this fabric. 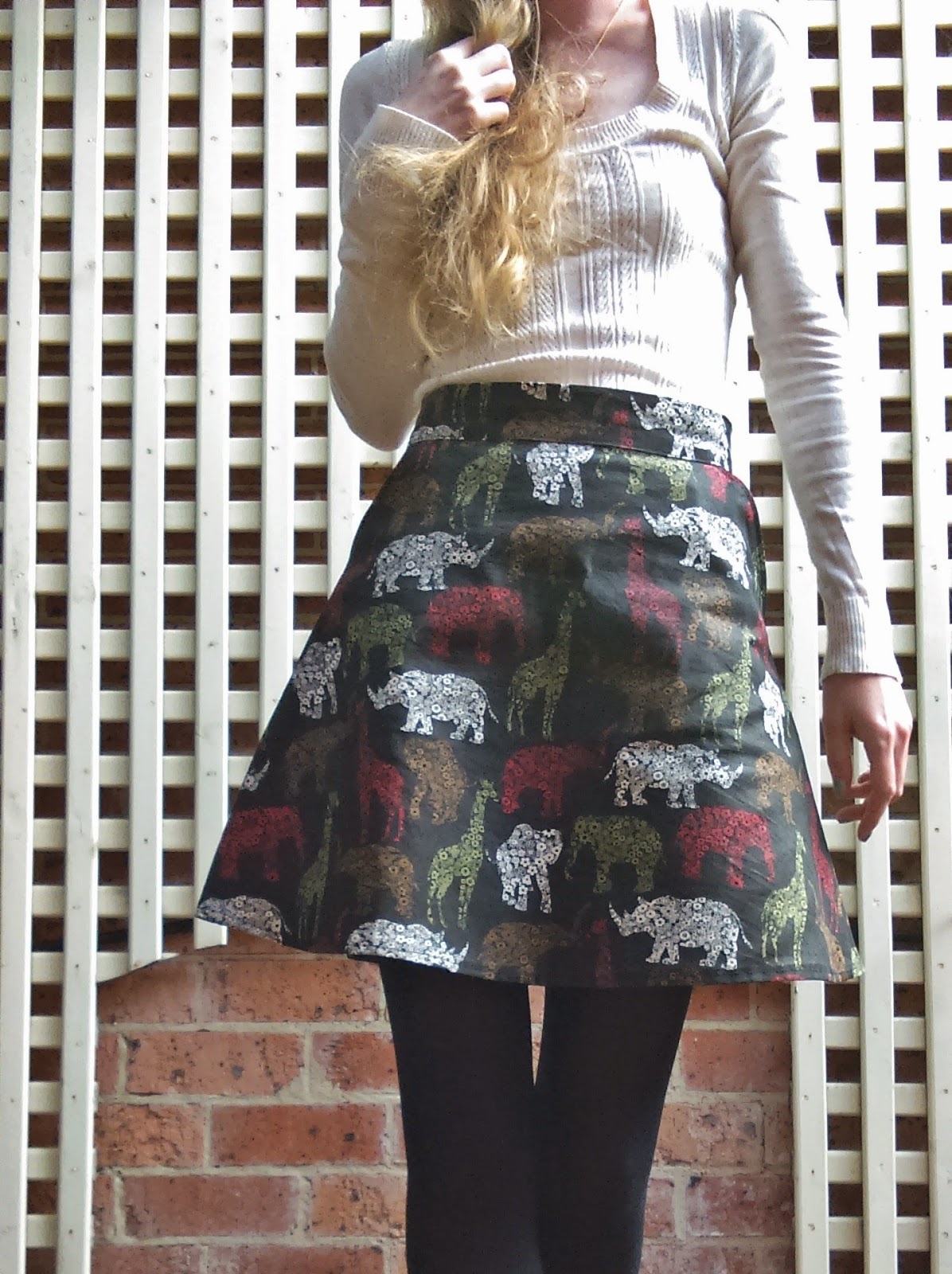 The skirt is self drafted, given it's just a basic a-line. It's slightly high waisted, with the waistband sitting just above the belly button. The stiffness of the fabric means it keeps its shape rather than settling softly as a more flowy fabric would. I think it also gives the skirt a fun feel. 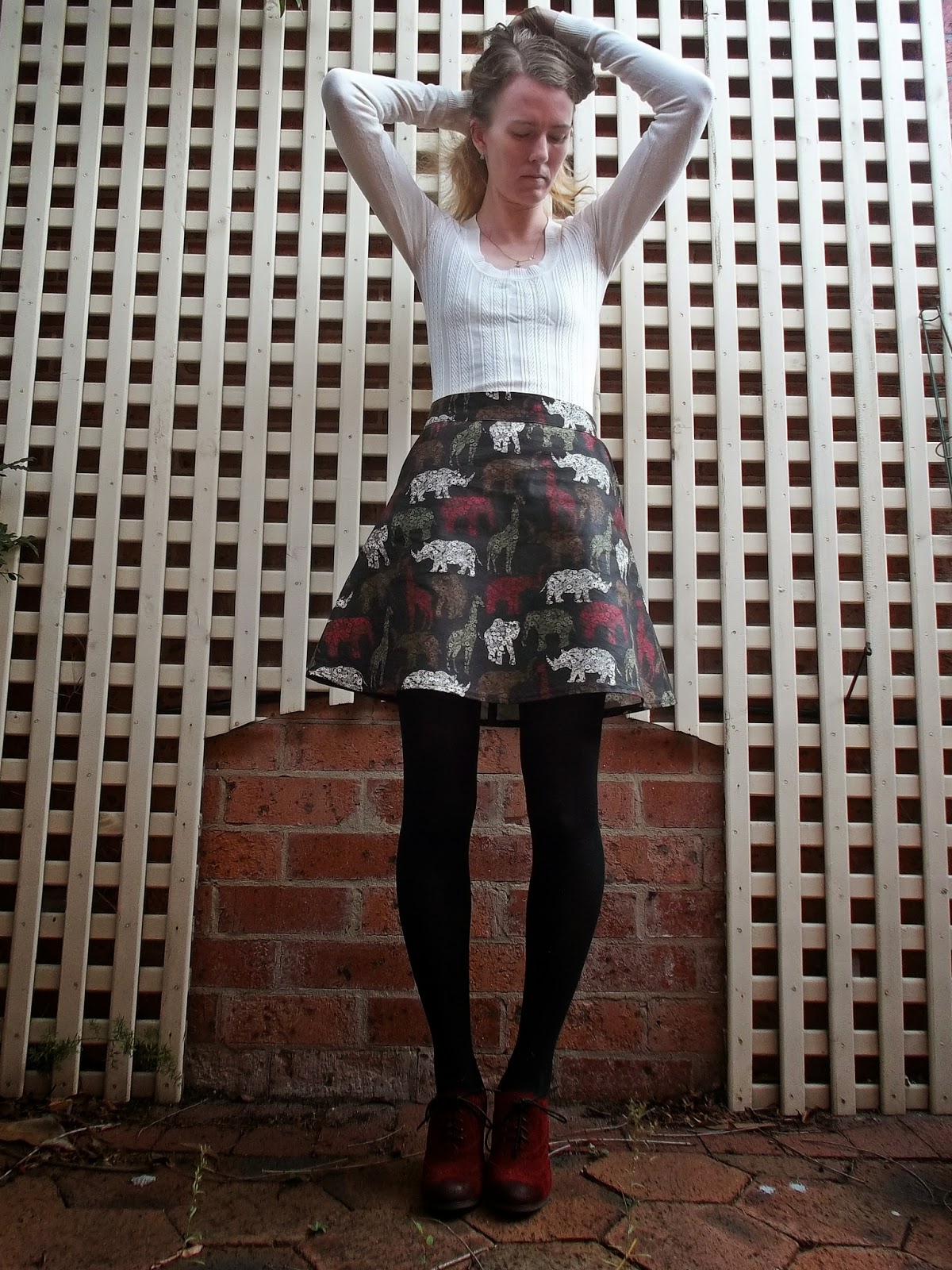 I should have gotten around to making this skirt earlier - it's one of those very easy to do projects that are completed almost before they're started, which is always nice. And it's just a really fun fabric and an easy to wear skirt. I'm pretty sure this will get a lot of wear over the next six months. Actually, it'll probably become an all-year skirt rather than just the cool weather skirt it was originally planned to be. 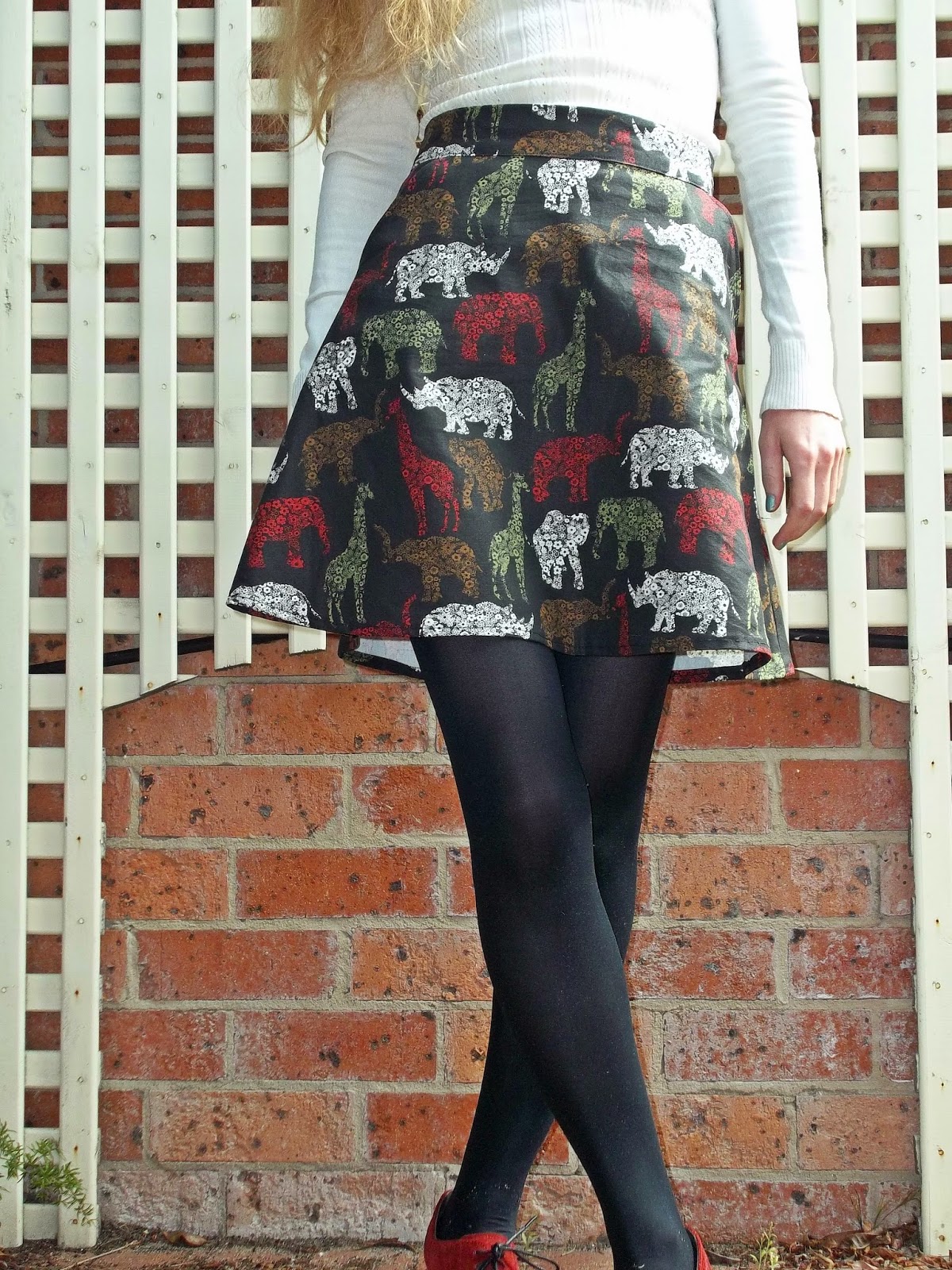 Posted by Antipodean Stitcher at 03:40 No comments: