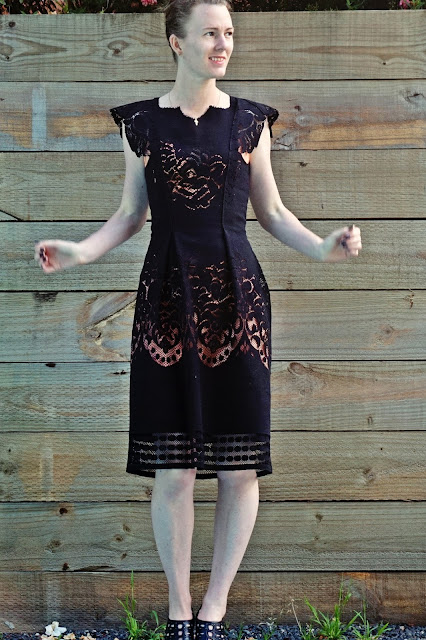 First post in a month! And this dress almost didn't even make it.
This dress was made as an entry for Tessuti's cut out lace competition. Even though I'd bought the fabric a day or two after the competition was announced (perks/dangers of working a less than ten minute walk from Tessuti's Surry Hills store) there were quite a few things that almost got in the way of the dress being made. 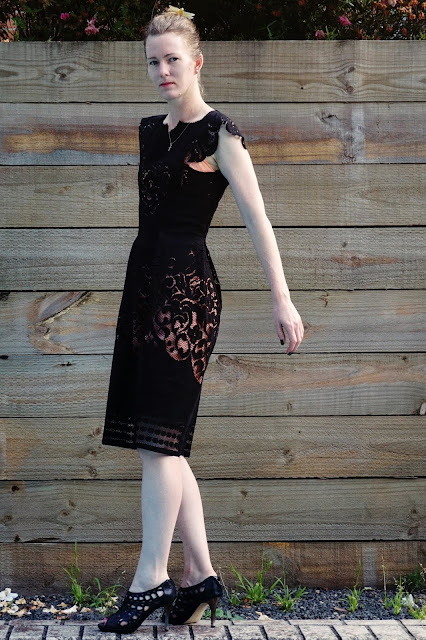 The first thing that delayed this dress was a holiday, and some holiday sewing of shorts and cargo pants to wear while bushwalking in Western Australian national parks. Because of this, I didn't have time to start on my competition entry until I got back from holiday a week and a half into September. But the bigger problem was that I just couldn't seem to get my make to look how I wanted it to look. 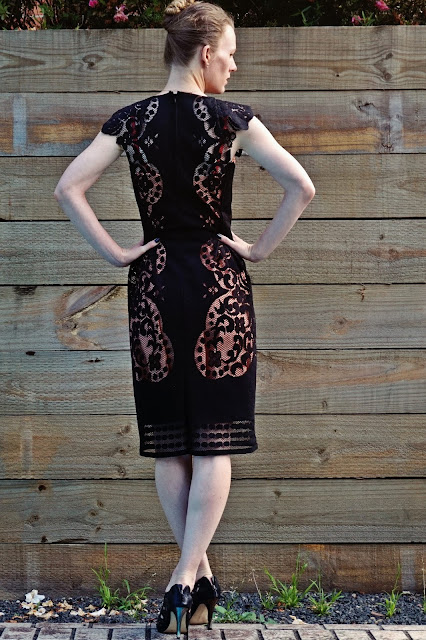 I'd decided as soon as I saw the lace in store that I wanted to do as little as possible to it, and just let the fabric speak for itself. I decided to buy a single panel so I wouldn't be tempted to do anything too fussy. I also wanted to use the half flower piece at the centre top of the panel as my neckline, so I thought a simple fitted sheath dress would be the go, and started pinning and draping on my mannequin. 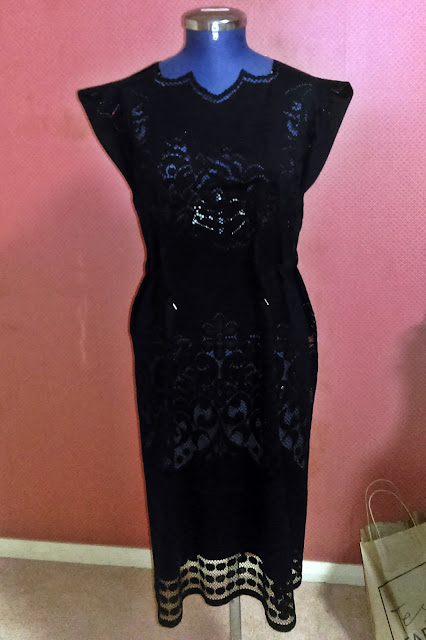 It didn't quite go according to plan. First, I needed to do the centre pack seam and insert the zipper. I had been going to use an open ended zip, but when I got the black open ended zipper I had out, it wasn't long enough. Given this was last weekend and entries closed yesterday, I decided I didn't have time to go searching for a long enough open ended zip and instead searched through for other options. 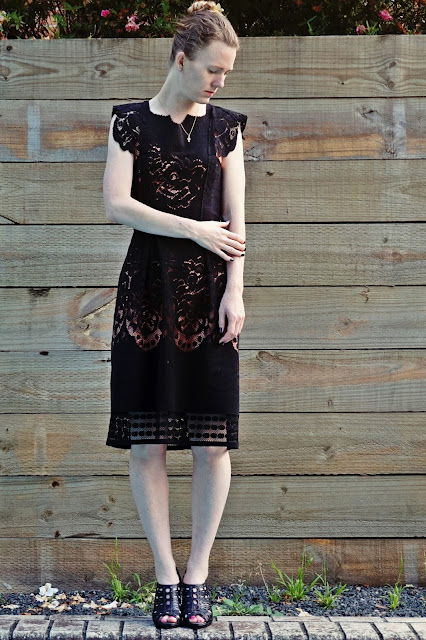 Initially I went for a normal black zip about 45 centimetres long. I pinned it in, folding the fabric in further as it got down to the waist. I stitched the zipper in, and then for the lower half of the seam eased the seam back out from the waist to the hip and then straight down to the bottom. I then folded in some double pointed darts to fit the bust and waist, putting in two long darts and four short darts - two near the centre front, two close to the sides. I made sure they fit my mannequin, sewed them up, trimmed out the neckline, stitched the shoulders together, and cut out some of the lace for armholes. 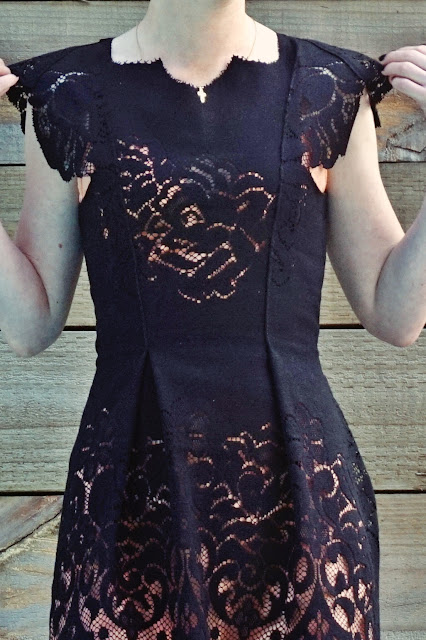 Then I tried it on and it looked terrible.
The darts sat too low, leaving a weird billowy gaping at the bust, and the zipper at the back didn't sit flat either. The neckline was the only thing I was fairly happy with. Even the lace at the armholes was droopy at the back. That was going to be an easy fix, it would just need the extra pieces cut out once everything else was done, but the rest required going right back to the start. 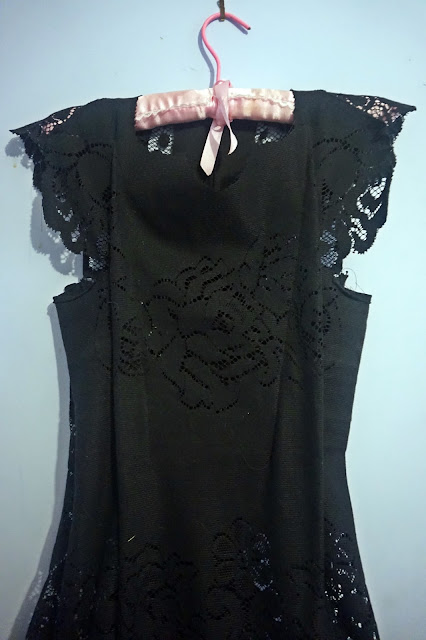 The first change I made was to rip the zipper out and redo it. I decided that I'd just put the zip in straight, rather than playing around trying to get it to fit in to the waist. I also decided to change over to an invisible zip, although I'm not entirely sure why as it's a shorter zipper. So I unpicked all my darts from the front, put small shoulder pleats in at the back to make sure the neckline was even, and draped it back over my mannequin. 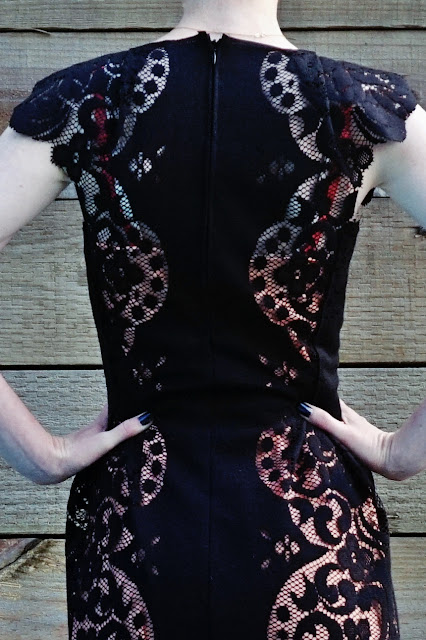 My thought then was maybe I could make the dress so it was fitted at the front but hung loose at the back. So I did a first run of pinning the front in again, and tried it on. Unsurprisingly, it didn't really work. I had pinned the front darts in higher so it was better fitted, but there wasn't enough fabric for it to give the loose effect I wanted at the back. And honestly, I'm not sure this idea could have worked, because trying to keep one half loose while the other half is tight is just too complicated. I'd contemplated using ribbon ties from the underarm to the back, but I really don't think it would have sat evenly at all. 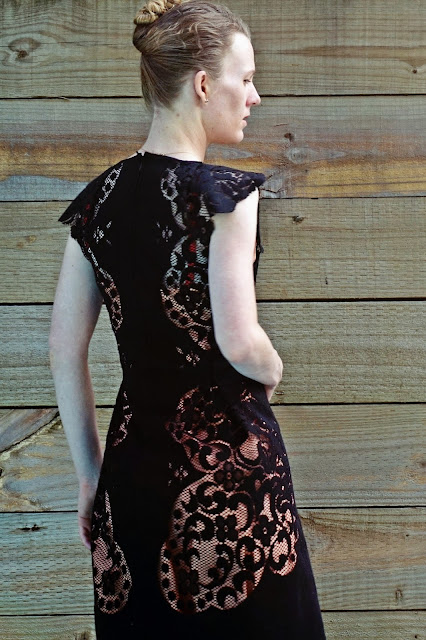 I hadn't sewn anything for that second arrangement, so there wasn't any more unpicking to do, but by this stage it was Thursday night and I was a bit at a loss of what to do. My next thought was to make separates, with a cropped top and high waisted skirt. The lace at the bodice would be long enough to work as a cropped top, but I decided against this idea because I really don't think I'd wear the top. And given the neckline was the first decision I'd made when I saw the fabric and was the one element I was happy with, I didn't want to lose that on a garment I wouldn't wear. So I discarded that idea.
Then I finally worked out what to do. 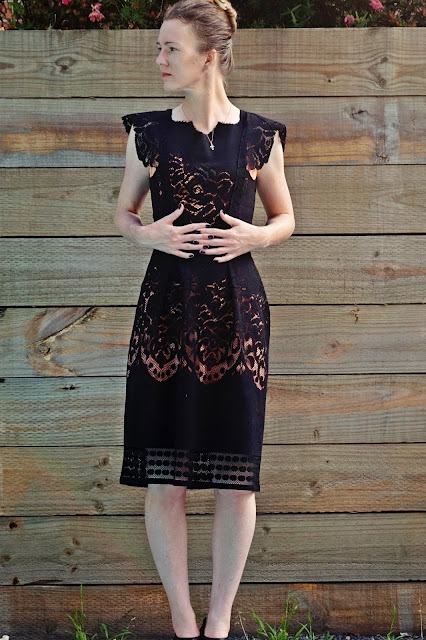 It's an obvious realisation, but if your mannequin doesn't have the exact same measurements as you then pinning and draping a fitted dress completely on the mannequin isn't going to end up fitting properly. The answer, of course, was to pin the dress directly onto myself. So I put it on and folded in two darts for the front and two for the back and pinned them in place. I stitched them down, leaving them open at the bottom so they have a soft pleated effect. And after all of that messing around, mid-morning yesterday I finally had the dress I'd pictured in my head.
Then it was just a case of taking some pictures and sending them in as my entry. 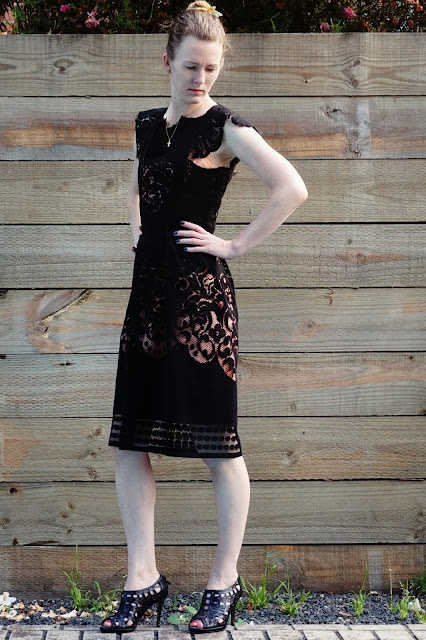 And so that's the saga of my lace LBD. With persistence, sometimes you can manage to pull of the image in your head. Now I just need a reason to wear it!


Posted by Antipodean Stitcher at 22:04