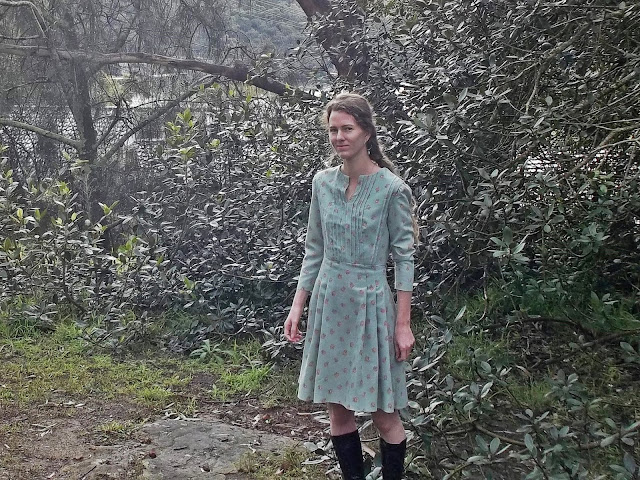 The one good thing about this winter being so cold is I've finally gotten around to using this vintage woven wool that's been sitting in my stash for two and a half years. I found it at an antique shop on the Central Coast and had to buy it. The beautiful soft green with pink and orange roses has a really timeless feel to it. Obviously it was going to be a winter dress, but I had to find the right pattern first. 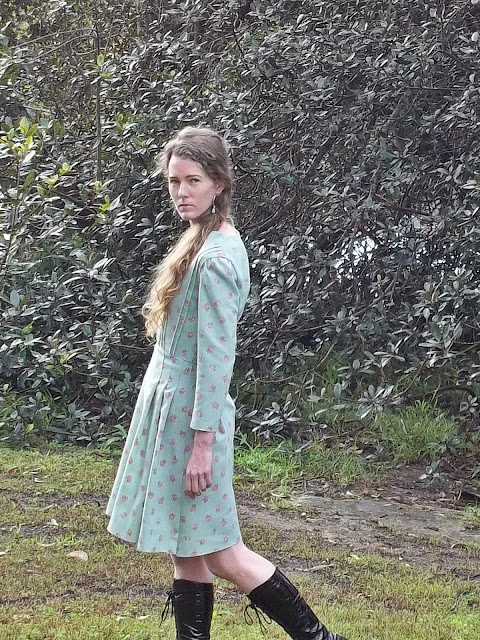 Then a few months back I did a big internet search of free sewing patterns and found the Garden Party Dress from Honig Design. The cut of the dress is really nice, but it's the neckline that stood out with its slashed front detail. It gets to be a high neckline which is good for winter without being too tight or dowdy. The pleated skirt has enough fullness while still sitting flat at the waist. The fabric had a finished selvedge, so I didn't need to hem the skirt or sleeves - yay laziness! 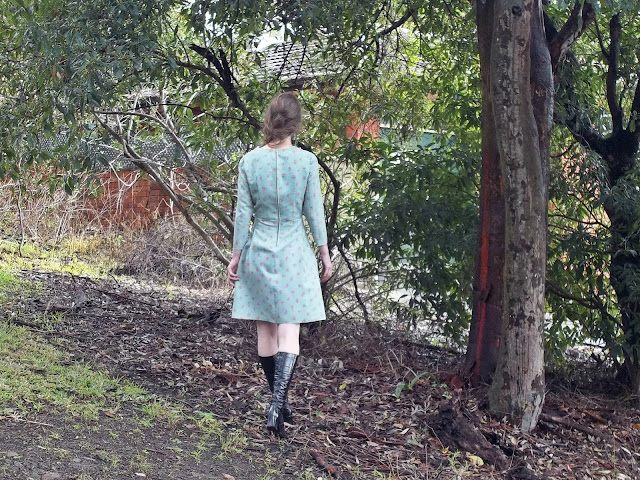 As is usual for me, I made a few adaptations for myself. Firstly, I lengthened the sleeves to bracelet length. Originally the sleeves were meant to finish just past the elbow, but sleeves that length tend to annoy me because they get caught in jumpers and the cuffs cut in when I move my arms. Also, the longer length makes it more of a proper winter dress. To work with the extra length I also narrowed the sleeves a bit so it would have the same softly fitted look as the rest of the dress. 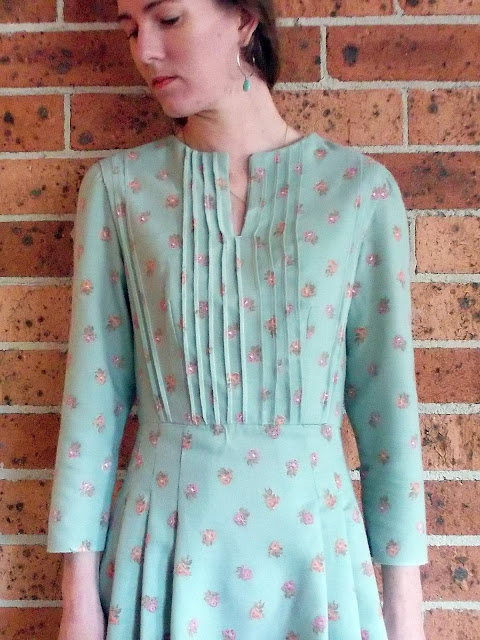 The big thing that wasn't in the original pattern is the pintucking. It was something that I'd thought of for the fabric long before I found the garden party pattern, and I really didn't want to let go of that plan. And I had four metres of the fabric, so I knew if I screwed it up I would have enough left over to make a plain bodice. I didn't have a plan about how to add pintucks, though, and don't have any patterns with pintucking, so I basically made it up as I went along. I widened the bodice at the shoulder seams and neckline, and then added pintucks until the shell was the same size as the lining. I trimmed a bit off the side seams because there wasn't enough for a third pintuck, and I had to add a centre tuck which I initially wasn't happy about, but I think it ended up looking fine. 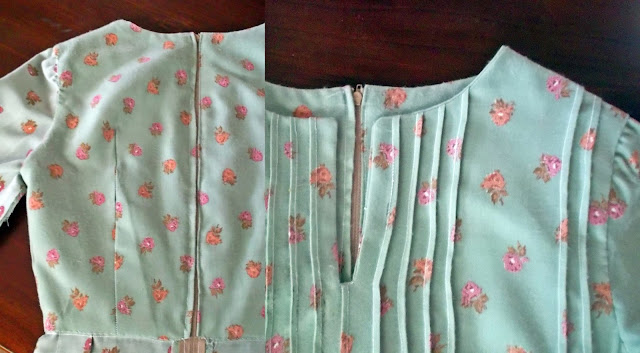 The bodice is lined using the same wool fabric. But because it frays like crazy I wanted to hide as many raw edges as possible. Working out how to set in sleeves while keeping the lining out of the way was a bit of a challenge; attaching the skirt while trying to do the same was even harder because of how much fabric there was to keep track of. Then I folded the seams back in to the bodice and hand stitched the lining down so that everything was enclosed and neat. 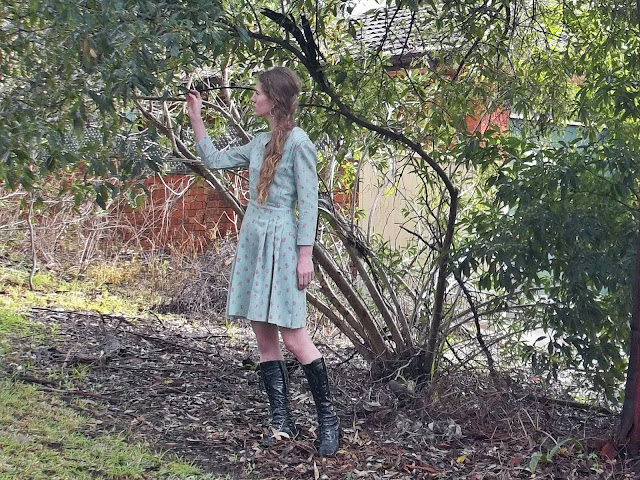 When I finished the dress and tried it on, I thought it had a very sixties folk vibe, like something that would have been worn at Newport Folk Festival when Dylan went electric, or maybe by Michelle Phillips from The Mamas and the Papas. I actually put on California Dreaming immediately after as it seemed completely fitting. So I now have the right outfit should I ever become a sixties folk singer. 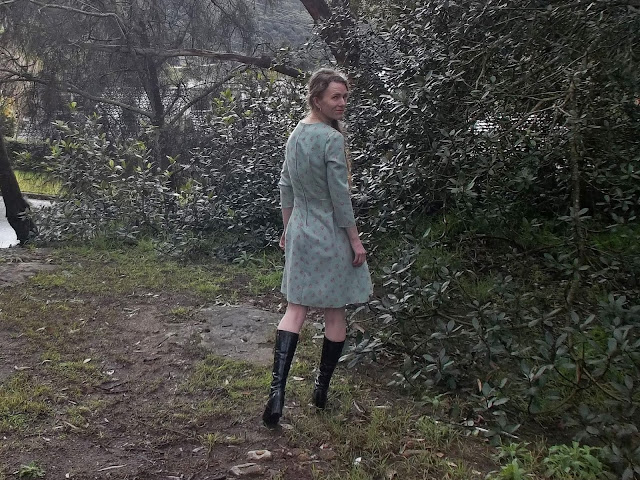 Of course, once I'd finished the dress and washed and pressed it, in came the rain. And with more rain forecast over the next few days I thought I was going to have to wait a while to take pictures. Luckily the rain today only lasted a few hours and I was then able to go out and get my photos, although I did have to be careful not to slip over in the mud!

I really liked making this pattern and love the final result. Given the garden party dress has a few skirt, sleeve, and neckline variations, I'd say I'll probably make it again. Although I don't think I'll try and add pintucks again next time. 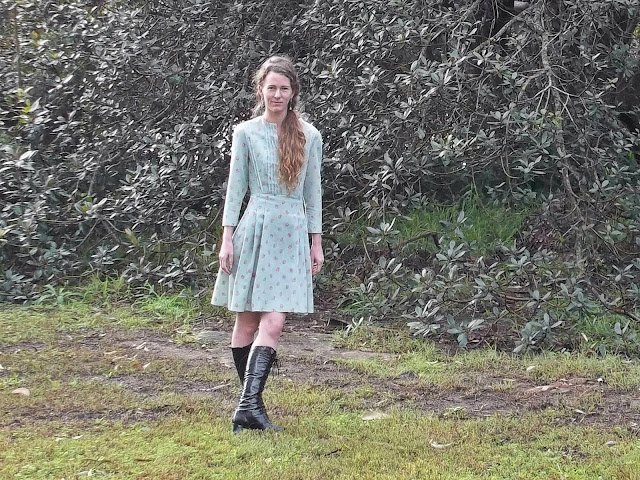 Posted by Antipodean Stitcher at 07:02 6 comments: 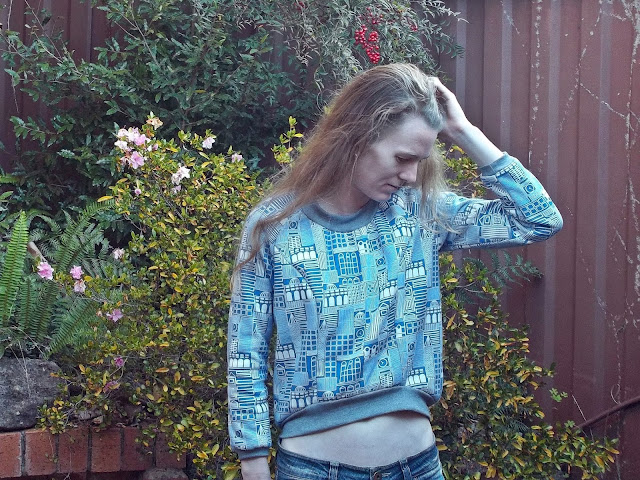 It is cold down here in Sydney, so it's jumper and cardi season. I haven't owned a fleecy jumper in years because I never liked any I saw in stores, but last year I made the Lola Dress by Victory Patterns, an empire line princess seamed fleece dress, and it was wonderful and cosy and easy to make. So I decided it would be a good base pattern to adapt for a jumper. 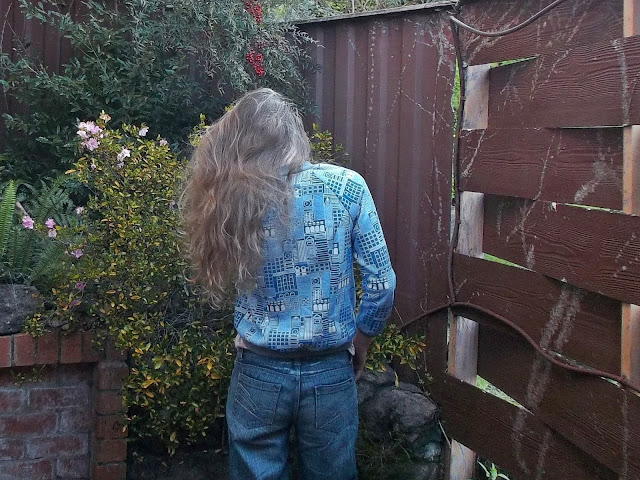 I bought the fabric at Spotlight, in the clearance section, for $8 a metre. They had a lot of other fleeces - there are lots of fleeces with assorted animals on them around at the moment! - but none of them really grabbed me. This one, with windows and clocks and buildings printed on it, was probably the simplest print, and colourwise goes with more thins. And being half the price of the others, I decided it was the best one. 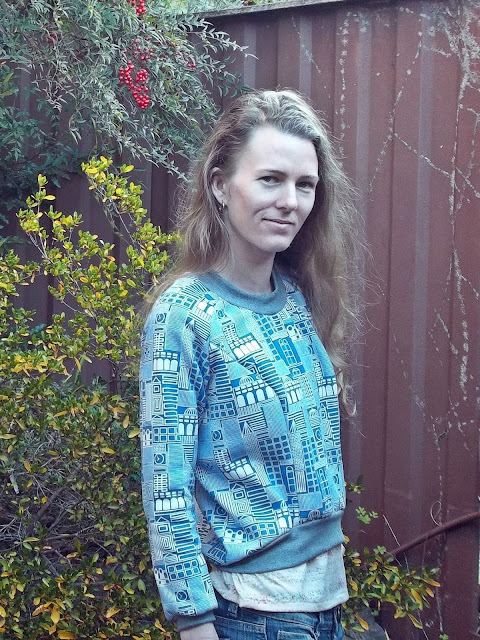 Because the original pattern is an empire line dress with a scooped back seam and elbow-length sleeves, I obviously had to lengthen everything. I also went up three sizes so that it would be roomier without  being too oversized. I got the roominess right, but I didn't quite add enough length. Even though I measured it before cutting it out, even thinking I'd added a bit more than I might need but would be able to trim it back if necessary, my measuring was obviously off. It finishes about an inch and a half shorter than I'd planned on the sleeves and the waist, making it a slightly cropped jumper when it wasn't really meant to be. But the cuffs keep the warmth in, so the length isn't really an issue. 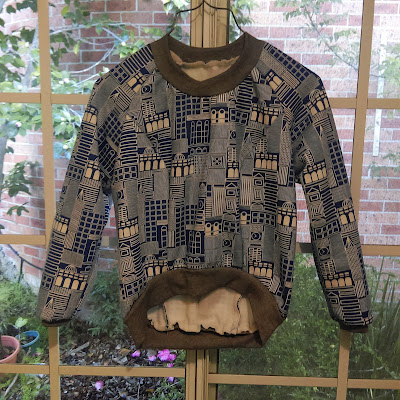 I like that the curved hem makes the jumper longer at the back. I don't know about others, but I find that my lower back being exposed on a cold day makes me feel colder than anything else. Although the jumper is a little cropped, it still ends far enough down at the back to keep me covered up and warm.

The jumper was very easy to make, the instructions are straightforward and easy to follow. Although attaching the ribbing is a bit tricky. I swear it takes more time just to get the ribbing pinned evenly than it does to sew the entire jumper! I really think it needs three hands to properly get it in place, unless you want it to be very loose. 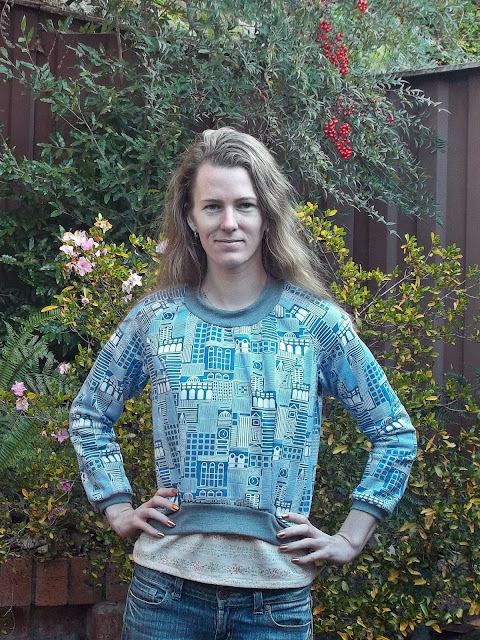 Posted by Antipodean Stitcher at 01:02 No comments: