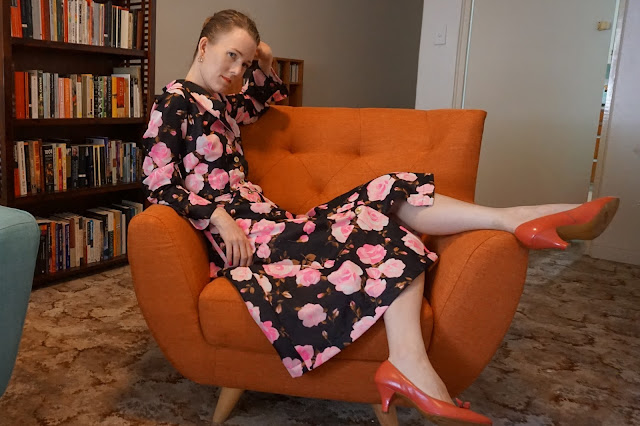 This dress has taken about six weeks from start to blogging. There's quite a few pieces to the pattern, I had to add a lining despite the pattern not originally being lined, and I've both been busy at work and moved house, so there was a lot to do both with the sewing and with the rest of life. 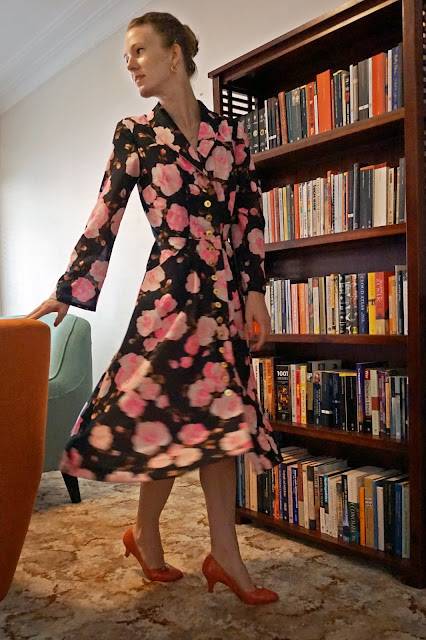 The pattern is a 1950s Australian Home Journal pattern, number 5210. It's a shirt dress with shawl collar and pockets. The envelope describes this as a house frock, which makes it sound like something Betty Draper would wear. The big bright pink roses also look very Betty, so I thought I should accessorise the photos to match the dress. And my armchair really matches the era pretty well, too! 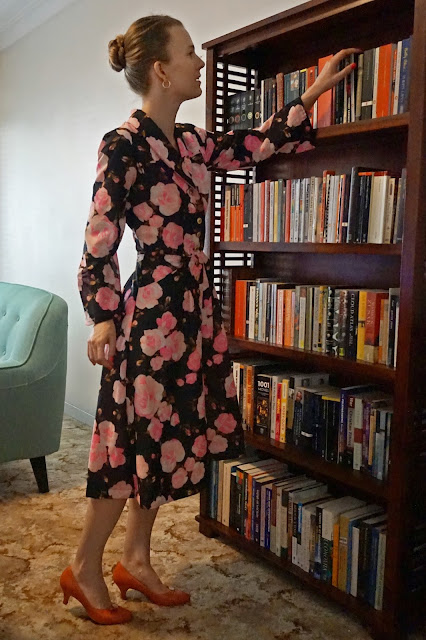 The fabric is one I picked up at a Sydney Spoolettes fabric swap earlier in the year. The fabric is Australian, the selvedge says it is from Marchioness Fabrics. It's very thin voile, almost gauze-like. This meant there was no way I could use the fabric without lining it. But I didn't want to lose the soft drape that it has. I also didn't want to lose the colours, so I had to find something to be a lining that wouldn't show through or dilute the vibrant pinks of the roses. 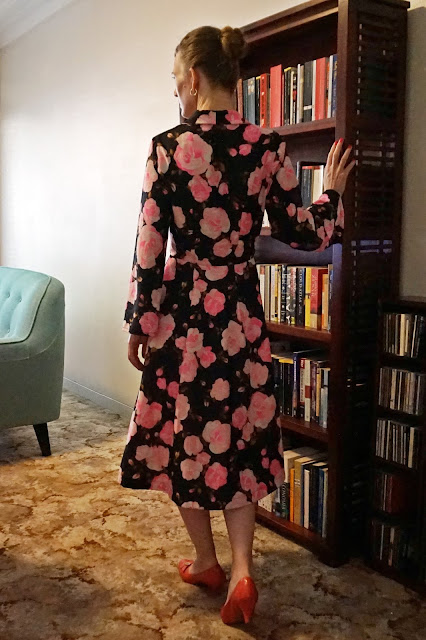 I found a baby pink cotton voile at The Fabric Store that fit the bill. Of course, two layers of voile still isn't particularly thick. For the bodice it was fine, and I decided to leave the sleeves unlined, but the skirt would need more than two layers of voile. To fix this, I decided to double line the skirt. I cut one set of the baby pink voile to be the lining, and another set which I stitched straight on to the main fabric, treating it all as one single piece. 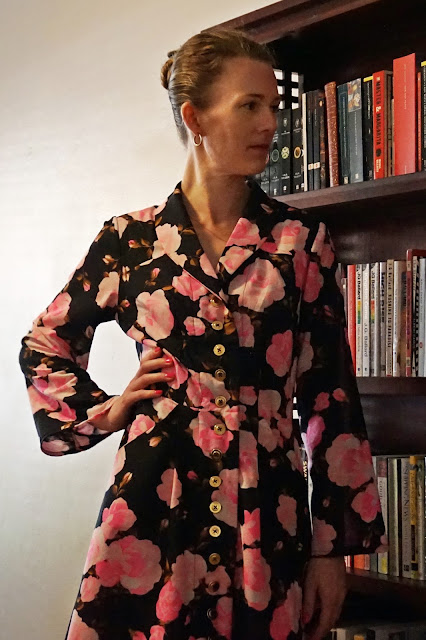 I started work on the bodice first, putting in the front and back darts. There are also front insets at the yoke. They were a little daunting to insert because of the right angle at the bottom edge, but in the end they went in fairly easily. And the print is, well, a bit overwhelming so the insets aren't really noticeable - you can just see the line of them on the above photo if you look closely. On the pattern envelope the insets are edged with lace so they stand out, but that wasn't needed with this fabric.

The skirt was trickier to do because of the third layer of fabric. Although I stitched the second layer of pink voile onto my main fabric so I could treat it as one, it was still a bit slippy. I left the bottom hem until I'd attached the bodice and skirt together, and then left it to hang for a weekend so the hem would settle. It seems to have ended up even, but I will keep an eye on it in case the lining and skirt get out of alignment. 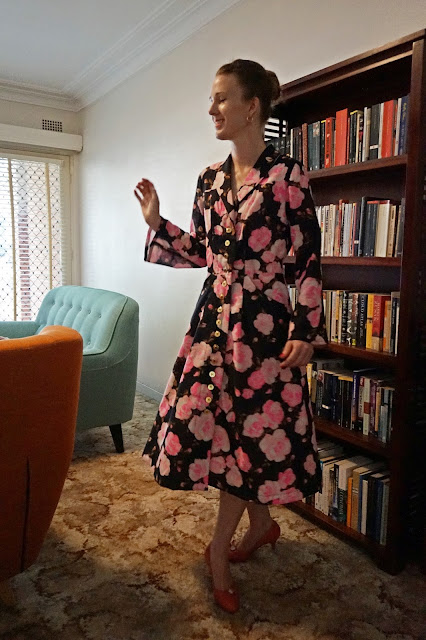 Being a shirt dress I needed to make sure to stabilise the front. But I wanted to make sure I chose an interfacing that would work with how light the fabric is - both in terms of the weight and the gauziness of it. In the end I chose a black net-like sew-in interfacing. It did mean I had to first stitch the interfacing to the facing, but it sits and flows better than an iron on interfacing would. 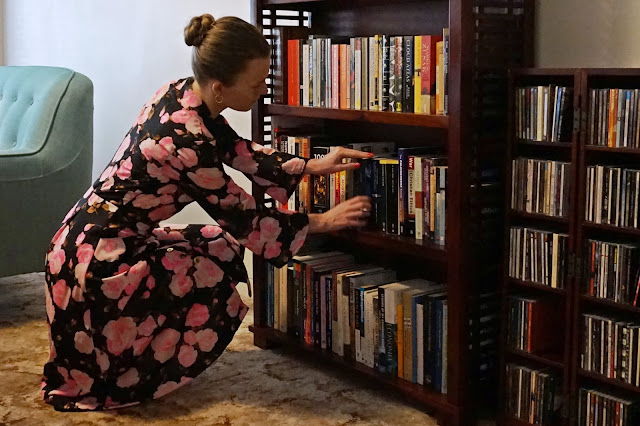 The original pattern had short sleeves, but I didn't think they were quite right for this fabric. I looked through my other patterns from around the same era, and decided I'd add the sleeves from my DuBarry 5265 coat dress pattern. The sleeves are meant to have cuffs, but I tried the dress on before adding the cuffs and decided they'd be a bit too overwhelming, and the sleeves would work fine it I simply hemmed them. 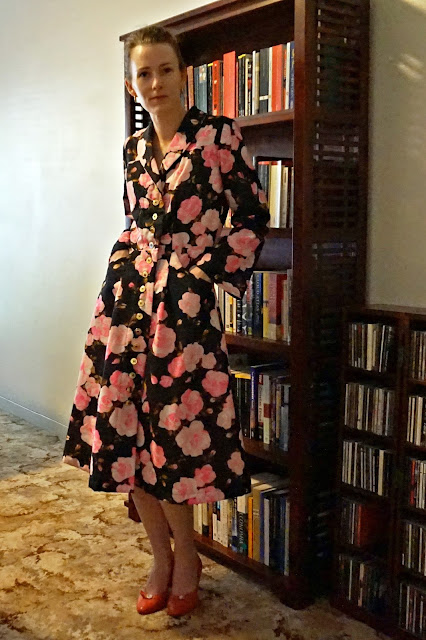 I actually had all the sewing done more than a week before I moved, as I needed to be able to pack up my machine and fabric. All that was left to do was rip open the buttonholes, add the buttons, and hid all the loose threads. Still, I had to get set up before I could even start on those last elements, and there are sixteen buttons on this shirt dress. The interfacing is also relatively solid but the fabric is light, so I wanted to be very careful when ripping the buttonholes open. 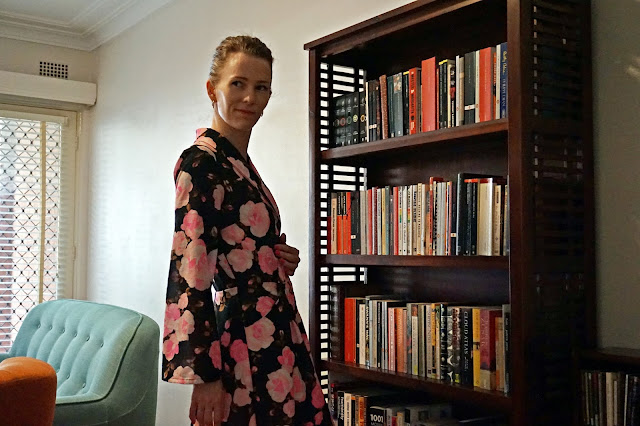 The buttons were probably the hardest choice in making this dress, because I didn't know what would suit this fabric. It obviously needed a large number of buttons (sixteen in the end!), but what would complement the flowers? I have a large collection of buttons, but I didn't have anything that worked, or that had enough buttons. I wasn't going to find something that faded in to the background on this fabric, so I chose the gold as I thought they would stand out but not clash. 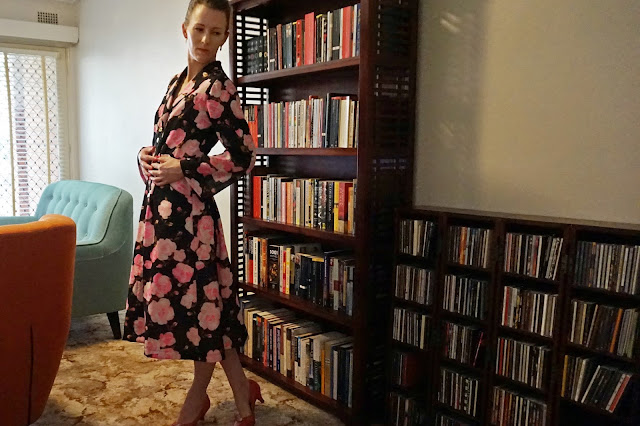 I'm really proud of this dress. To be honest it feels a little fancier than I normally am, like it needs a very put-together person. Not simply something that is pulled out of the wardrobe on a whim. But the fabric is just so stunning, and so perfectly suited to the pattern, so I'm sure I will find reasons to wear it. Although probably without the heels. 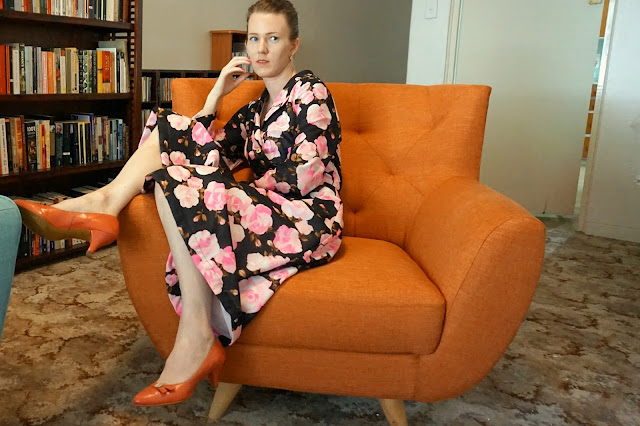 Posted by Antipodean Stitcher at 04:14 7 comments:

A Trio of Travelling Trousers 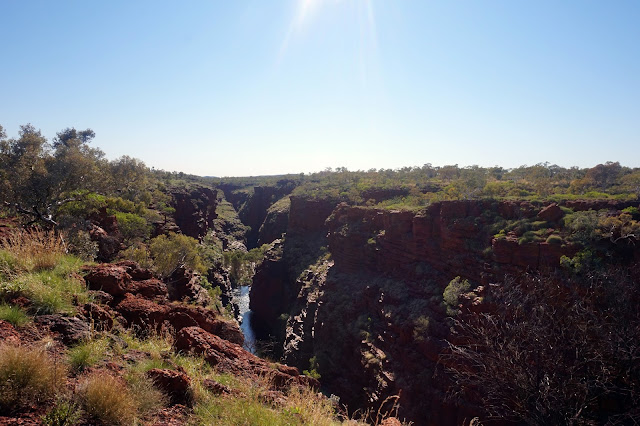 I had planned to post these three two months ago. I made them all to take on a trip to Western Australia and was going to take pictures of me wearing them on beaches and bushwalks, but didn't end up getting usable action shots. So instead they went into the wardrobe until I pulled them out today. 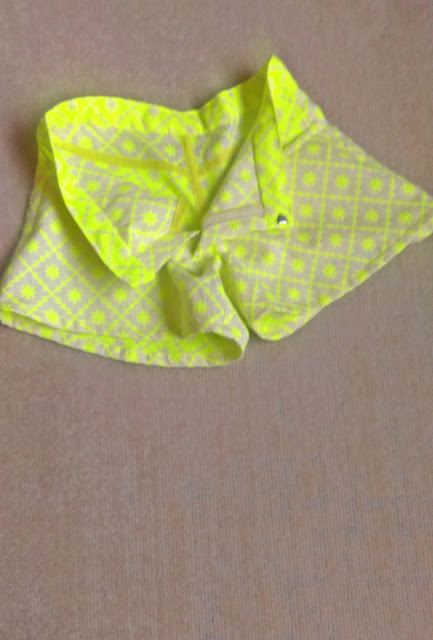 First is a pair of very bright summer shorts. The fabric is from Spotlight, and I'm really not sure what it is or what it's meant to be for. It's fairly loosely woven and frays like crazy. Because of that I decided my normal thing of doing French seams wouldn't be enough. So instead I covered over each seam with bias binding, stitched in at the seamline, then folded over and stitched down at the edge of the seam allowance. I still don't think they'll last very long, though, because the fabric doesn't really stand up to much. 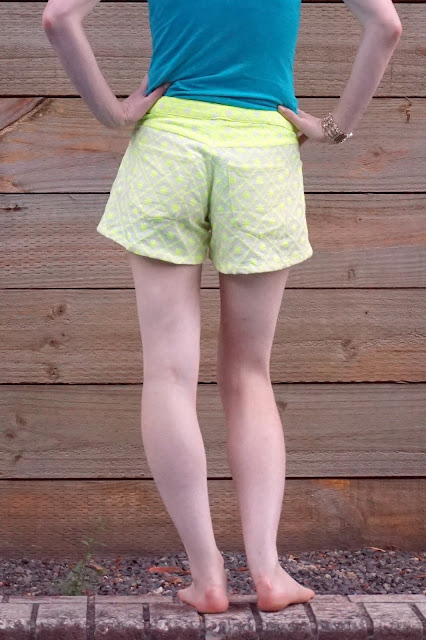 Both these shorts and the next ones were made using Burda young 7050. The pattern seems to now be out of print, but it's a pants pattern that's fitted to just below the knees and then flares out. Obviously I altered the pattern for the shorts. For these bright yellow ones I traced the top of the pattern to mid-thigh on newspaper, then slashed and spread to make them looser. These shorts were for lazing on the beach in Broome, although it ended up raining despite it being the dry season, so no beach photos for these shorts.

The second pair of shorts are just practical, dark khaki/green bushwalking shorts. On my holiday I did a tour from Broome to Perth, with lots of time spent in national parks, particularly Karijini in the Pilbara. It's a beautiful area, but hot even when it's technically only just spring. So shorts are best for walking there, especially when you get to gorges where you need to wade through knee-deep water! 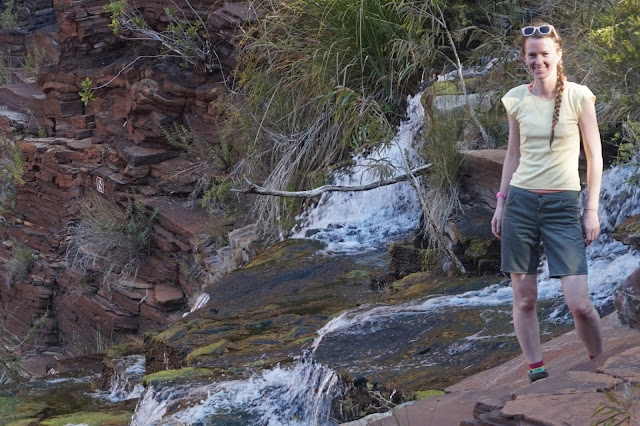 I again used the Burda young 7050 pattern, and also widened it slightly from the original so they'd be more practical to wear. As you can see these are also longer, again for practicality's sake. They aren't the most exciting thing I've ever made, but they fit the bill for what I needed. 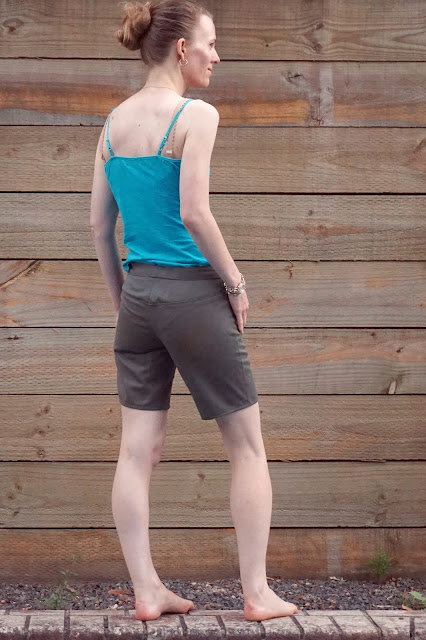 Thirdly, I made these slim fitting cargo pants. The pattern is Simplicity 2261, which is also out of print. I made the in a solid cotton drill in a stone colour. I picked this fabric up in Cabramatta when some of the Sydney Spoolettes had a shopping day. The pants are still relatively slim fitting, but are loose enough to climb on rocks and along steep tracks, so they are fit for purpose. 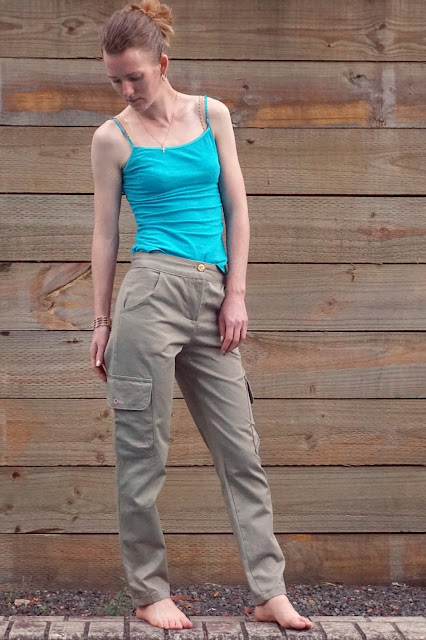 This pattern is relatively straightforward, as far as pants go. I needed to read the instructions of how to insert a fly about three times before I knew what to do, but I got there in the end. I'm mostly happy with how they turned out, apart from the press studs for the pockets. I thought they'd be a more practical choice of closure for pants to wear while bushwalking, but one of them pulled off the fabric when I tried to unsnap it. I think I'll practice on some scrap fabric before I use press studs again! 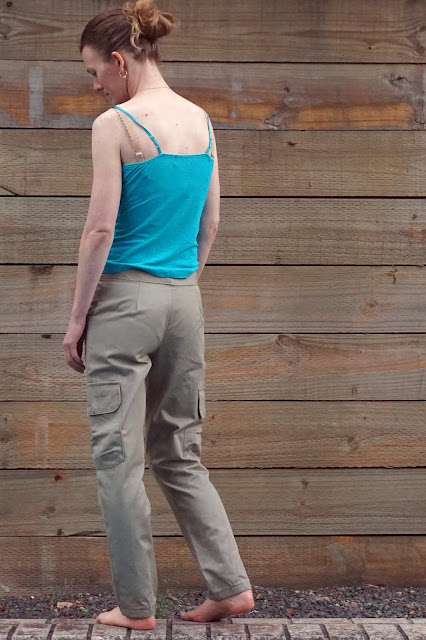 Lastly, although this is a sewing blog I had to include just a couple of photos to start and end this post with some of the amazing scenery in WA. The top photo is Joffre Gorge in Karijini National Park. That's at the top of a track that goes almost vertically down those cliffs, not a walk for the faint hearted (or the sore jointed!). Below is sunset at Pardoo Station. Both places are a long way from civilisation, and both are simply breathtaking. If you ever get the opportunity to see that part of the world, take it! 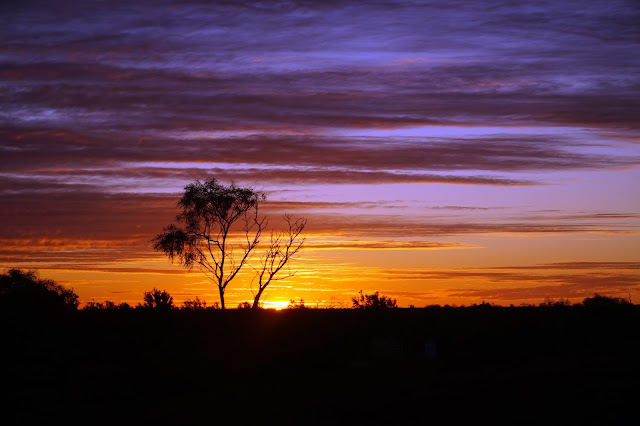 Posted by Antipodean Stitcher at 04:49 No comments: