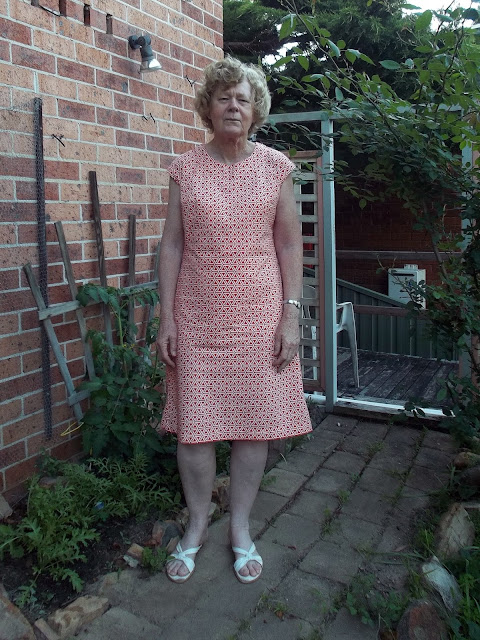 Most of my sewing is selfish sewing. I started sewing to make things I wanted to wear because I found what was in shops boring or expensive, and have pretty much kept to making things just for me. But this year I've made a couple of things for others. This is the first one to make it on to my blog: a dress for my mum. 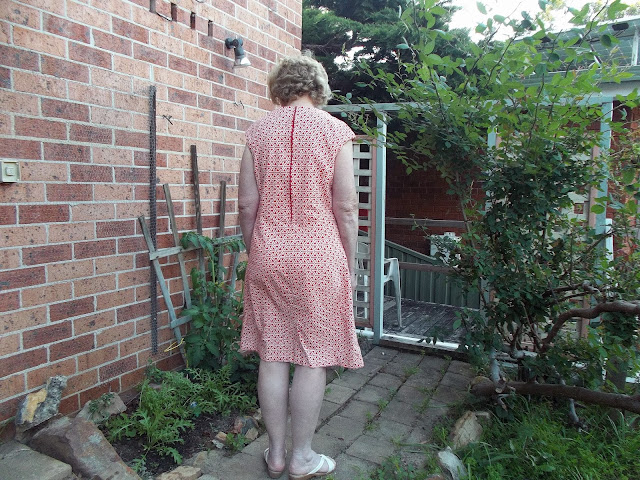 This fabric, as with that used for my beach romper and casual pants was bought in Benalla years ago when I was doing fieldwork there. I bought it even though I knew the colour really wasn't me - bright orangey-tomato red doesn't particularly work with my paleness - but the print, which looks like some sort of Op-Art/Escher mix is just amazing. And at $5 a metre, too hard to resist, so I bought some. 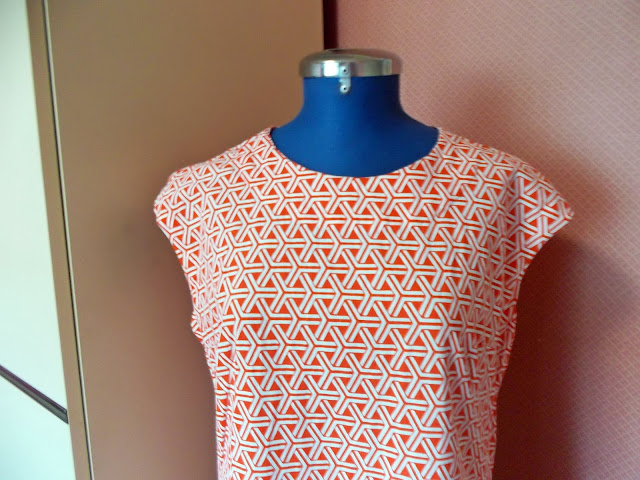 The fabric was always going to work best on my mum. Her skin tone, hair, and eyes really suit reds and oranges. But it's taken me a long time to get around to making this dress for her - the fabric was even sitting out near my machine for a good three months before getting started on making it. Part of that was choosing the right pattern. Obviously I wanted to keep the seam and dart lines to a minimum so they didn't distract from or mess up the print. That meant choosing a simple shift dress, but surprisingly I don't have many of those, and none that were quite what I wanted. In the end I used Simplicity 7380, a vintage 1967 pattern, as a base and made some changes. 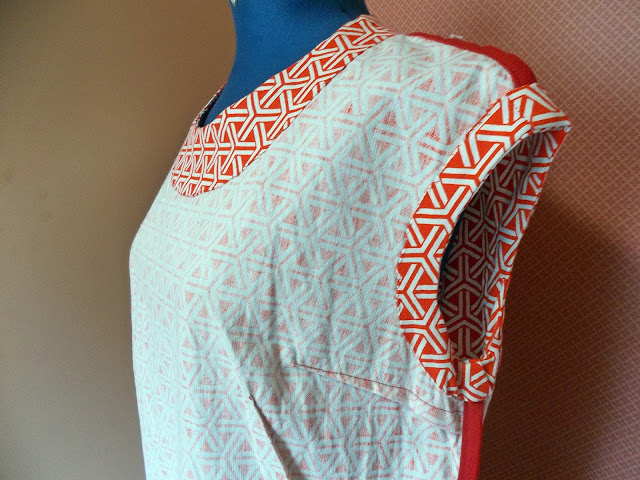 What I liked about Simplicity 7380 as a pattern were the double darts, with both a normal bust dart and French darts, which give just a little bit of extra shaping while remaining relatively unstructured. But the pattern is also high-necked and with sleeves, neither of which I wanted. Changing the neckline was simple, I just cut the piece lower in the front, but for the armholes I wanted little fake cap sleeves. To do that, I used my French curve to taper the shoulder pieces out and down, and redrafted the armscye from the side seam up to the new shoulder seam. The pattern was also a smaller size than needed, so I did the terribly lazy upsizing by simply placing the two pattern pieces about an inch back from the fold and cutting it out like that. Horribly bad practice, I know, but it worked, so all's fine, right? 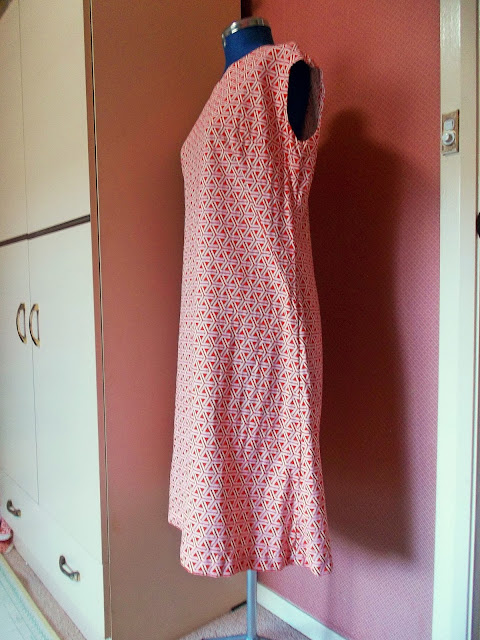 Another reason it took a while to get around to making this dress was that the fabric frays a lot. It's fairly structured with a thick but loose weave (a cotton duck, maybe?), so I definitely had to do something to stop it fraying. I decided the best option was to cover the seams in bias binding. And for the zipper, I double folded the fabric so that the raw edge is hidden inside the stitching. It meant it took longer to make this dress than it would have otherwise, but it should also mean it's wearable for longer and doesn't need repairs. And it means the insides look much prettier, too. The arm and neck facings and hem were also hand sewn so there would be no visible stitching distracting from the print of the fabric, to keep the clean lines. 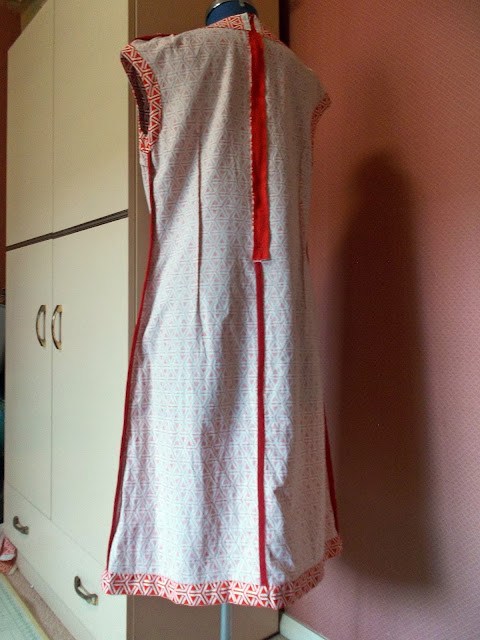 I also did my best to try and pattern match the print when putting this together. I couldn't quite get it perfect to the point of being invisible, but I at least made sure the horizontal lines matched up for the back seam and the side seams below the darts. If I'd had more fabric I might have been able to match with the diagonal lines and triangles as well, but I didn't. And it would have been quite a bit of extra effort for something only noticeable if you look really closely. But the horizontal lines did come in handy for the hem - I didn't have to do any measuring, I could just fold with the line and knew it would come out evenly. 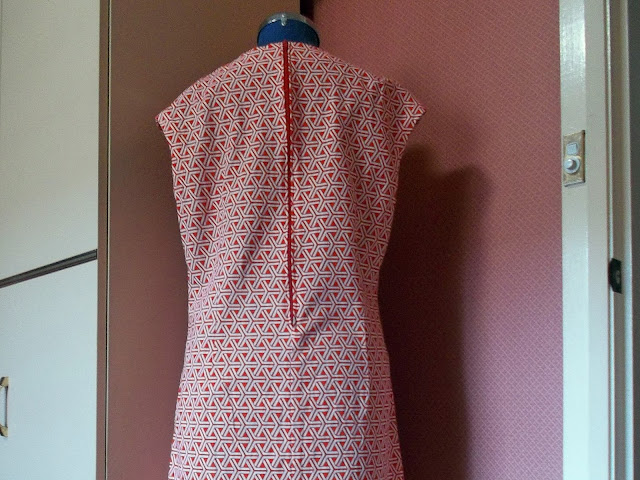 This dress was a simple make, even with the resizing and adjustments. And I'm really glad that I was able to put this fabric to good use, in making a dress in a style and print that suits my mum so well. 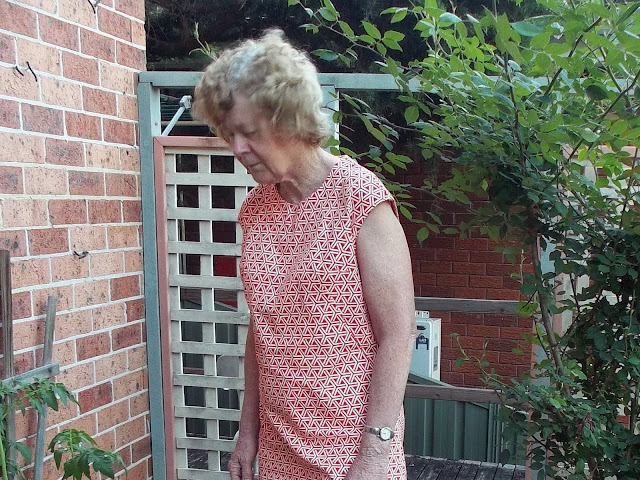 Posted by Antipodean Stitcher at 21:38

Email ThisBlogThis!Share to TwitterShare to FacebookShare to Pinterest
Labels: 1960s, dress, sewing for others, summer, vintagepledge