Averting Disaster in a Denim DuBarry 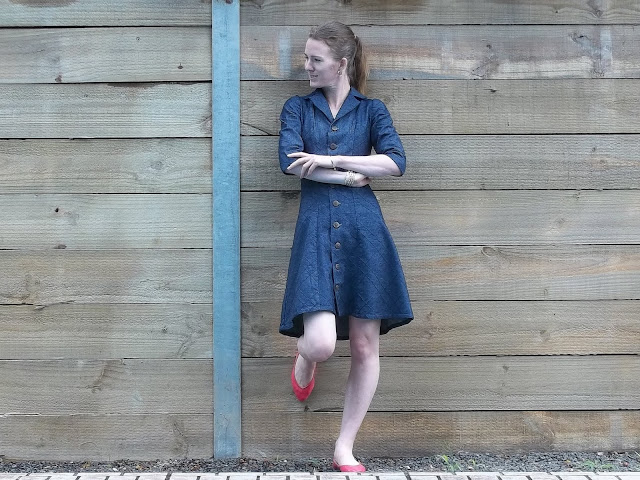 Getting this made was a bit of a saga. It's meant to be a transseasonal piece, but it's only now been finished, at the end of October. The pattern is early 1940s, but the denim and shortened hem takes it via the 1970s. 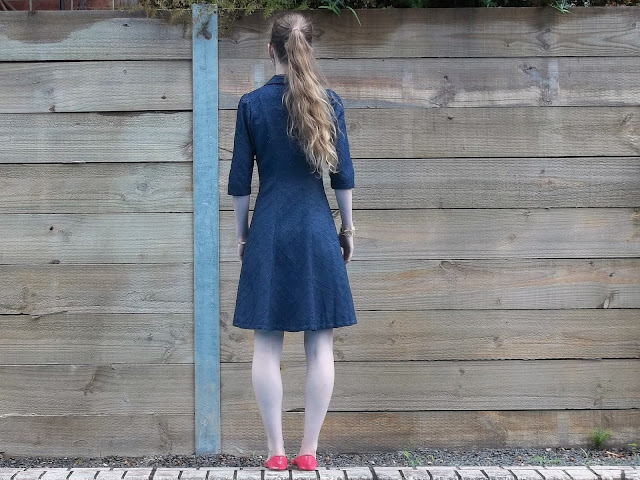 The pattern is one I bought at a vintage fair about four years ago, but have been a bit scared to use. It's DuBarry 5265, and it's extremely elegant. DuBarry was a pattern brand produced by Simplicity in the 1930s-40s, and they're hard to find and often pricey. This is the only one I own, and it's from 1942, so I'd been saving it until I found something I really wanted to sew it with. And so obviously denim was the perfect match for a classy 1940s pattern. I kind of think that the designers of the DuBarry patterns might be a bit horrified at making a dress out of - gasp! - denim, but I'm really happy with the choice of fabric. 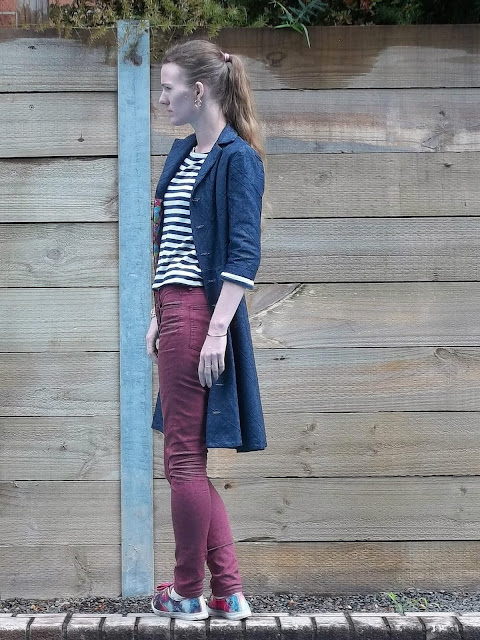 I've been scared of working with denim for years. I've used almost every other fabric happily, even tricky fabrics like lace, lycra, velvet, and sequins with no problems. But denim? I've taken up jeans once or twice and it was a horrible experience. But I decided I wanted to conquer that fear and be able to use denim myself. Seeing lots of other sewing bloggers who've made their own jeans, denim jackets, etc, I wanted to join in the fun. 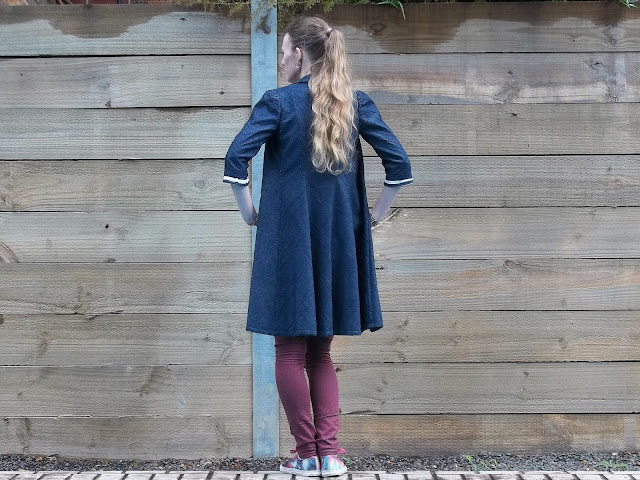 This lightweight denim is from Spotlight. I chose it because of the criss-crossed diamond/grid pattern and its nice dark wash. I thought that I'd make the diamonds match up nicely along the princess seams of the coat dress, and it would look fantatic. Well, after much frustration folding the fabric this way and that, I discovered that the grid lines are completely uneven! It was absolutely impossible to fold the fabric in a way that would let me get even the same pieces to have matching lines, let alone matching each piece's seams to its neighbouring piece. Coupled with the fabric being cut on a slight diagonal and undersized by the sales assistant, fitting the pattern pieces on the fabric was going to be difficult. 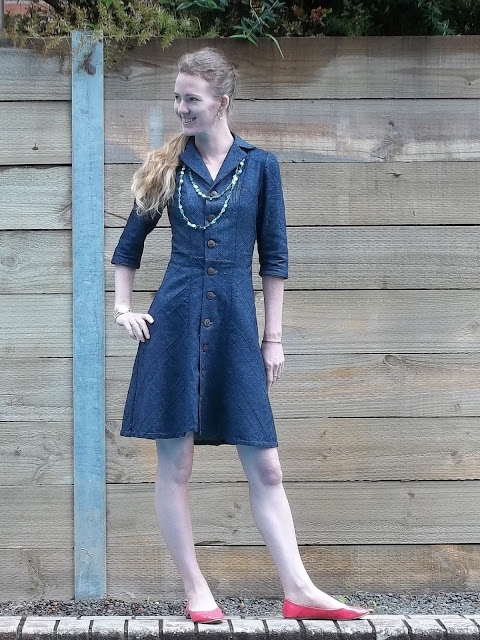 And then I compounded it all by for some stupid reason cutting out four side back pieces, and missing the centre front pieces. I didn't have enough fabric left over for the centre front pieces, and the pattern piece wouldn't fit properly on the extra side back pieces, so I was a bit stuck. And I still hadn't cut out the front facings, either, or the sleeves.  I didn't want to trek back to Spotlight just to get another foot of the fabric, so I looked at the extra side back pieces as well as the scrappy bits of fabric I had left to see what I could do. I had one rectangular piece about 60cm long left, which was good for the sleeves. Because that piece was smaller, those are probably the only part of the dress where the gridlines of the two sides actually match. The centre front and front facings were going to be harder. I couldn't fit either pattern piece completely on the side back pieces, and I didn't have any offcuts large enough for them, either. In the end I realised I simply didn't have enough of the denim to cut all four pieces out completely. The facings were going to have to be at least partly in another fabric. Because the top of the facings is visible as part of the collar, I wanted them to be denim, but the rest of it could be in another fabric. So I focused first on the centre front pieces. They were going to have to be cut as two halves, joined at the waistline. So I marked the waistline on my pattern piece, and then cut the top halves out on my extra side back pieces, and the bottom halves on some of the leftover denim. I was then able to use the last bits of the extra side back pieces to cut out just enough of the front facings for the collar and top button - genuinely the exact minimum fabric I needed. It pays to be economical with pattern placement and fabric use! For the rest of the facings I was planning to be sensible and use something neutral, but going through my box of leftover fabric I found this one near the top and just couldn't resist. But pink and blue flowers on a bright yellow background is just so much better than navy or black cotton. 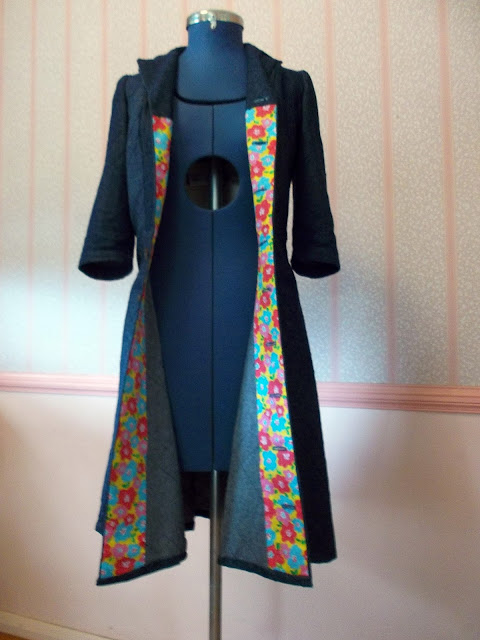 I have to confess that when I cut out this dress I didn't actually own jeans needles. I had some new size 14 and 16 needles, and the denim is lightweight, so I thought I'd give it a shot with them.
No. Bad idea.
It worked okay to join the two centre front pieces, but when I tried to do a seam my thread broke after about 10cm. The pattern does say that the dress is meant to hang basted (or, in my case, pinned) together for a minimum of 24 hours so that the hem can settle. It ended up being closer to 24 days by the time I'd bought jeans needles, made mum's dress, and was able to get back to this. But once I had the jeans needles, it sewed up like a dream. I'm sure those of you who've sewn with denim before are rolling your eyes at my bad sewing laziness, but at least I've now been converted to jeans needles. 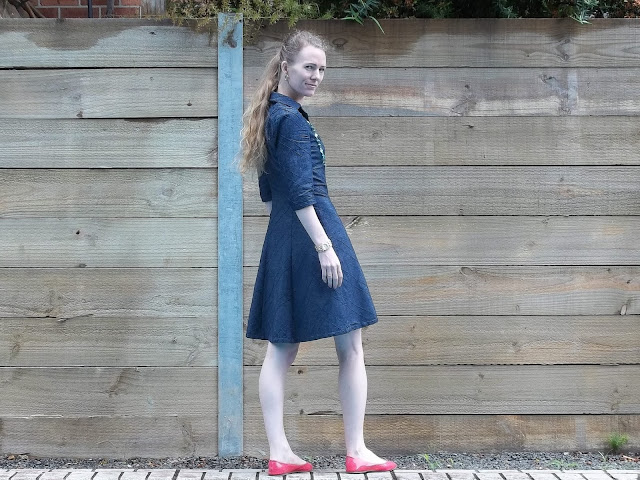 I made a couple of changes to the pattern. As with all early 1940s patterns, the hem for this coat dress was originally below the knees. It's not really a length I like, not that I had enough fabric for it, anyway. So I shortened the hem to finish just above the knee, which makes it more wearable and fresh. I also decided on elbow length sleeves, rather than the short or long sleeve options of the pattern. The sleeves are also slightly narrowed in, because the original sleeves are gathered at the cuff. The sleeves also have fairly full sleeve heads which I was worried would be too puffy, but they're actually not all that big. But they do allow full movement in all directions with no pulling, which not all dress patterns do. 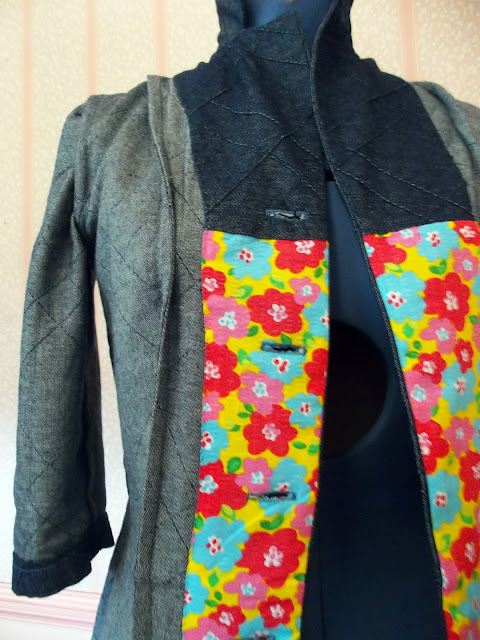 All the seams are once again French seams. Given this is a coat dress (and one that also works well as a coat), I wanted the seams to have a more polished finish, and I think the French seams do that. Of course it added a lot to the time it took to make the dress, and a bit of thought to the order I needed to do the seams in, but the final look is just right. The facings and hem are hand stitched, which took hours. In total there's got to be more than 20 hourse of sewing - both machine and hand - in this dress. 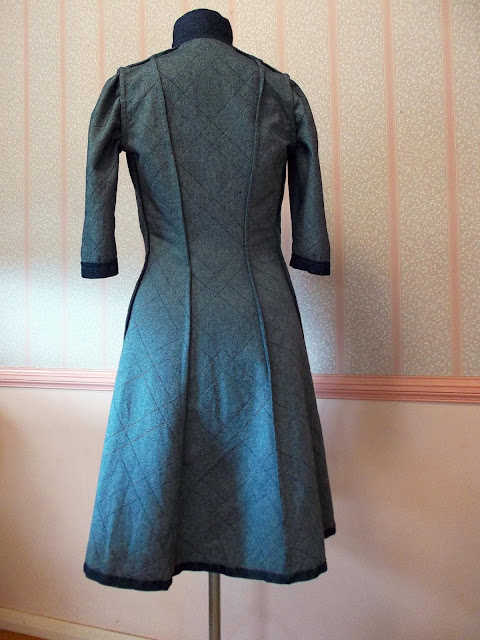 For the buttons, I decided that I wanted something that suited the denim more than that 1940s. This dress is basically vintage-modern, rather than vintage-costume, so I didn't think about matching the era. I briefly thought about metal buttons like jeans and denim jackets have, but decided they'd stand out too much, rather than blending in to the dress. So my next thought was dark wood. I didn't own any, so next time I was in the city I had a look in Lincraft at their button selection. They had some wood buttons, but they were all either too small, or too big, or too light. Then I spotted these coconut shell ones. I've actually used the back, rather than the lighter front, but they were just the colour and feel I wanted. 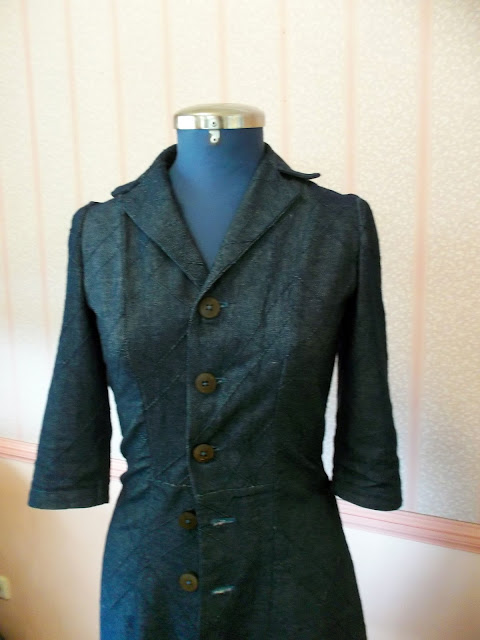 It's a coat dress, but making it with denim it really does work as both a coat and a dress. And yes, I am wearing it here with jeans so it is double denim - but at least they're maroon leopard print skinny jeans. 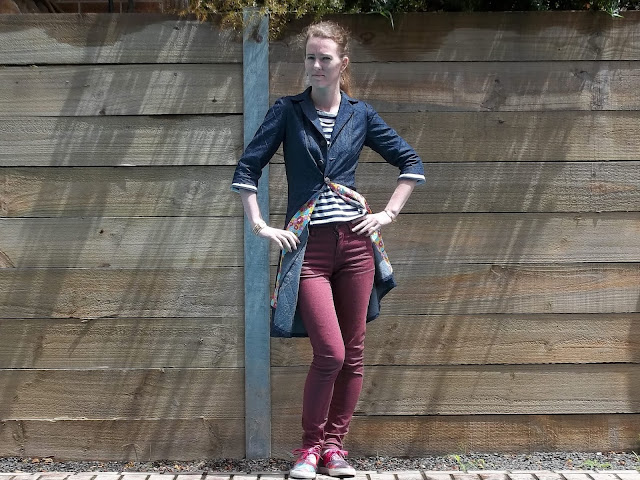 The wildly varying light levels in the photos are because of the weather. After storms yesterday and morning showers, I managed to catch a break in the rain, so the sun was sometimes out, sometimes behind the clouds, pretty much changing between every shot.

This took a long time and a lot of work to make, but final product does, I think, make up for the time and stress. And although it's a coat dress, it works as both a coat and a dress, so two items for the price of one! But definitely the effort of five. 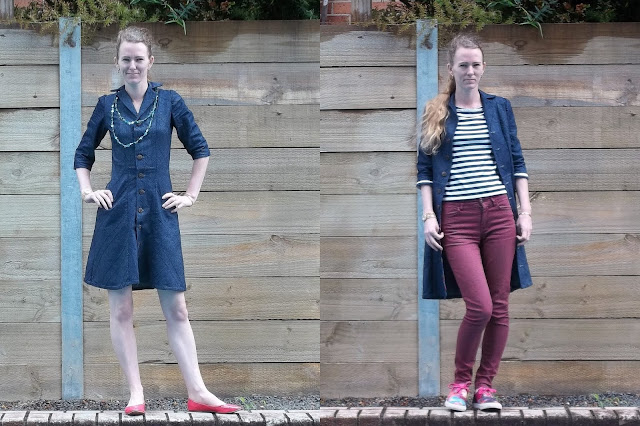 Posted by Antipodean Stitcher at 04:33