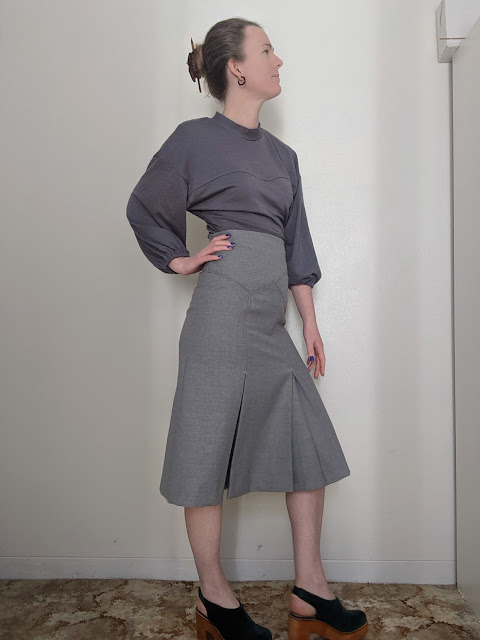 Three new makes for the price (blog post) of one. This skirt and two tops were made in the last few weeks, and bring my Whole 30 fabric usage to 7.5 metres.

This skirt is one I've been meaning to make. I've had both the fabric and the pattern for at least a couple of years. The fabric was bought at Pitt Trading when they still had a physical store, and is a wool twill. 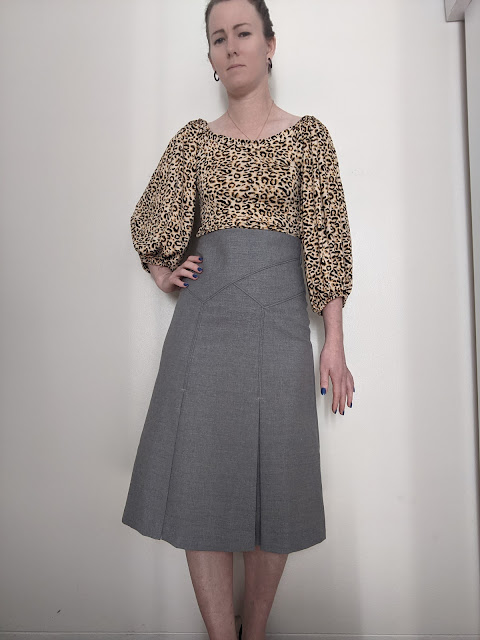 The skirt is fairly simple in design. It's a 1933 skirt from the McCall's Archive Collection. What makes it stand out are the overlapping triangular yoke pieces and lowered box pleats, both accentuated with topstitching. It also has a raised waistband which sits just above the natural waist. The wool twill has a good body to it, so it holds the shape of the pleats very well. 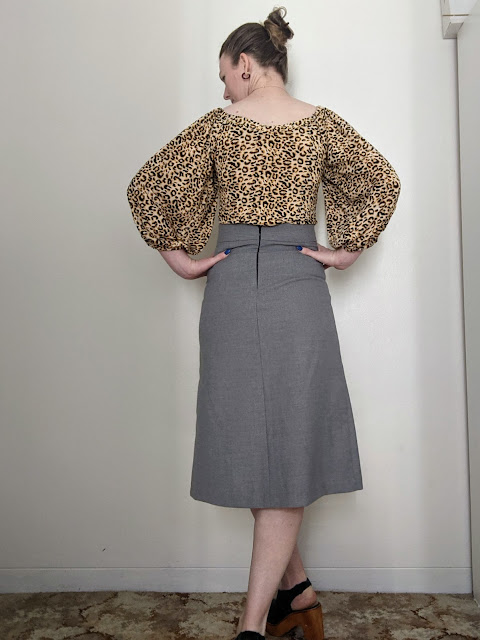 I raised the hem by about an inch to make it a bit  more modern and wearable. It's still very much a 1930's skirt but in a way that feels vintage without becoming costumey. The topstitching at the corners and top of the pleats isn't quite perfectly aligned, but the lines in a grey just slightly darker look great. 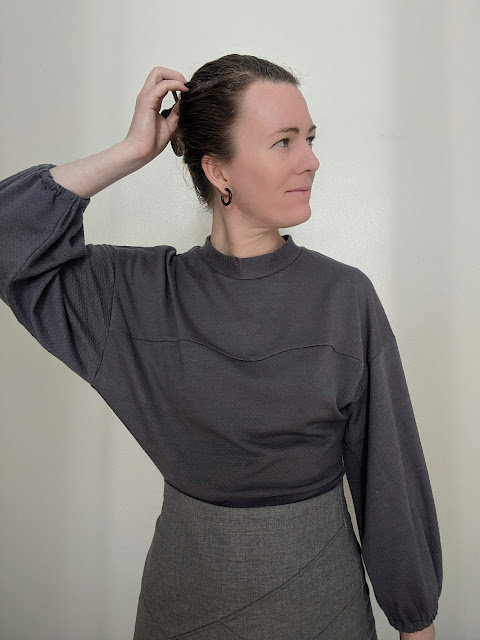 The first top is an adaptation of the Eloisa pattern from Named Clothing's new Building the Pattern book. The book's six basic patterns each have multiple variations to play around with. For this top I used the upper front, back and lower front 1 each extended approximately 10cm, the puff sleeve and the neckband. The top was still slightly too short so I added a hem band which I don't entirely like the look of, but if I wear it tucked in like with this skirt it won't be seen. The batwing shape of the top looks nice tucked into a waistband. 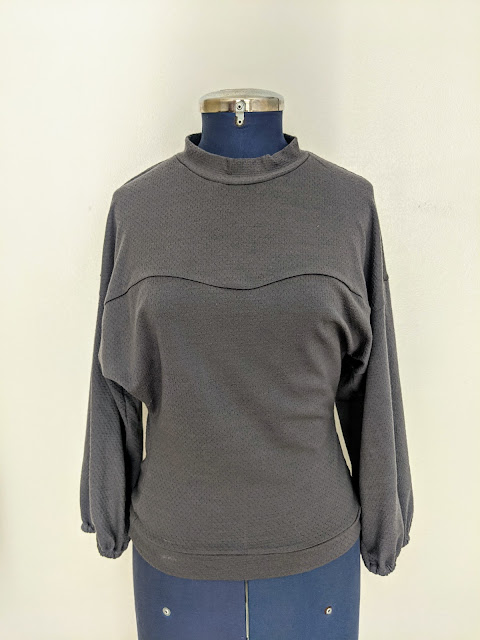 The fabric is a charcoal merino jersey from The Fabric Store. It's lightweight with tiny textural pindot perforations, but the pindots do not make it seethrough. This top was sewn up entirely with my overlocker with the exception of the channels for inserting the elastic at the cuffs. The Fabric Store's merino is always lovely to work with and this was no exception. It moved through the machine smoothly, and the curved front yoke seam presses into shape easily giving a nice curved line. 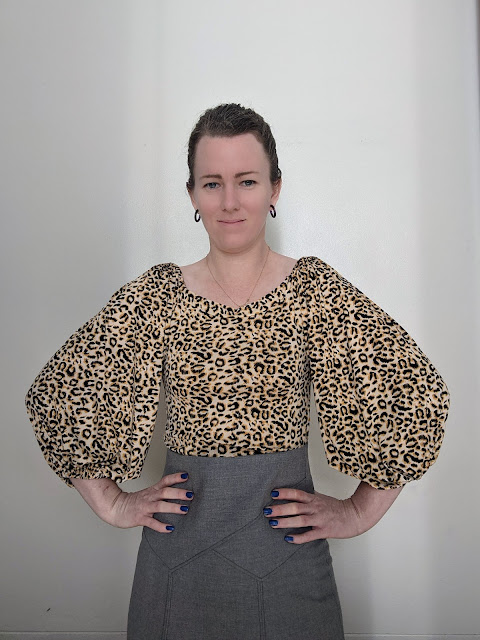 The second top is the Friday Pattern Company Adrienne Blouse. The fabric is a leopard print rayon jersey from Spotlight. As with the first I sewed it up almost entirely using my overlocker. However unlike the merino this fabric was not the most cooperative. It is a very soft and almost slinky fabric which makes it lovely to wear but also very slippy to work with. It was not always easy to get it to move neatly through the machine as it would slip to the left away from the blades. I had to hold the fabric at an angle to compensate for its movement. 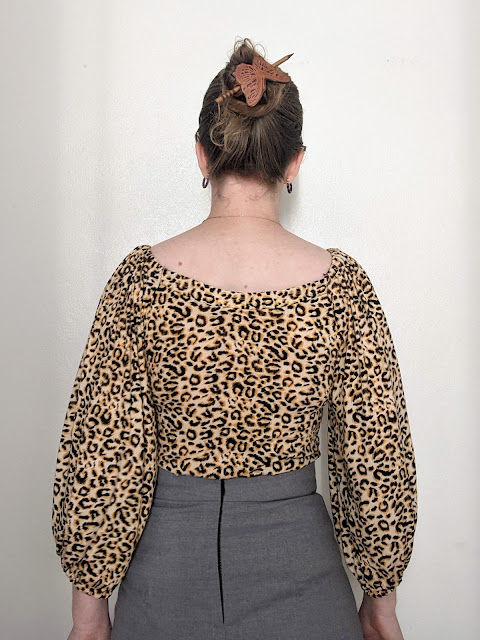 The pattern is a very quick and easy make, and probably would be quicker and easier with a slightly more structured fabric. The hem is a bit wonky because it wouldn't go neatly through the overlocker and didn't even out even with pressing so the twin stitched hem isn't quite straight to compensate. If I make it again I'll probably slightly shorten the front neckband so that it sits flatter against the body. But the top itself, with its elasticated cuffs and shoulders, is a beautiful shape.

Overall, I'm very happy with all three of these garments. They each have little imperfections but they've turned out really well. 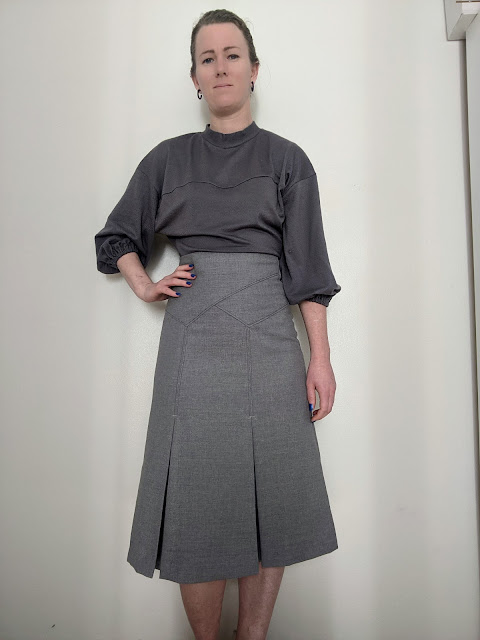 Posted by Antipodean Stitcher at 05:41