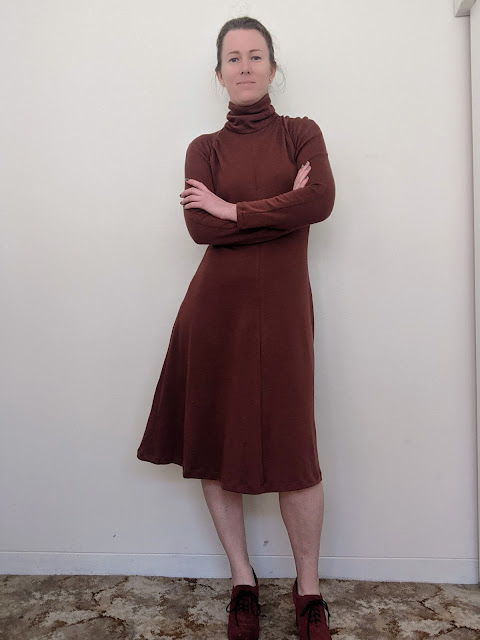 It's cold in locked down Sydney, and my flat is very chilly. So I've been making warm clothes to have something comfortable to wear and also have something to do while stuck inside. This turtleneck dress in merino from The Fabric Store is a great addition to my winter wardrobe.

A few weeks ago I came across the #whole30fabricchallenge, a challenge to try and use 30 yards (27.4 metres) before buying any new fabric. I have a lot in my stash, and given we are in lockdown due to Covid I have a lot of time to fill, so I'm going to try and give it a go. I'm not sure I'll get all the way through, and I don't think I'll do the rule of starting again if I buy new fabric, but I will get as far as I can. At least until my fabric stash is able to fit in the drawers it's meant to be stored in. With this dress I'm two metres into the challenge. 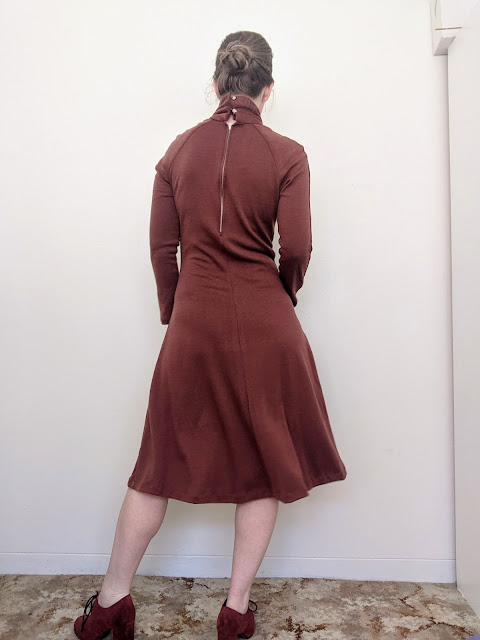 The pattern is a vintage Simplicity from 1974, Simplicity 5965 and is described as "designer fashion" although it doesn't say which designer. The pattern can be knee length or floor length for a fancier look. I don't tend to wear floor length gowns, so made the knee length version. My version is actually slightly shorter than the pattern's short version because I only had two metres of fabric and the pattern needed 2.15 metres. Where a lot of newer patterns have a lot of empty space on the cutting layout and can be squeezed into smaller pieces of fabric, this one did not have much spare space so I had to shorten the dress front and back pieces by about 5cm. But the pattern gives a generous 2 1/2 inches for the hem and I kept mine to 1.5cm so the finished length is about the same as the original pattern. 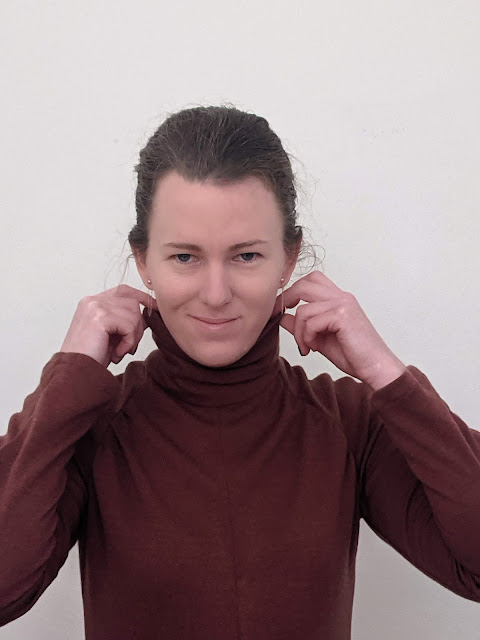 The fabric is a double faced merino from The Fabric Store in a deep rust. It is slightly more brown than I thought it was in the store, due to the lights in the back end of the store being slightly warmer than the clearer daylight closer to the windows at the front of the store. However this is a 1970s pattern, so the rust colour matches the era well. The fabric is double faced, so either side could have been the "right" side, but mostly it's thicker, warmer and has more stability. I chose to use the plainer side, as the other side had a very faint stripe which would have been hard to match well on this pattern, especially given fabric amount constraints. It likely wouldn't have been very noticeable, but I wanted to keep this dress looking simple to just have focus on the design lines. 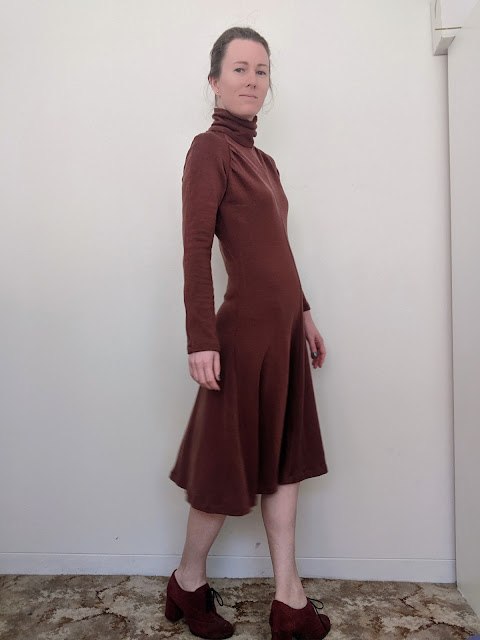 The construction of the dress was quite simple as there are only five pattern pieces: two each for the front and back, two piece sleeves, and the collar. The collar is just slightly loose, so it stays high but doesn't cling. I'm not a fan of tight turtlenecks and skivvies so was a bit worried about how this one would feel, but this is very comfortable. The dress front is gathered slightly along the shoulder seams which gives a small bit of detail and interest while still keeping the simplicity of the dress. There is also a pattern piece for stays to stabilise the gathers on the front where the raglan sleeves join, for which I used bias binding. This was a bit of a deviation from the pattern as it meant I didn't press the seams open, but it keeps everything neat and there is no visible stitching of joining the stays to the sleeves. 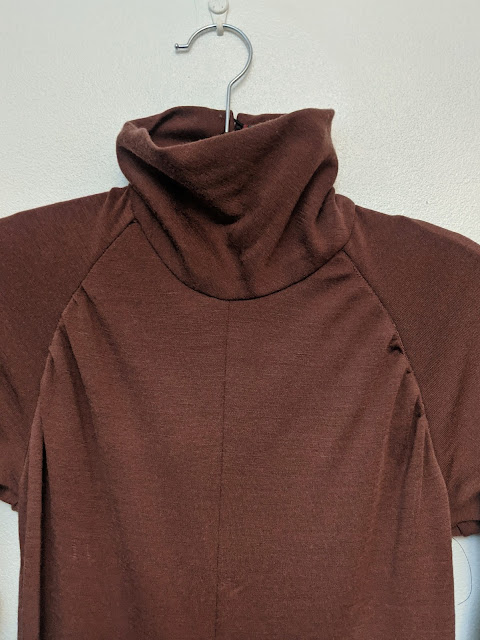 The pattern is a size 8, 31 1/2 inch bust and 24 inch waist and sits comfortably, with a neat fit but not clingy. The pattern has a centre front seam, which I often don't like but works well for this dress. Given it is a knit dress and relatively fitted to the waist, the centre front seam allows for some subtle shaping that wouldn't be possible if it was one piece cut on the fold. The dress would still work either way, but the centre front seam just makes it sit better and look that little bit fancier. 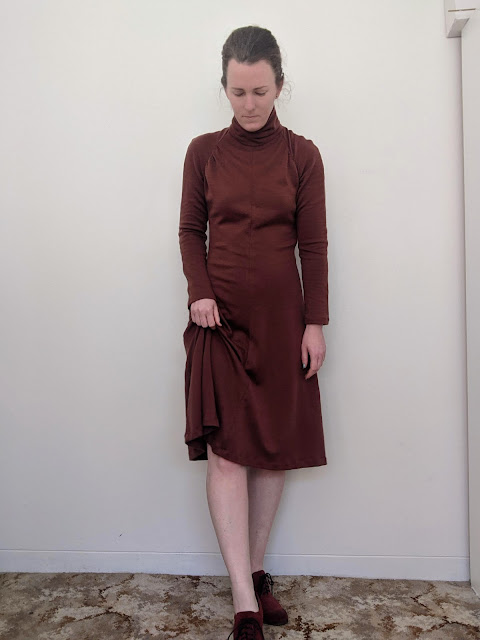 The dress closes with a zipper down the back and buttons for the collar. I was unsure exactly what buttons I wanted for this dress, whether I wanted something to closely match the fabric or have a contrast. I also needed to have at least three buttons for the neck to sit right (the pattern actually recommends 5 buttons) so I went through my button tins and pulled out a whole lot of different options and laid them on the dress to see which I liked best. I chose these vintage pearl buttons out of a tin I inherited from my grandma. They are simple buttons, but the cream colour both complements and stands out from the fabric in a way that works really well. The pattern suggested creating fabric loops for the buttons but the small size of these buttons made that difficult, so instead I've used black hat elastic. 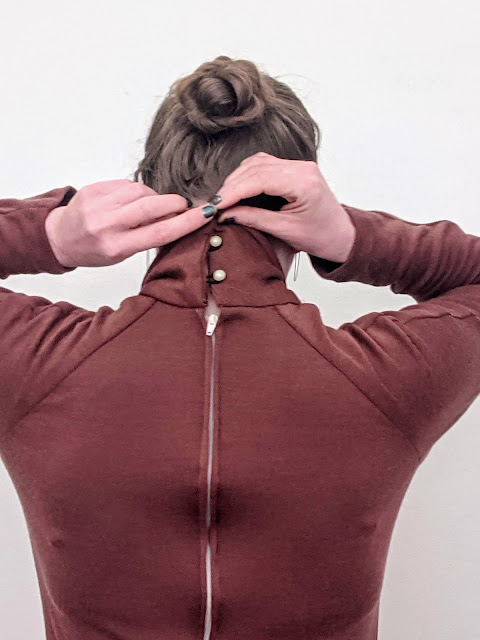 The only thing I'm not entirely happy with is the zipper. I have a large collection of zippers, but didn't have any in shades of brown, deep red or dark tan which would have blended in to the fabric. Given Sydney is currently in a hard lockdown I can't go to a fabric or quilting shop to find a better zipper, and it's not worth ordering a single zipper as shipping would cost at least three times the price of a zipper. I looked through what I had to see which zipper might work and decided on this beige as it's neutral, but it isn't the best zipper installation so it shows more than I would like. I might try and see if I can press the fabric better to lie flatter against the zipper, or if it still annoys me when I'm able to go looking again I might replace the zipper with one in a better matching colour. 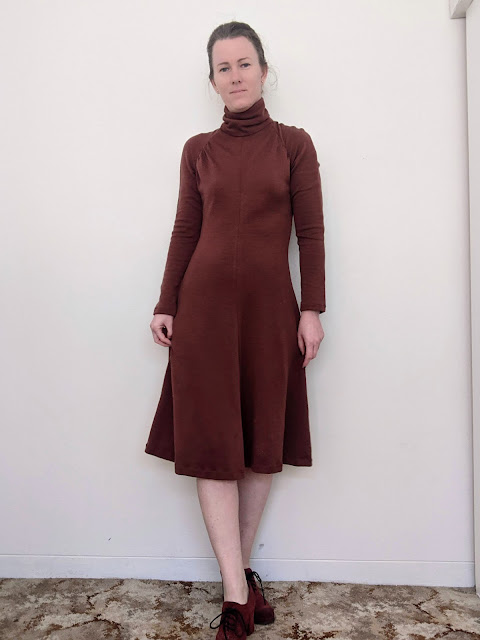 I'm very happy with how this dress turned out. It's comfortable, warm and has just a little bit of elegance. I'm certain it will get a lot of wear.

Posted by Antipodean Stitcher at 03:23