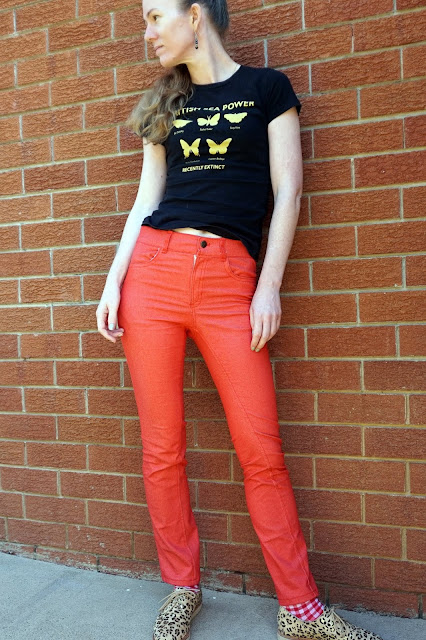 I made jeans!And they're colourful and they fit and they look reasonably professional. And they're jeans that I made! It's definitely an exciting achievement. Exciting enough to jump for joy. 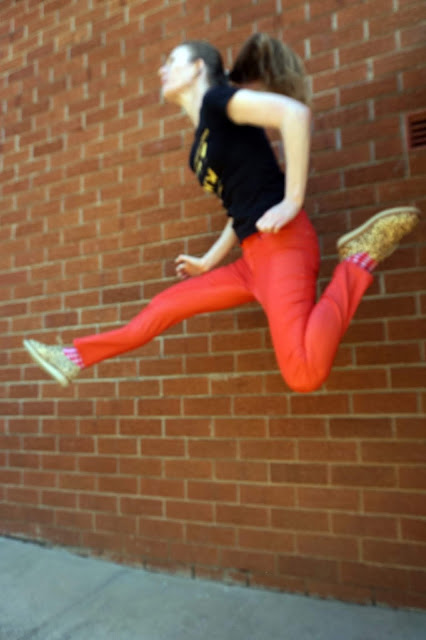 These are the Ginger Jeans from Closet Case Patterns. I cut out the size 2 although I should be a size 0 - I measured the test square and discovered that it had printed slightly under scale. I've never had that happen before with a digital pattern before so I'm not sure what went wrong, but fortunately it was as easily solved as cutting out the next size up. I'd also printed the low rise version but decided I wanted them high waisted. Instead of printing out the high waisted version - or even just the pages for the waist - I simply sketched the seams for size 2 up to the top of the size 20. 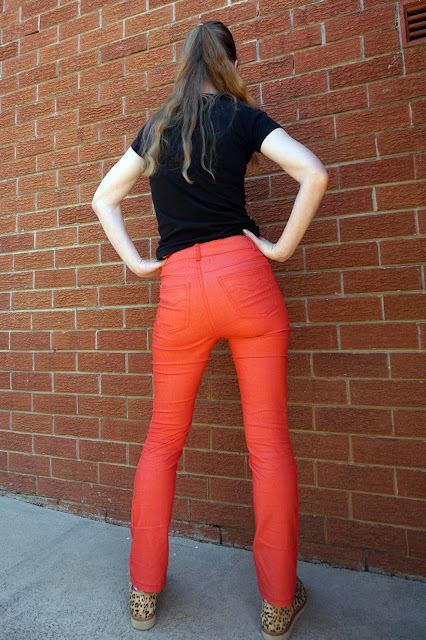 I've been planning to make jeans for a while. I had planned to make some last year and bought the pattern and a different piece of denim, but it was more expensive and I was too daunted to use it. So instead I bought this cheaper denim. The fabric is a very stretchy and lightweight denim from My Hung fabrics. It came in both this watermelon red and a rich aqua, but I decided I liked the watermelon shade best. 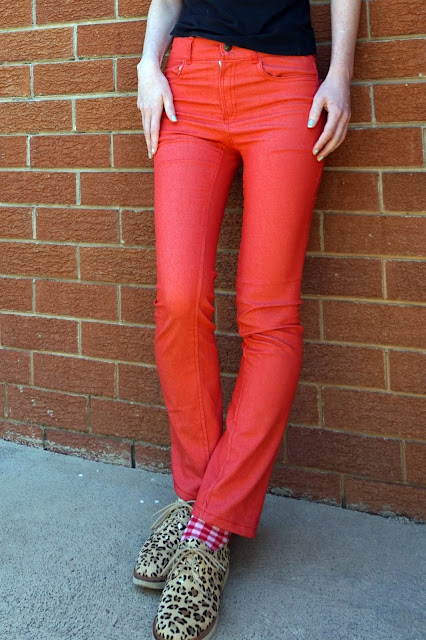 The pattern recommended basting the pieces together first and trying them on just to check for any major fit issues. I normally don't bother with any of those precautionary steps - I've never made a muslin in my life - but I decided this time I would be good and follow every step. I tried them on and the fit was great. Even my sketching the waist from low rise to high rise had worked well! 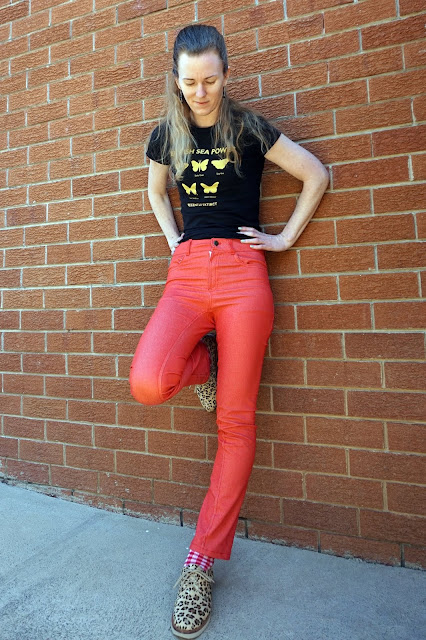 The pattern is generally well written with clear instructions and accompanying pictures. However, I did have issues with the fly. Because I tend to find the fly tricky to do, I made sure I read through the instructions and look at the pictures before sewing and also made sure each step that I followed exactly. However, when I undid the basting stitches it wasn't centred. So I unstitched the lefthand side of the zipper, repinned it further in and stitched it back in so it sat flat and straight. 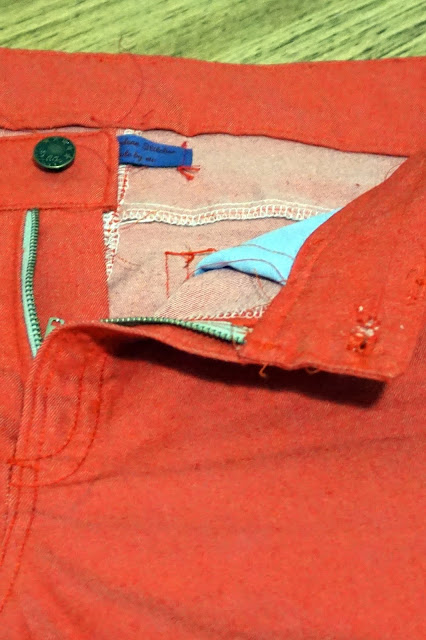 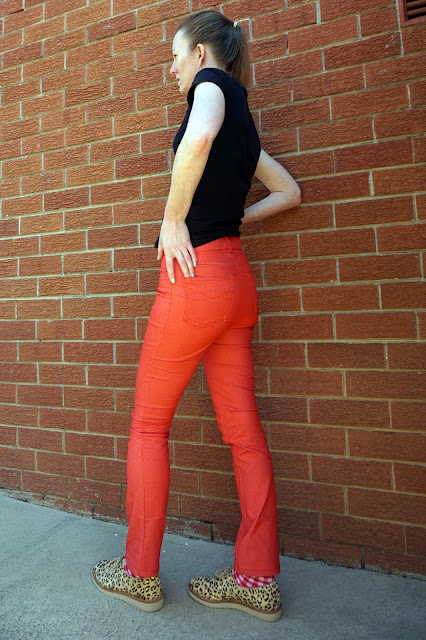 I used a red topstitching thread because I haven't really used it before and didn't want it to show up too much in case it was wonky and uneven. I decided I wanted wavy lines for the back pocket topstitching which I marked on with tailor's chalk and then very carefully tried to follow my lines. They aren't perfect, and my other topstitching definitely isn't even straight lines, but it's probably better than I thought it would be. 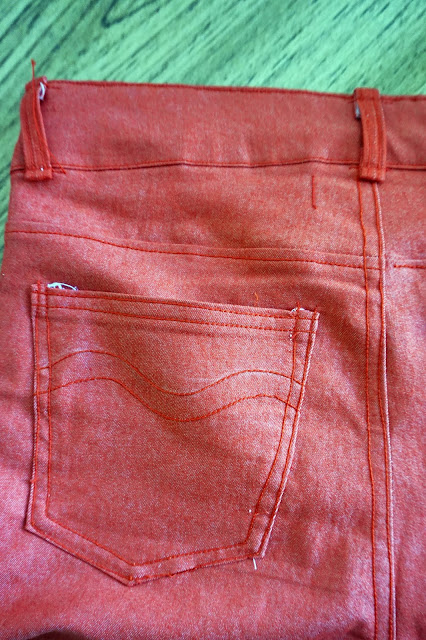 The pattern is for skinny jeans, but they don't taper in right at the bottom but are instead straight from the calf. This is the only thing I dislike about the pattern itself, and if I use it again I will definitely change it so that they are skinny all the way down. However, this is only a minor issue. 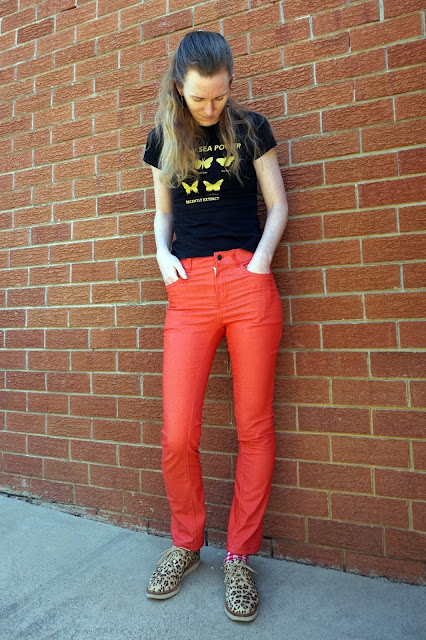 I also would make the waistband piece smaller and more tapered. The pattern says the piece is slightly longer so that it can be trimmed and adjusted to each person's waist size, and while I did trim it shorter I found that after I'd ironed my interfacing on it stretched it slightly out of shape. Ironing the waistband after it was inserted helped even the slight waviness a bit, but next time I'll make the waistband a bit too small so that it can stretch after insertion. 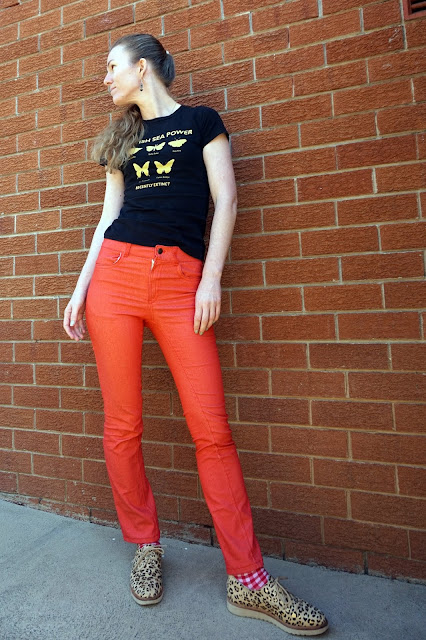 Anyway I am very proud of myself making jeans. It was daunting and definitely more involved than most sewing but surprisingly not hugely difficult. And I'm really happy with the fit and how they turned out. I'm even tempted to go and buy the aqua denim and make a matching pair. Akthough maybe not right away.

Posted by Antipodean Stitcher at 13:05