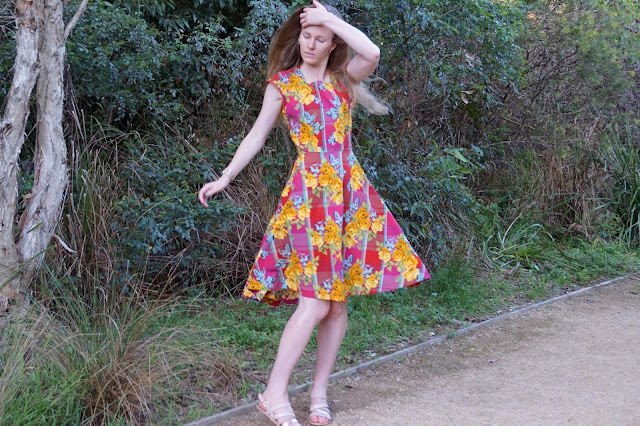 A dress in this fabric has been a long time coming for me. It's Liberty of London Madras Check Hyderabad E. I've taken the bolt out at The Fabric Store probably every time I've been in there in the last two years but always put it back because the pink is very pink and the roses are very yellow, so I worried that the fabric might be a bit overwhelming. But restrained colours and prints just aren't me. So when the Fabric Store had one of their one-day sales last month I finally bought 1.5 metres ot make a dress. 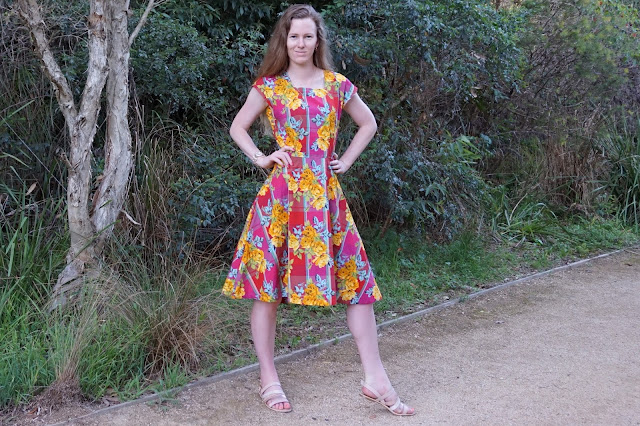 The name of the dress comes from my work. Each year at my work we have a christmas/end of year decorations competition on our floor. This year there was a theme, one person's trash is another person's treasure. Our branch made a beach-themed diorama, complete with offcuts of the roses on this fabric as garden and repurposed sign edited from making it happen to making summer happen. I wore the dress - and we won! 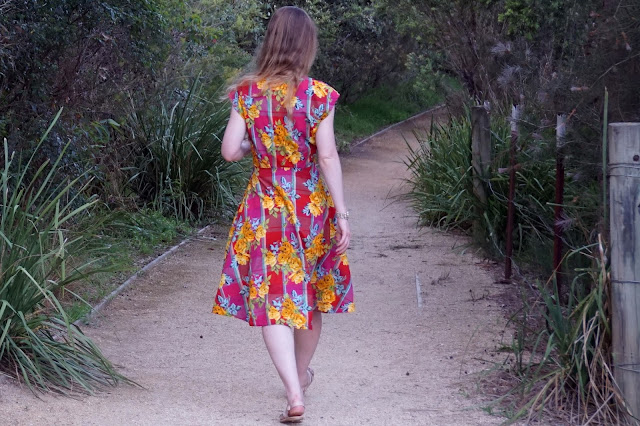 The pattern is Weigel's 1358. Madame Weigel was an Australian pattern maker from the late 19th Centure to the mid 20th Century, most of that time run by Madame Weigel herself. I'm not 100% sure when this pattern is from, but based on the cut of the dress and the styling of the pattern envelope I'd guess it's from the mid 1950s. 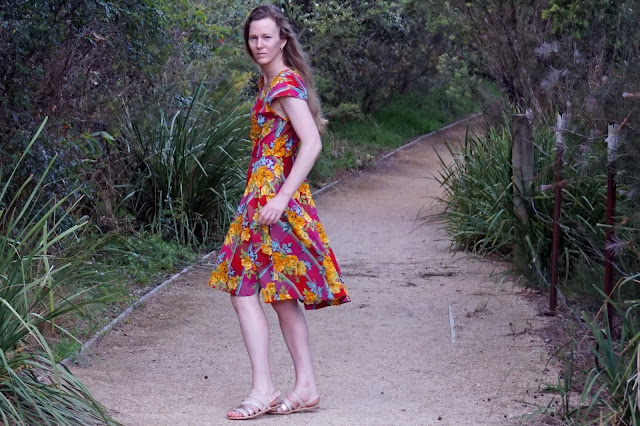 The dress was very easy to make, but the instructions are very brief, just two short columns on an A4 piece of paper and one diagram of the cutting layout. I've noticed this on some older patterns - there was a clear understanding that women learned how to sew and didn't need much in the way of specifics of how to make a dart or insert a zipper. 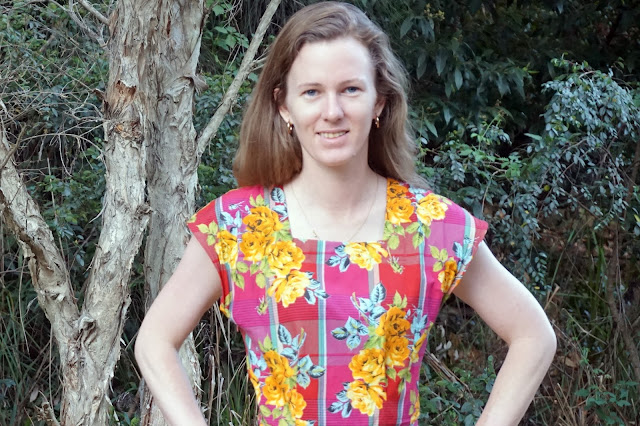 I made a three changes to the pattern when making this, all to the skirt. The skirt is meant to be cut all in one piece with only one side seam. But the fabric is a check, and the lines would have sat at a strange angle along the centre front cut that way, so instead I cut two skirt pieces on the grain. I also raised the hem and gave it a slight high-low shape, ending just above the knee at the front and at the bottom of the knee at the back, and added pockets. 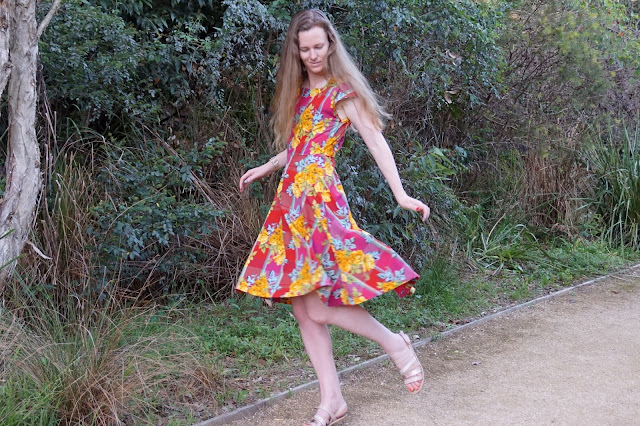 The only slight annoyance I have is that I cut the bodice slightly off centre. I was very careful when placing the skirt piece on the fabric to  make sure the centre front was in the middle of the check, but I didn't take the same care on the bodice, so the blue stripes are just a bit mismatched. 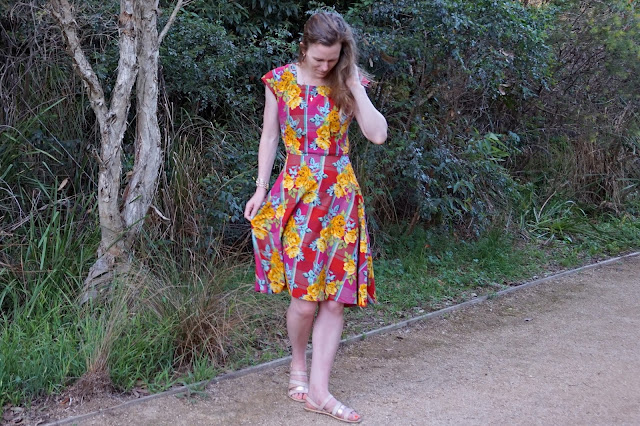 I love how this dress - or this "chic little model" as the instructions describe it - looks. The square neckline is a nice difference, and having a side zipper instead of a back zipper gives it a cleaner look. It has very simple darts in the front and back, extending up slightly over an inch from the waist. The very minimal sewing still allows the dress to fit well but also have a lot of ease of movement. 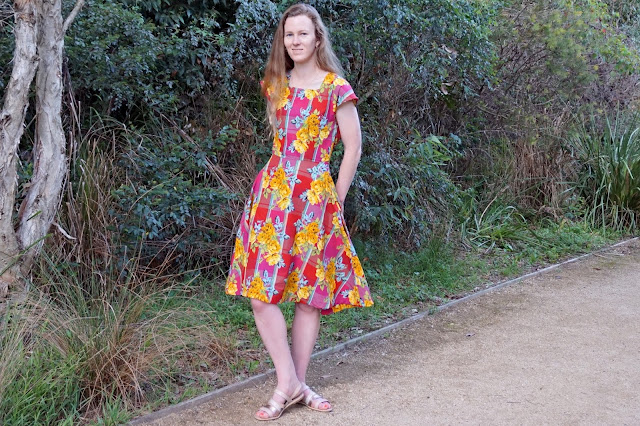 It's a very simple and versatile pattern, so I can see myself making many versions and variations on it. But for now I'll enjoy the bright pinks and yellows of this one. 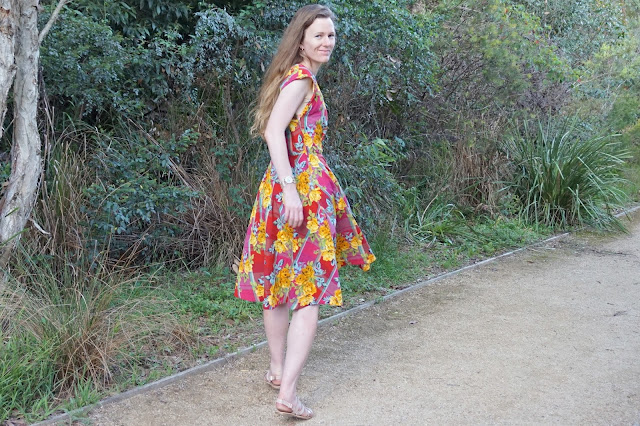 Posted by Antipodean Stitcher at 02:50