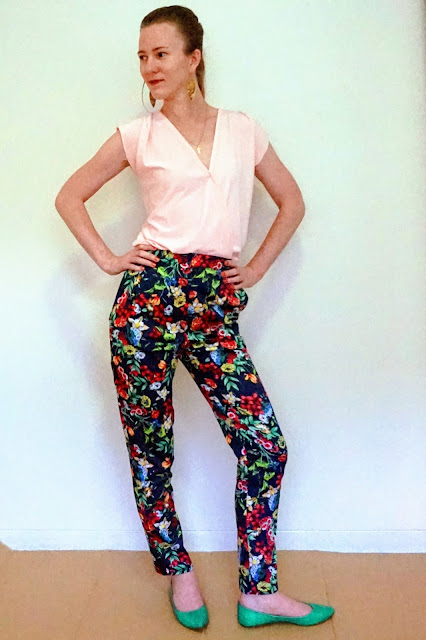 I've been meaning to learn how to sew pants. I have tried a few times, but it's always daunting and I'm never as happy with how they turn out as with my other makes. But I wanted some new pants to wear to work, so I decided it was time for my next attempt at them. I own a few pants patterns and am planning to work my way up through them by difficulty level. Fitted side zip pants seemd like the easiest place to start. 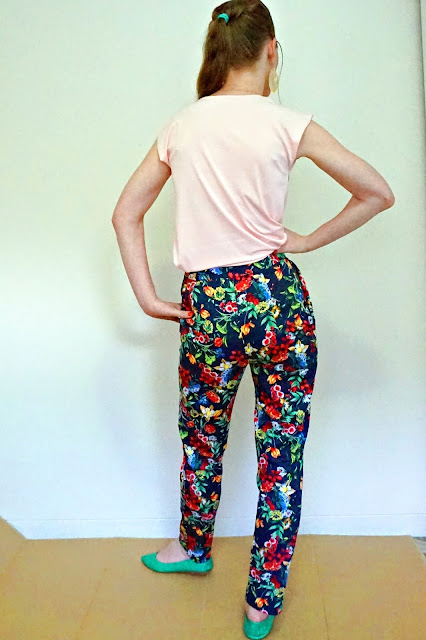 The pattern is Vintage Vogue V9189, a high waisted pattern with two shorts lengths and two pants lengths originally from 1960. The amazing floral fabric is a cotton sateen with a bit of stretch from My Hung in Hurstville. I've seen a few floral pants around lately, and given it is almost summer here I thought bright floral would be the best choice. Plus, being a plain slim-fitting pattern these pants can handle a print better than a more traditional trouser. 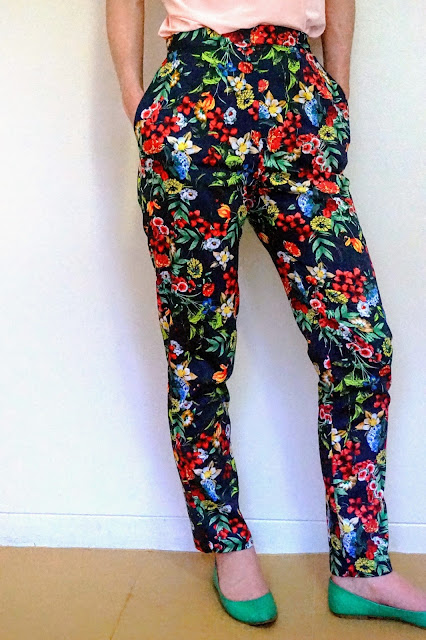 One of the really good things about this pattern is that it comes with three different lengths: short, medium and long. Given one of the problems I've had making pants before was where the curve of the hip sat on the pattern compared to where it is on my body, it was good to know when I opened the pattern up that I'd be able to use the different lengths to make those adjustments before cutting out if I needed to. In the end I made the medium without any adjustments, but for others who are taller or shorter, or who have different leg and waist lengths, this pattern effectively does those adjustments for you. 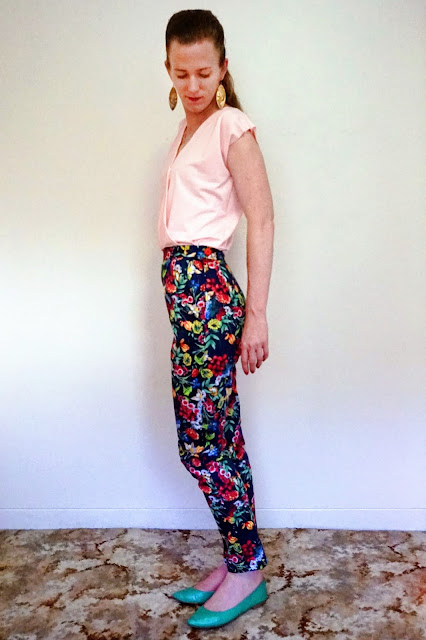 These are definitely the best fitting pants I've made, but that was partly by accident. I'd almost finished sewing them up - except for the waistband and hemming - so tried them on. With other pants I've made they have often been a bit loose at the crotch and inner thighs, and these were as well. Given the slim fit of the pattern it really stood out, so I decided I would sew the seam in closer. I had intended to evenly take in 1cm and see how it looked, but when sewing the crotch curve the pants back pulled a bit and I ended up sewing it in 2cm. I noticed because the seam was not straight just after I'd sewn across the centre of the crotch so I stopped stitching. 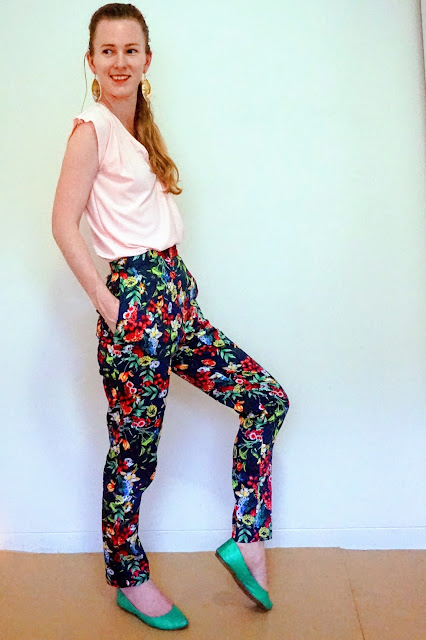 I was going to immediately grab my seam ripper and unpick it all, but thought I'd first try them on to check if I'd at least dealt with the loose thigh issue. When I put them on not only did the leg fit better but the crotch on the side I'd taken in was also fixed, which was great. Of course, that meant I somehow had to recreate my accidental fix on the other side. Because I'd started sewing from the thigh for my accidentally correct adjustment, I decided to do the same for the other leg. I also marked where I'd become uneven between the front and back, and very carefully sewed it, using my fingers to adjust the back until I reached where I'd initially stopped. 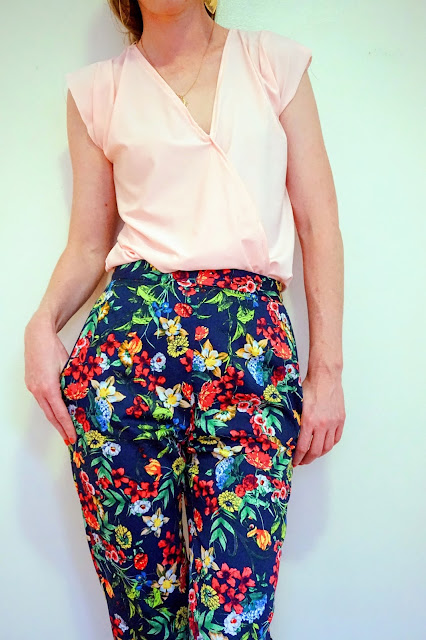 There are slanted side pockets which are angled very close to the side seam making them slightly hidden. The pockets are understitched to try and stop them from turning out, but for some reason the righthand pocket facing doesn't always stay down. The side zipper was nice and easy to put in, just like a skirt's. The waistband also went in well - I have had patterns in the past where the waistband piece was too short or too long, but this one was just right. 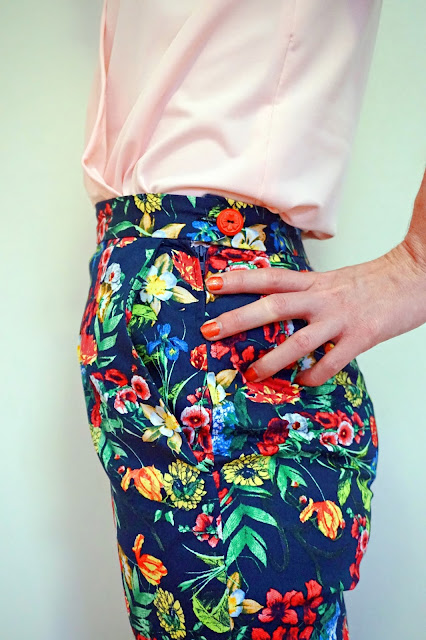 As a finishing touch, the button is from my tin of vintage buttons I inherited from my grandma. I like that it's vintage, so fits with the era and style of the pants, the colour matches perfectly, and it's nice to have that connection to my grandma, who sewed a lot herself. 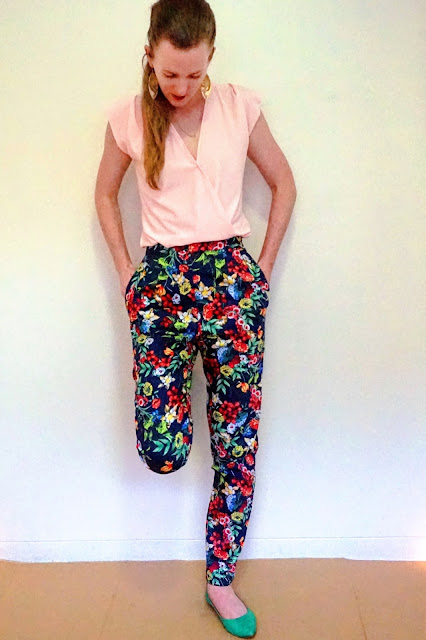 I am really proud of how these pants turned out. The fabric and the fit are just right, and they are just fun to wear. They've improved my confidence in making pants, and I plan keep working my way through the other patterns I own increasing the difficulty, including doing fly finishes. In the meantime, I'll be wearing these as much as I can. 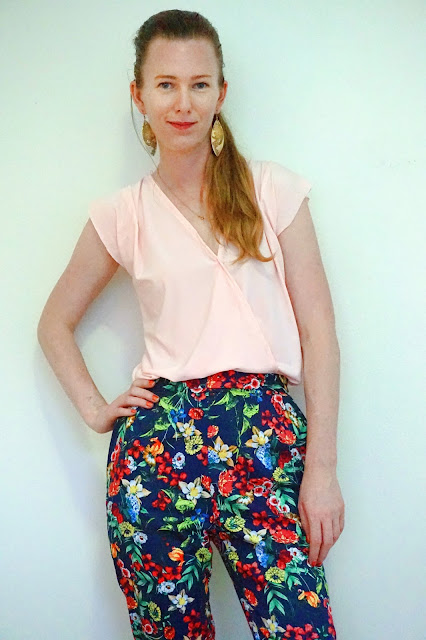 Posted by Antipodean Stitcher at 00:07