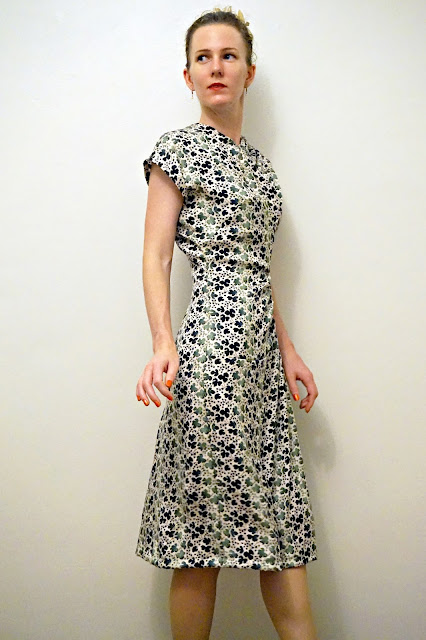 So the Sydney Spoolettes finally got around to holding a frocktails event last Saturday. Melbourne, Brisbane and Canberra sewists have been much better organised than us Sydney sewists and have each held a few big events before, but it had only been talked about in Sydney. But thanks to the excellent organisational skills of Caz from Useful Box, Sydney has joined the party. 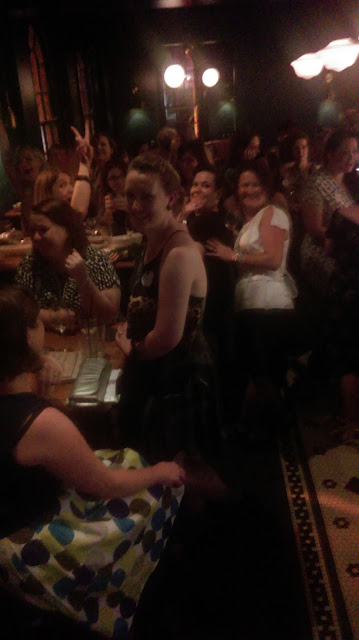 Frocktails is where you wear something you've made, book out a nice venue and get together with a bunch of other sewists to have some drinks, chat, and feel each others' fabric. It's a lot of fun, as you get to see all the different styles people wear, see patterns you've heard about made up into a finished product and talk about fabrics and sewing techniques without boring people out of their minds. 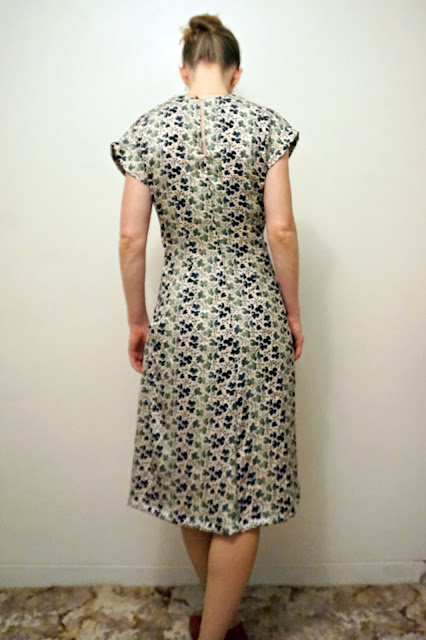 It's also a good excuse to make a pattern that isn't an every day style. Or, in my case, finally finish one off. This dress is by far the longest make from when I bought the pattern and fabric to when I tied off the last thread. In fact, I'd be surprised if there were many people who had a finished make that had taken as long as this one did! 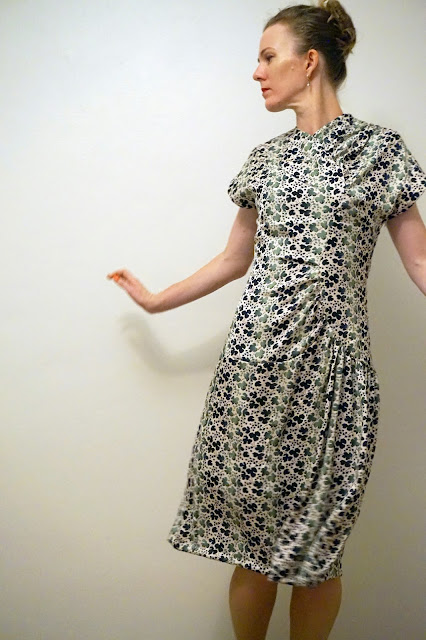 This pattern is the out-of-print Vintage Vogue V2787, originally from 1948. It's an absolutely stunning pattern, with curved and gathered bodice seams, gathered shoulders and a curved and half gathered front skirt piece. I bought the pattern and fabric from Tessuti back in 2005 when they still had a store on York St in Sydney. The fabric is a silk twill called falling leaves or falling ivy (it's been over a decade, I'm not certain of its name) and is wonderfully soft with a great hand. I got the pattern home, pinned it and cut it out, and then realised I'd had a bit of a delusion of talent and definitely didn't have the sewing experience to make something as complex as this. So I put it back in its Tessuti bag and put it away for a decade. 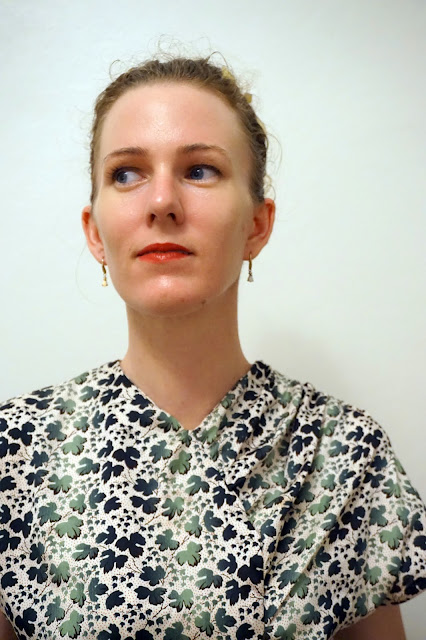 I pulled it back out two years ago during the sewphotohop daily photo challenge on Instagram. One of the prompts was 'secret corner of shame', and an unfinished ten year old pattern was an obvious choice. I got a few comments telling me to have a go at sewing it up, so I took it out of its bag. I hand gathered along the seams, hand basting before stitching it together. The fabric has about 4% elastane giving it a slight stretch, but it sews together completely smoothly. 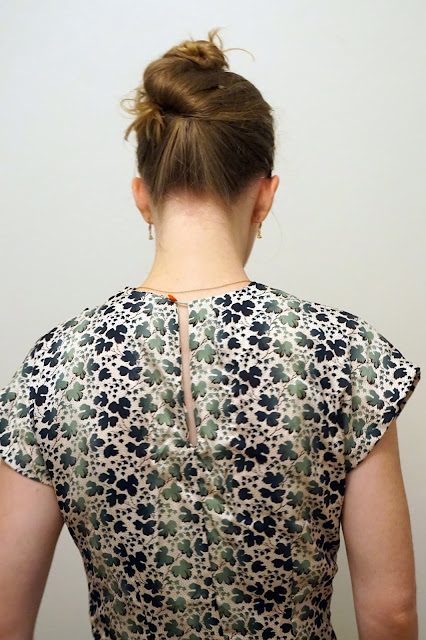 The dress has a side zip and button back. The button I used is from a box of vintage buttons I inherited from my grandma. I did all the seams by machine, but decided that the zipper, hem and sleeve caps needed to be sewn by hand. However I didn't finish the dress off then, I pinned the zipper in and moved on to other projects that were quicker and that I had a reason to sew. 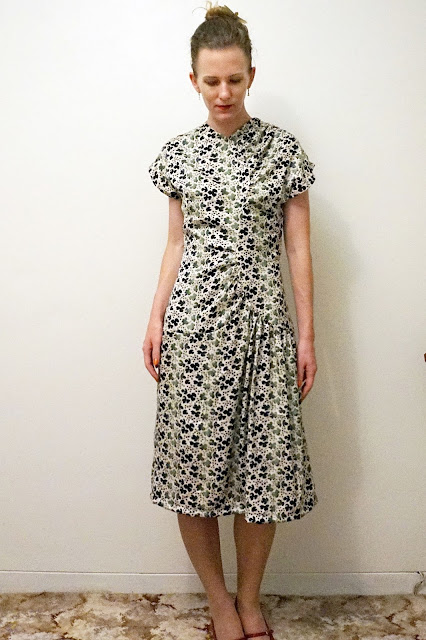 Fast forward another year and a half to the start of this year, and I was starting to think about what I should wear to frocktails. I looked through what other fabrics and patterns I had but nothing grabbed me, so I thought I might pull this one out again and finally finish it off. But there were a few other things I wanted to do first (see my last few posts) so I didn't actually sit down to start finishing it off until about a week before the event. And not only did I have a long week at work, I was close to out of the bone coloured thread I was using. Nothing like a deadline. 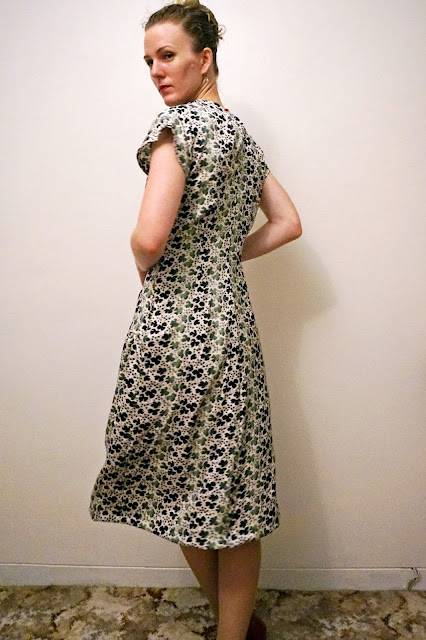 The hand sewing was straightforward, just tedious. I decided to hand sew the last elements so that the hem, side and sleeve caps would look smooth with no stitch lines. That meant it took time and close attention to make the stitches as invisible as possible. I finally tied off the ends of the hem threat at 6:05pm on Saturday, barely half an hour before leaving to head into the city for frocktails. I gave the dress a quick press - missing a crease on the front of the skirt - got ready, and headed off to see all the Sydney Spoolettes. 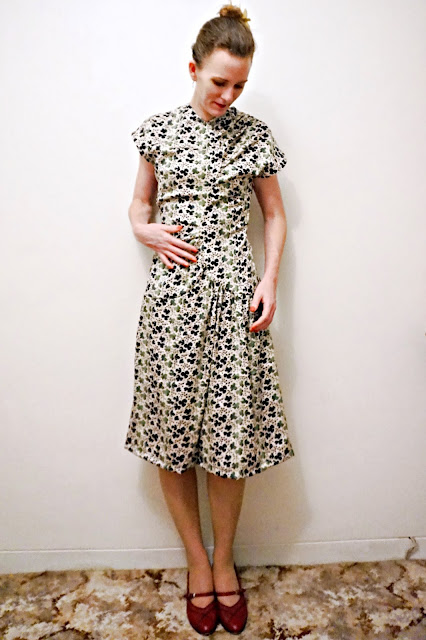 Sadly I didn't get many photos at frocktails as I only had my phone and the venue was relatively dim, but it was a fantastic night. There were 70 women all in amazing outfits they'd made, great drinks and lots of food. It's taken a long time, but it was great to finally get so much of Sydney's sewing community together into the one room. Here's hoping we'll have more frocktails events in the future!


Posted by Antipodean Stitcher at 04:41