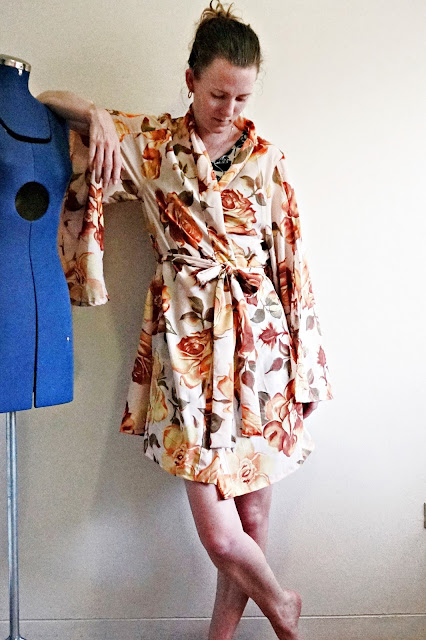 It is hot.
This summer in Sydney (and a lot of Australia) has been ridiculous. We've had a record-equalling nine days over 35C - that's 95F for Americans - so far this summer and there's still almost a month left to go. It's too hot to do much sewing, or to wear too much. So light sleepwear is a must. 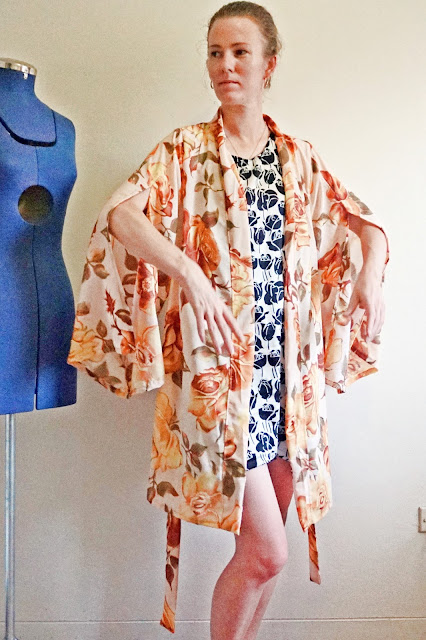 These two items are some of the few things I've made over the summer. Most of my old sleepwear is very much old and starting to fall apart. I also didn't have a summer robe for lazing at home during the holidays or on weekends when I don't feel like getting dressed just yet. So here are my Asaka Kimono and loose drape tank top nightie. 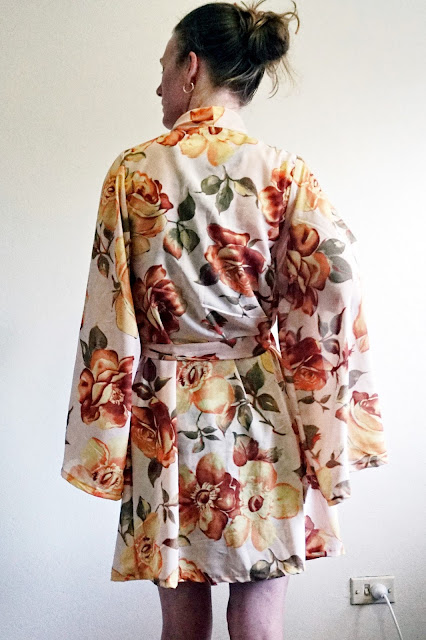 First up is the Asaka Kimono from Named Clothing. Named are a Finnish indie pattern brand who I know a lot of sewists have tried, but this was my first make. I actually bought the pattern during their pre-Christmas sale in 2015 (I bought 2 other patterns then too) but I only recently got around to making it. 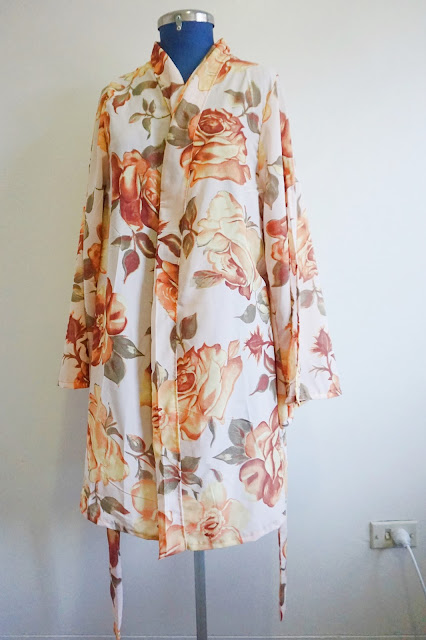 The pattern is pretty straightforward without too many pieces. It does require a lot of fabric - and it isn't one where you can just lay the pieces like a jigsaw to save room. But none of the pieces are strange shapes, nor are there any awkward joins that need to be made. This pattern would be suitable for even fairly beginner sewists. 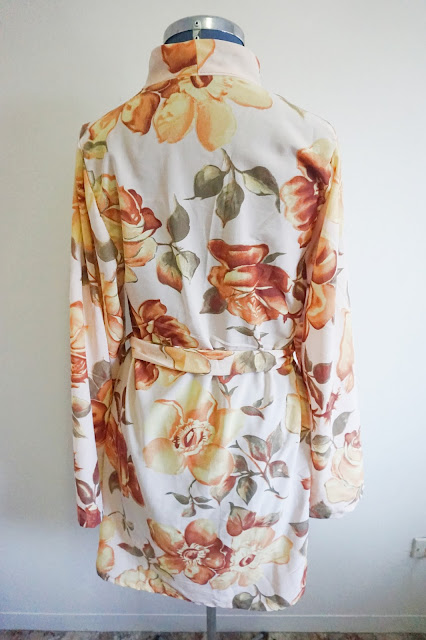 Because the fabric frays and isn't the greatest quality (although the print was too perfect a match for the pattern not to buy) I again did French seams. Of course I couldn't do French seams for the sleeves due to the vent, so instead I sewed those with a wider seam allowance and then rolled that under and topstitched it down. 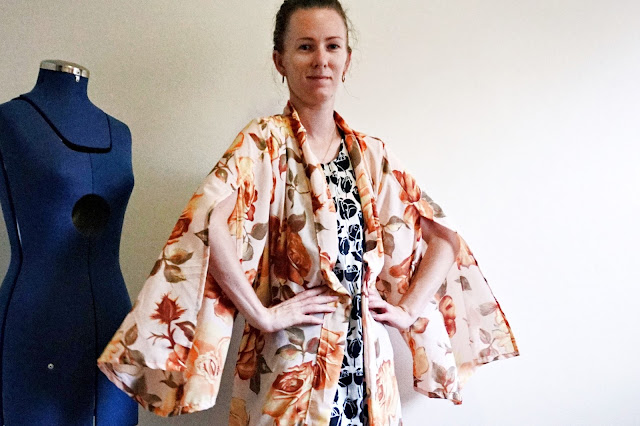 I do think the tie belt is possibly a bit too long, which is my only complaint. Mine almost reaches the floor when untied, and that's after I managed to burn holes in one end and had to cut it shorter. Turns out the cheap $2 a metre fabric I bought at Spotlight is not friends with the iron, so this gown is just going to have to remain creased. 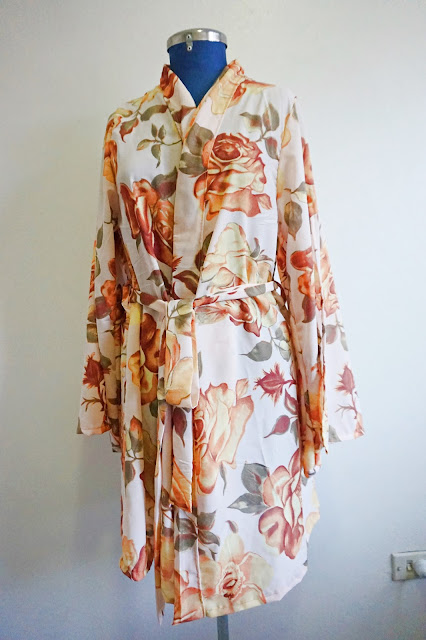 The nightie is the No. 13 Loose Drape Tank Top from Drape Drape. This pattern I have changed when I made it. The first and obvious change is in the fabric I used. As with most in the book, the pattern is designed for a knit fabric. However I'd bought metres of this black and white Deco-esque rose satin a few years back planning to make sleepwear. Seeing as I already had the fabric, I decided I might as well use it as I'd planned to. 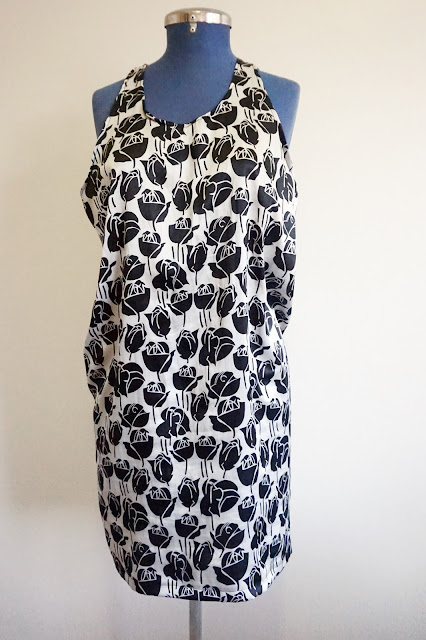 The second change I made was to the pattern itself. The original in the book is much more draped at the side, down to the waist in the pictures in the book. I didn't want it to be that deep, so when I traced the pattern out I overlapped the two pattern pieces to narrow and raise it. The sides are still deep, but not so much that the nightie is about to fall off. 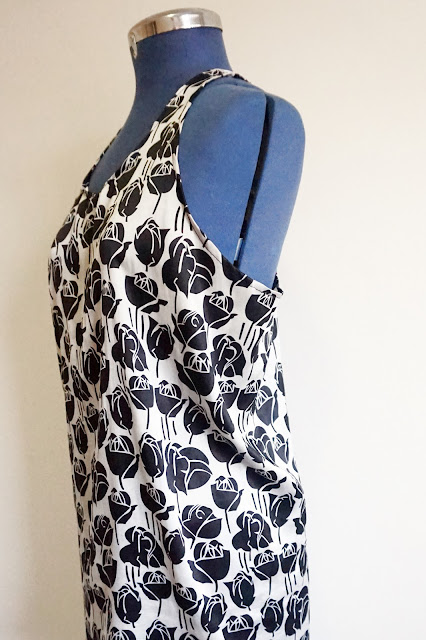 I didn't make any other modifications to this pattern, and like my Punto Drape Dress the pattern was incredibly easy to follow. It is made all in one piece, cut out on the fold and sewn up at the back, so it is very quick. It definitely taes twice as long to trace and cut the pattern out as it does to make it. It's a great pattern, and works in a woven just as well as it would in a knt. Again, recommended for sewists of all skill levels. 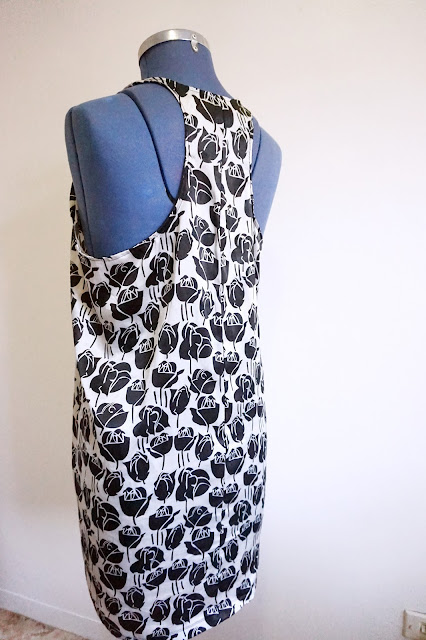 We've had a bit of a cool change come through this evening and tomorrow is going to be wet and a cool(!) 25 degrees, but the weekend is hotting up again, possibly to 40 (104F) on Sunday. So these lightweight sleepwear and lounging gown are going to come in handy for a few more weeks yet.
Posted by Antipodean Stitcher at 05:10