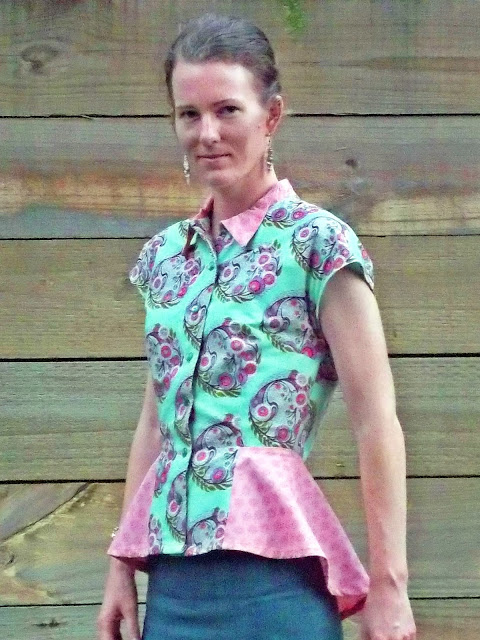 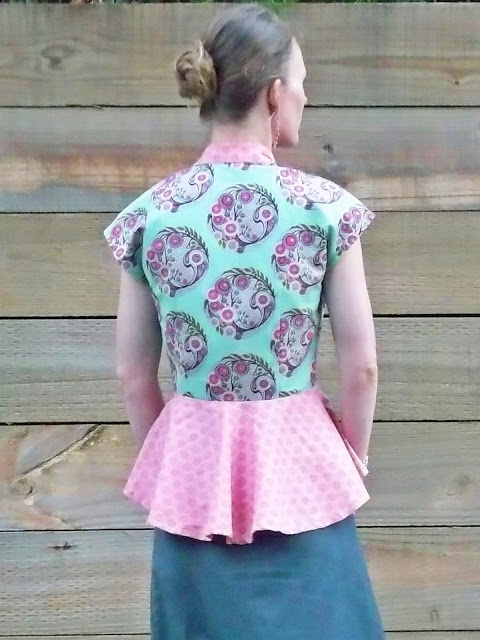 I've actually had both fabrics for almost five years but couldn't find what I wanted to make with them. I'd thought of using them together, but was a bit in two minds about it, and didn't have any patterns that really felt like they were right for either fabric. But when Spotlight had a pattern sale a few months ago I managed to snap up a few reproduction vintage patterns, including this one. Although the original pattern doesn't call for two contrasting fabrics, when I was going through my stash to find something to make the blouse with, it was clear that yes, the fabrics do work together, and this was the pattern that would make that happen. 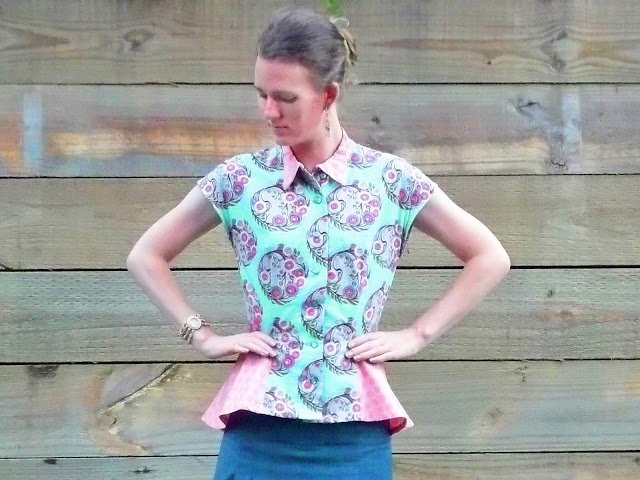 This blouse is another addition to my work-appropriate clothing needs. The pattern is Simplicity 1590, which is labelled as a "Misses' 1940s Retro Blouse". There are two variations, this high necked option or a scoop neckline. Because I wanted to use the contrasting fabric I decided to make the high necked version so I could make a contrast collar. But I did leave off the waist ties and neck bow, deciding they were probably a bit much on an already very girly blouse. 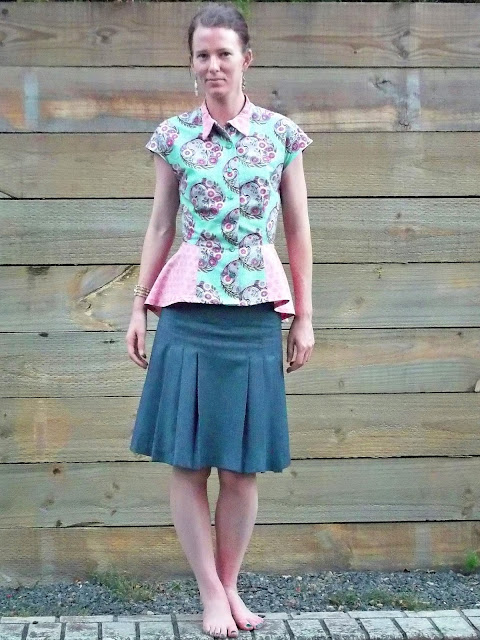 I'd forgotten how high the necklines tend to be on 1940s patterns! I've made a few in the past and generally lowered the neck a bit at the front so it didn't feel tight, but I forgot to do that with this pattern. So because it is slightly uncomfortable done up, I decided to leave the top button undone. Also the way the collar is made it won't sit properly if I have the top button done up even though I'm sure I followed the pattern correctly, so I'll just leave it undone when I wear it. It kind of makes it a bit more modern and less costumey, too, to wear it not done up to the top. 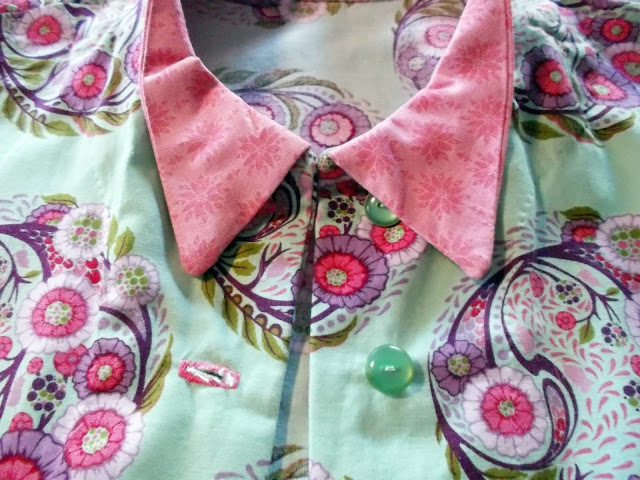 When it came time to choose buttons for this blouse, I wasn't really sure where to start. There's a lot of colour in the two fabrics, so trying to find something that matched was a clear possibility. But then I had to work out what colour to match. I decided not to try and match one of the secondary colours in the main fabric's flower circles because I thought adding anything extra to the two already dominant colours might be a bit much. Pink buttons was my next thought, so that they'd join the collar and peplum as a contrast. But when I went through my tin of vintage buttons I inherited from my grandma I found these green ones. The colour isn't a perfect match but works tonally, and there were the exact number of them that I needed. I did do the buttonholes in pink thread to keep the contrasting going. 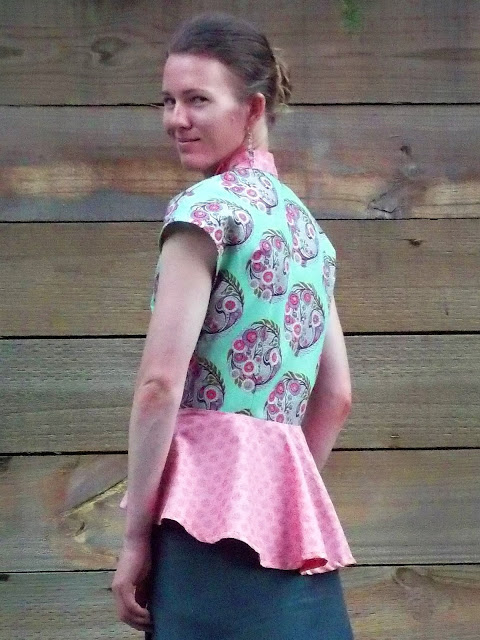 I'm mostly happy with this blouse. I've alreay mentioned the very high neckline which I can't button all the way up and have it comfortable and have the collar sit right. I also should have slimmed in the front bodice from the waist to the underarms. I don't do it for every pattern, but the way 1940s patterns emphasise the shoulders means they can be a little baggy on me around the bust. I could always go the whole way down the 1940s path and add shoulder pads to give the blouse a lift, but I think it's fine without it. Pattern placement for the main fabric was another issue I was conscious of, and I don't know that I got the best result, but I did manage to avoid anything inappropriate. But weirdly the thing I'm least happy with is the back seam for the peplum. It tickles me whenever it moves, which is going to take some getting used to. 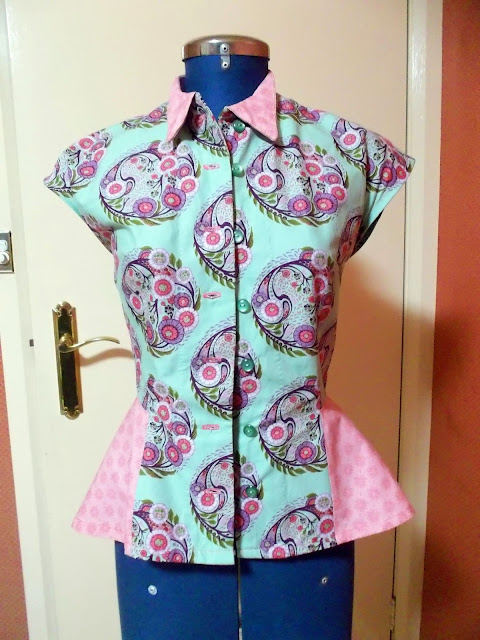 But still, it's a lovely pattern, and gloriously girly fabrics. And it's nice to have used some fabrics that have been in my stash long enough they could be starting school this year! This is also my first vintage pledge make for 2016. I'm aiming for at least eight, so we'll see how I go. 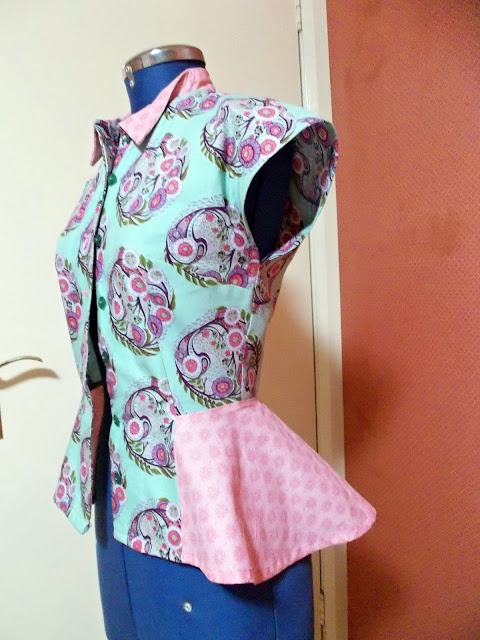 Posted by Antipodean Stitcher at 04:10