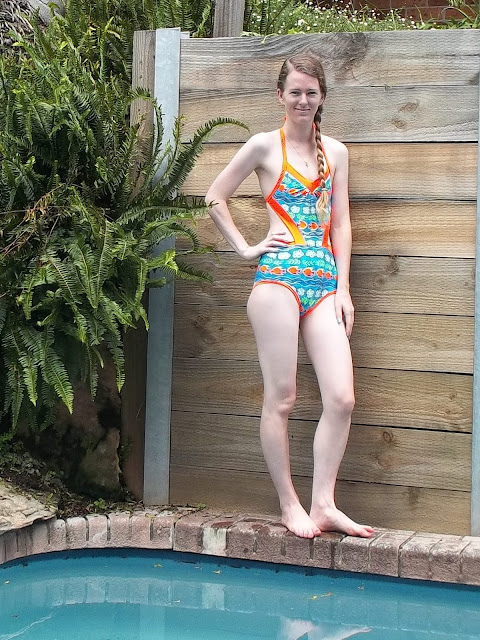 Yay I made a new swimsuit! This is the Splash Swimsuit by Lily Sage & Co. It comes in both one piece and bikini. She released it last Northern Summer, so I'd been waiting for it to warm up before putting it on my sewing list. Then I needed to make a few work-appropriate clothes (more to come soon), but I finally got around to starting it last weekend. 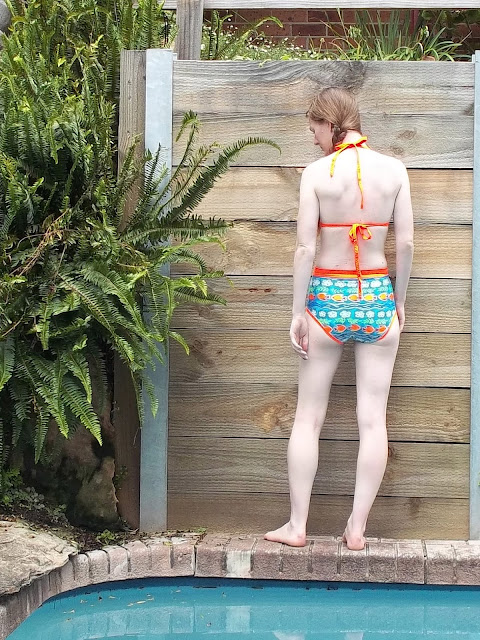 I bought these fabrics at My Hung in Hurstville which has a huge range of lycras. When I went looking for fabric, this wasn't really what I had in mind. The pattern has the option to do the straps and waist and side bands in a contrast fabric which I'd decided to do, but I'd been thinking of using a fabric that was, well, at least a bit more restrained than this one. I was thinking block colour contrasts and colourful but muted main fabric, but once I saw this fish+flowers+waves+seaweed+gold foil nothing else looked interesting. And with the contrast accent again I did try and look for something that would tone it down, but nothing looked like a good match. So instead I went the whole hog and got some fluoro orange to match the fluoro orange fish. Very grown up. 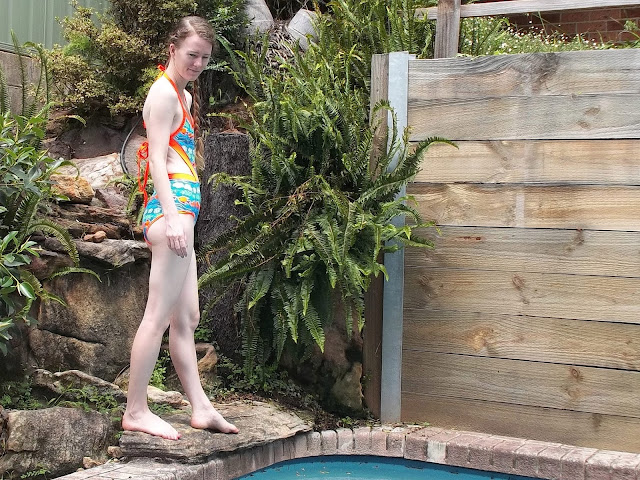 Making the suit itself was pretty good. The instructions are well written, although I did need to reread how to do the straps a few times just to reassure myself that I was doing the right thing. But it was easy to follow. Sewing lycra, swimsuit lining, and swimwear elastic isn't easy - they do all have stretch, but different amounts which can make it awkward to keep things in place. There's a fair amount of basting in this pattern, which is helpful in address those issues, though. 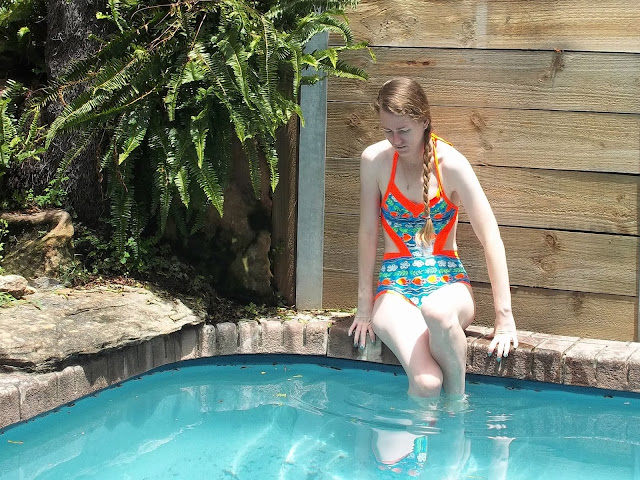 I made a straight size 6, the smallest size. I'm long waisted, and so one piece swimsuits are often a problem for me as if they're long enough they're far too wide, but if they're fitted enough they're often too short. I'd seen a few others made up and lots of comments that the bottoms are quite high waisted. Because the pattern sat high I decided to not make any adjustments, but if I make the one piece again I will lengthen the bodice a little, maybe half an inch. As it is at the moment, the bodice pulls the bottoms up just a little bit over the waistline. It's not something that's a problem, but it is something that I'd fix in a future version. 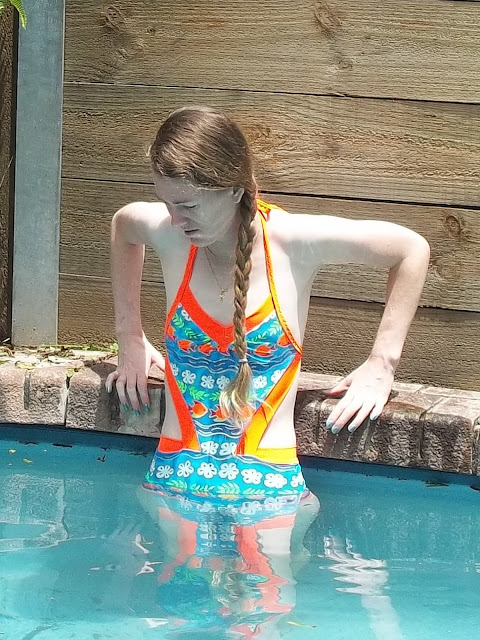 I finished it off this past Saturday, finally getting the straps sewn. I won't post any pictures that give you a close view of them because, well my stitching is pretty woeful. I used a three point zigzag like the instructions say, and the stitching is fine. The straps themselves, however, are not so good. Trying to fold the lycra over the swimwear elastic, keep it even, keep it straight, and feed it through the machine takes either a lot more practice, or an extra five hands, or probably both. Either way, mine certainly don't look anywhere near professional. But they are functional, and they're tied up behind my back where I can't see them, so I think I can put up with them. 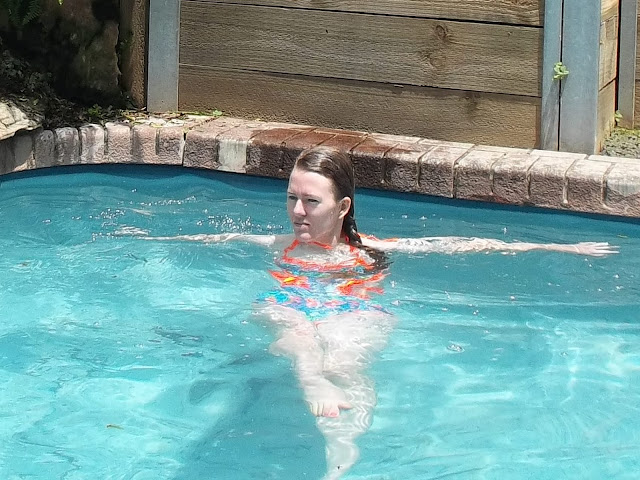 I made one change to the pattern, adding contrast bands on the legs. The pattern says to put in swimwear elastic and fold over the main fabric of the bottoms and stitch it in. But I tried the suit on and it was definitely already fitted enough and didn't need any elastic to keep it snugly in place. Also I was still a bit frustrated from sewing the straps and didn't want to use any more elastic unless it was necessary. Instead, I decided to cut a couple of extra pieces of fluoro orange lycra to act as contrast bands. Given every other edge has the contrast orange, I thought the legs needed the same. So I cut out the extra pieces, stitched the ends together to make one piece, stitched them right sides facing to the bottoms, then folded them over to the inside and finished off with a three point zigzag. 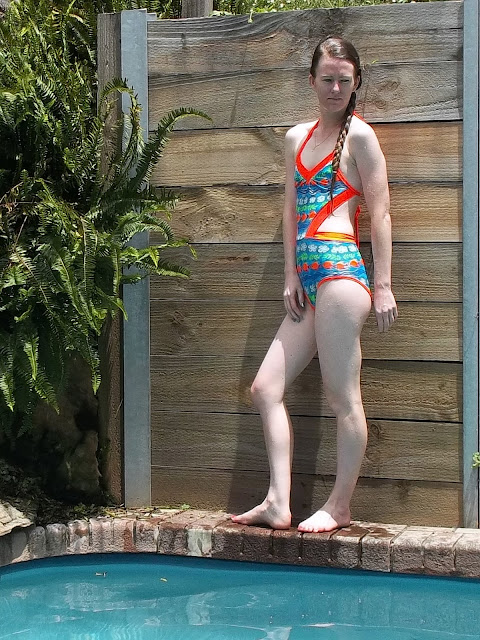 Although I finished the suit on Saturday I wasn't sure when I'd get to photograph it. Although Sydney's had a very tropical summer this year - constant temperatures up in the mid-high 30s followed by big thunderstorms - by the time I get home the storms are in full blast. And then this weekend was a bit grey and not really the right weather. Luckily not only is today a public holiday but it's also been fairly warm and sunny, so I took the opportunity to get the photos done. 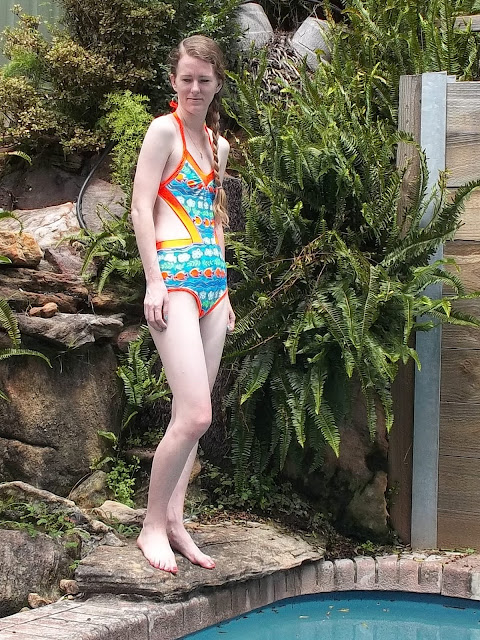 I'm also very lucky that we have a pool so I can get the pictures in the suit's natural environment. With bonus fake rock waterfall and ferns for a 'tropical' feel. I even gave it a quick test swim (our pool's looking a bit dirty because of all the storms) and it did fantastically, no loosening or slipping out of place. 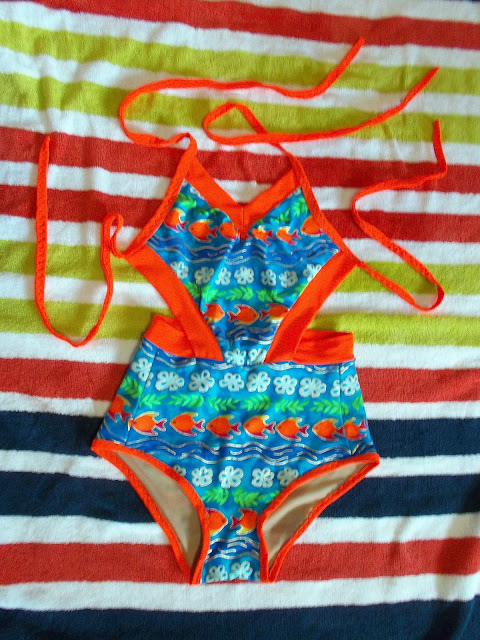 Overall, I am very happy with this suit, even if the straps are badly done. They're on, and they work, which is the important thing. And I love the slightly garish tropical fabric! I have a fair bit of it left - who knows, I might even make the bikini version and give myself a matching set. 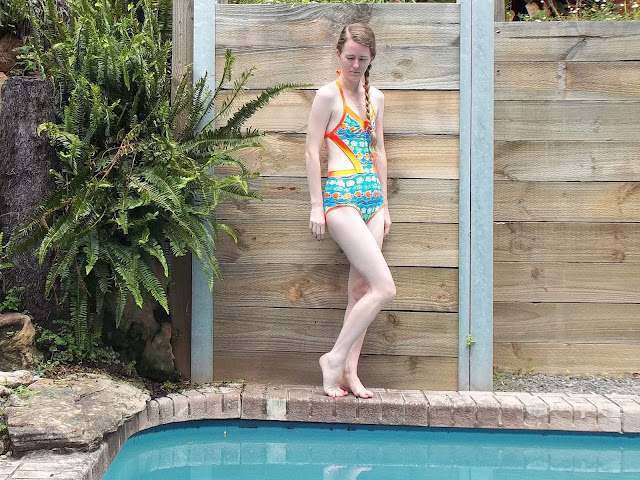 Posted by Antipodean Stitcher at 21:10