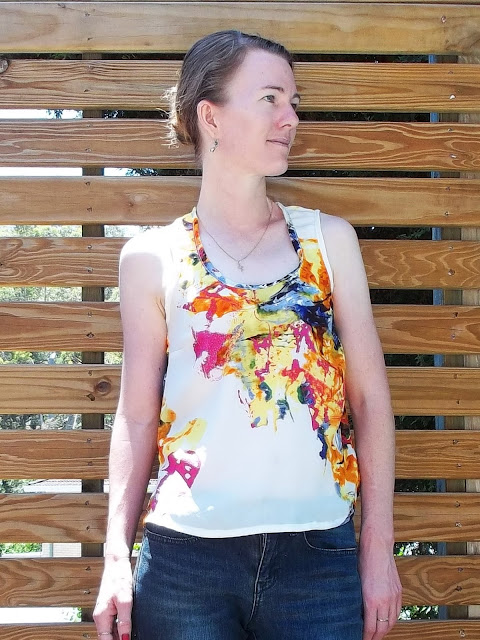 So I got offered a new job a couple of weeks back! I'd been looking for work for a while, in the meantime doing short-term projects, but nothing with any permanence or certainty. But I had an interview in mid-November and managed to be successful, so yay me! Anyway, all this has to do with sewing because this is a job in an office, where I'd previously been at a university/working from home. Although it's not a corporate or particularly formal office, I do still need to dress a bit differently to how I have been. 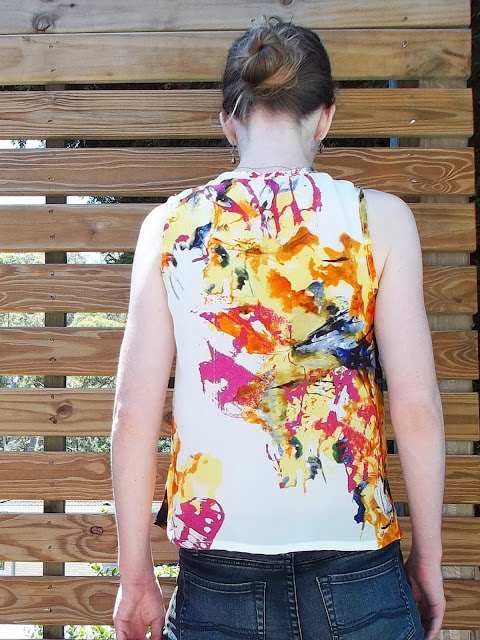 Tessuti released their Kate Top pattern in early November, at the same time as I made it through to the first round of the recruitment process for the job. It was a beautiful pattern, plus they had an Instagram competition for making it, so I was already tempted. When I got offered an interview I started really seriously thinking about buying the pattern. If I was successful, I'd need some more grown-up clothes, and a classic shell top is very versatile and grown-up. 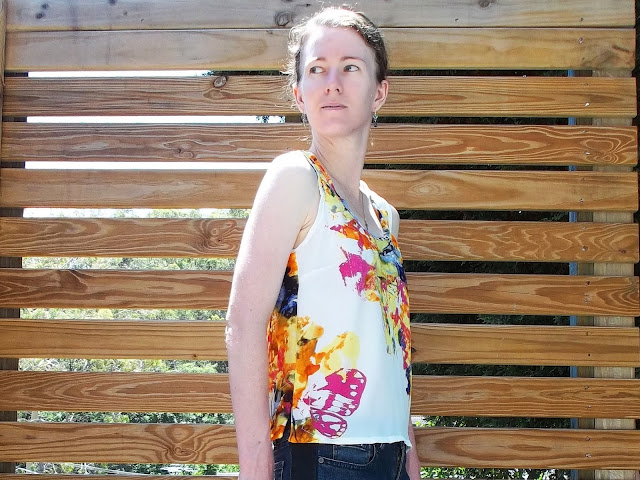 The interview went well, and the offices are about a five minute walk from Tessuti's Surry Hills store, so I rewarded myself with a trip over there. Looking around for something that would be good for this pattern I spied this gorgeous silk. It's called Beautiful Spill and is wonderfully soft and vibrant and I just couldn't pass it up. I knew I had to get it and make the Kate Top with it. 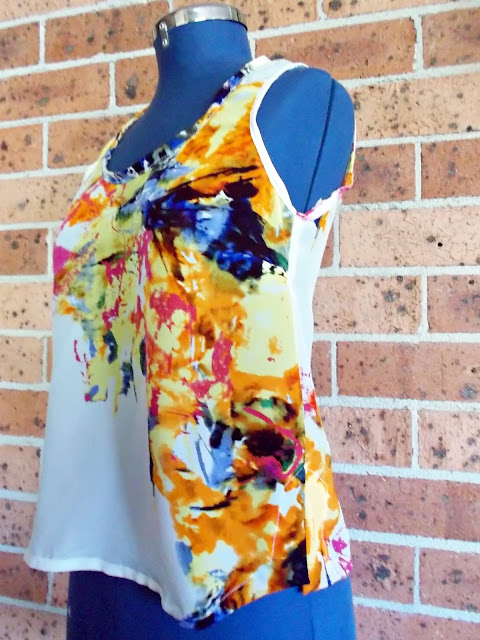 Because the print is very bright I decided to make view A, with the lower neckline so that the colour wouldn't be completely overwhelming. I made size XXS, which fits very well. The top is designed to be a bit loose, and the drapey silk works really well with that bit of extra room from the bust to the waist. Being a slight build I probably could have left the bust darts off because they don't add any shaping for me, so in the future I might not include them. 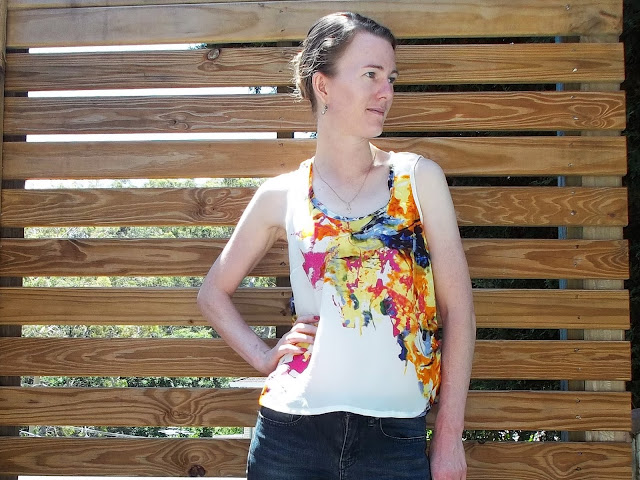 I was a little daunted about sewing with the silk. I have sewn with silk before, but only a few times, and with taffeta and dupion, not with something delicate and light like this. However it wasn't that bad in the end. I used a new size 8 machine needle, a lot more pins than normal, and went slowly, and I didn't have any issues. I also did French seams as the safest way to treat a delicate fabric, so that the raw edges would be hidden away. The only real problem I had with construction was sewing the bust darts on the wrong side of the fabric and having to redo them. There is a front and back to the fabric, but the colours are still very bright and you have to pay attention to notice the difference, which I obviously didn't do at first when doing the darts! 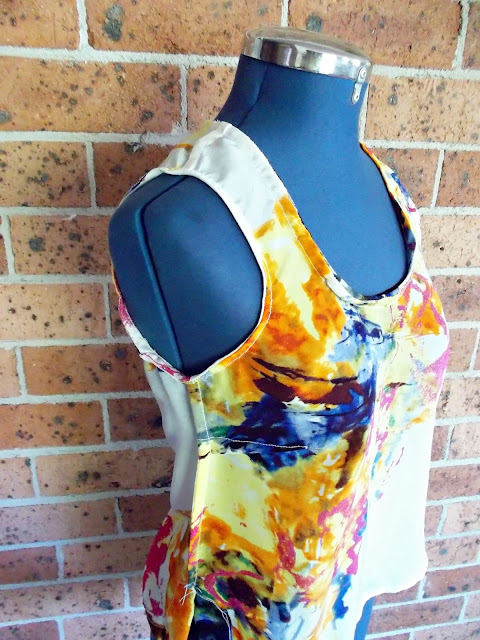 There were a few new techniques in making this. The side splits were something I'd never done before, and looking at the pattern pieces I had no idea how they can together. But the instructions given were really clear and easy to follow. I did stitch them down slightly differently to the instructions, doing each of the four side split sections individually, rather than doing them all in one with the hem. Although the silk did turn out to be easy to sew with, I thought it would be best to concentrate and get each edge done properly by themselves rather than run the risk of the whole thing going wrong. It might have been fine without my precautions, but better to be safe than sorry. 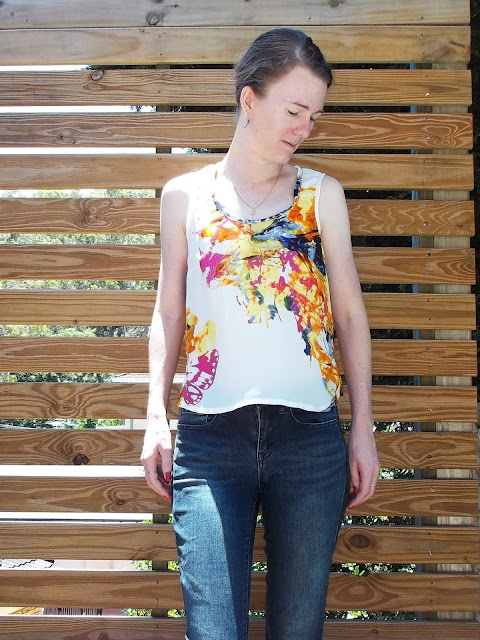 The other new-to-me techniques were using tearaway vilene and making self bias binding. The vilene on the neckline and armholes works to stabilise it, which is especially helpful on a light fabric like this silk. With it, I was able to hang the top as I went along, making it easier to pin things together and see if it was all coming together right. The bias binding was trickier. This silk doesn't really seem to crease - great for wearing the top, but not so good when trying to press a fold on the self bias. In the end I had to accept I wasn't going to get it pressed much at all, and just had to use a lot of pins and pay extra attention to make sure it was attached correctly. It isn't perfect, but for a first attempt and with a fabric that isn't really designed to be used as bias, I think it turned out pretty well. 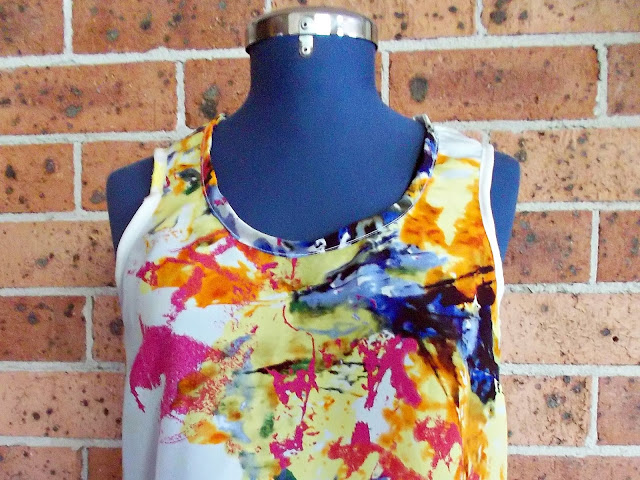 So this is the first item for my (slightly) more grown-up work appropriate wardrobe. And I love it. I'm really happy I decided to use the silk and didn't avoid it because it's a scary fabric. The colours and the drape are both perfect for the pattern. And I think wearing this to an office I can pass as a real and responsible adult! 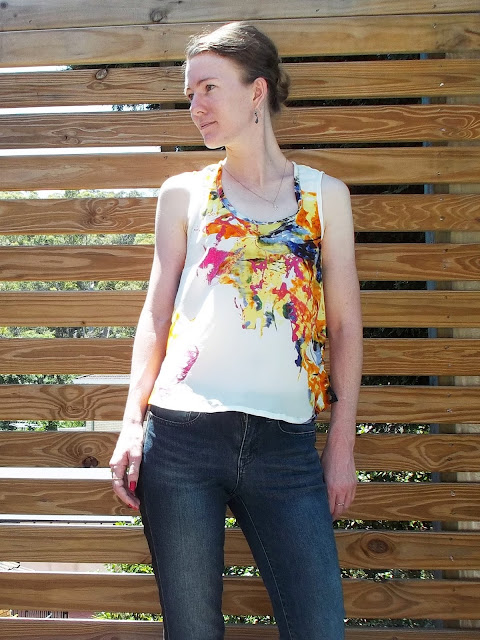 Posted by Antipodean Stitcher at 15:16