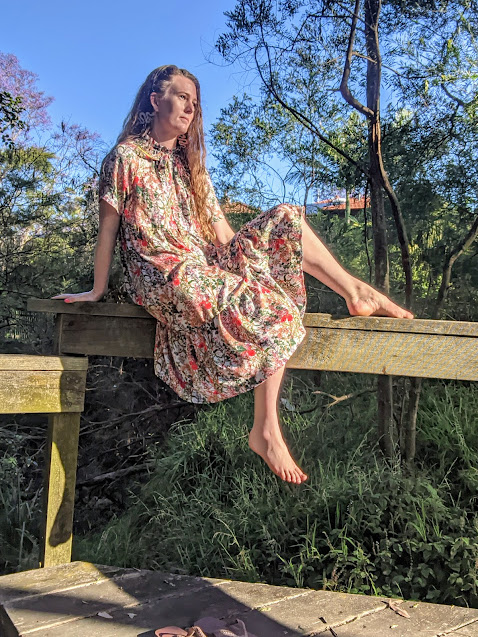 This dress is the Friday Pattern Company's Wilder Gown, which seems to be the current most popular pattern. I can see why it's so popular - it's fairly easy to make and easily adjustable and adaptable. It's loose fitting, but doesn't feel oversized, has a 70s influence but doesn't feel costumey. It has a bit of a secret pyjamas feel but is still very much wearable in public. 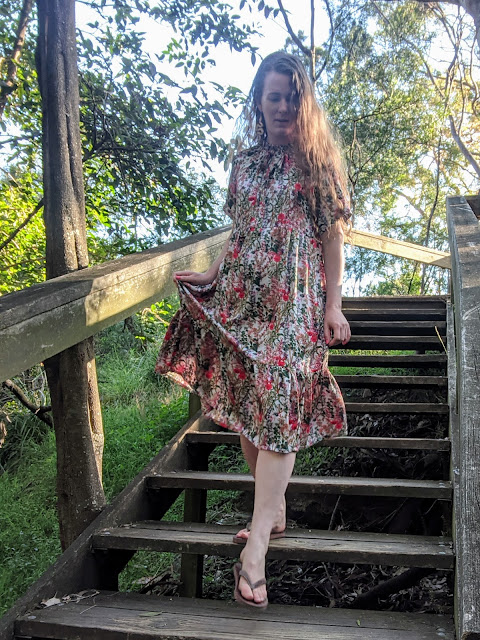 The fabric is a viscose rayon satin from My Hung Fabrics in Hurstville. I bought the fabric specifically for the pattern. I really liked the all over floral print, particularly the fact it has the feel of an overgrown meadow. The print is directional with the flowers all growing along the grainline, but because of the overgrown feel it isn't overly noticeable, which was lucky given I accidentally cut the bodice front pieces out upside down. The fabric is wonderfully soft with a subtle shine and an excellent drape, but it does fray a lot. Each seam is overlocked to protect the fabric from falling apart. 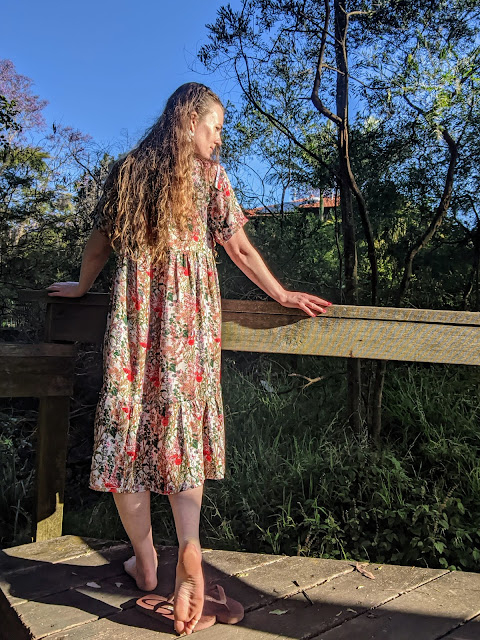 The pattern is easy to follow, with only a small number of pieces. The skirt is two tiers of gathered rectangles, two for the first tier and three for the second. Folded in half, my fabric was slightly narrower than the pattern piece, so for the first tier I just used the width of the fabric. The second tier is three pieces, two slightly narrower and one the correct width. 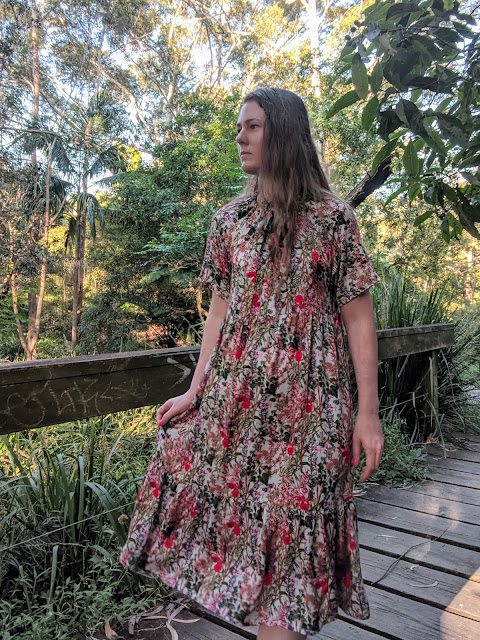 I chose to make the gown with short sleeves and also shorten the length slightly so it wouldn't look quite so much like a nightie. The length of the full dress would have sat at a slightly awkward length, almost a maxi dress but not quite, so I made the second tier shorter by cutting it off at the lengthen/shorten line. 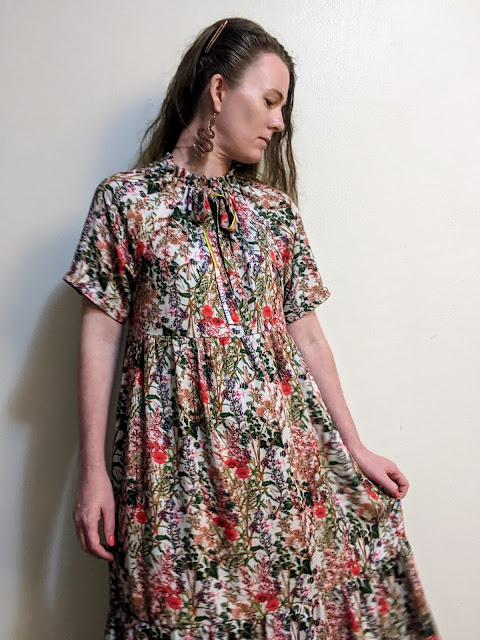 Construction is generally very straightforward but I did have some issues with gathering the skirt tiers. The first line of gathering stitches I put in were too close to the edge of the fabric, which given the fabric's habit for fraying meant I wasn't able to gather the whole way along. I removed those stitches and did new gathering lower than the seam line which gathered in quite well. It did mean I had to remove that line of stitching from the finished garment, but it also avoided any more frustrations. 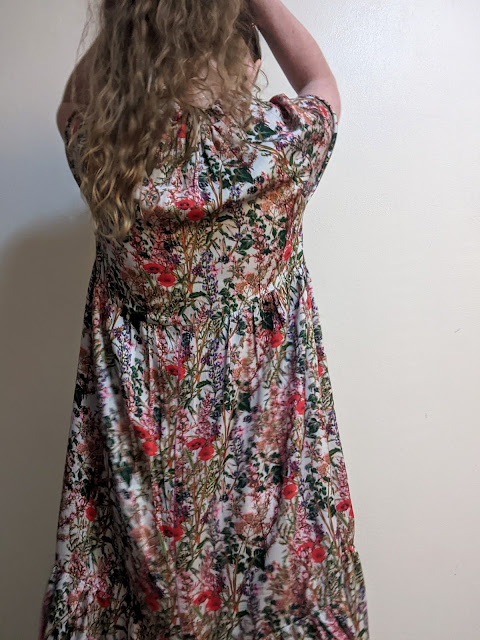 The one new element to me was the gathered neckline. The pattern pieces have an extended neck almost like a turtleneck which is folded over and stitched with two lines of stitching about an inch apart, with the neck tie piece threaded through the channel between the stitching lines. This then gathers the dress when worn, pulled as loosely or tightly as desired. 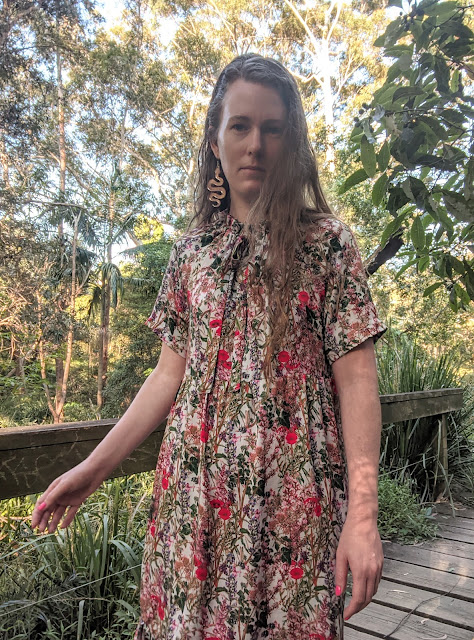 I think this dress will get a lot of wear in these warmer months. Because of the print and the length I was slightly worried the dress might be a bit overwhelming, but I'm really happy with how it turned out. The only negative is that the fabric is slightly warmer than I expected it to be. The large amount of fabric gathered at the high neckline definitely contributes to that, so tying it more loosely might be one option. Overall, though, it's a lovely, dreamy, floaty dress that's both an enjoyable make and an enjoyable wear. 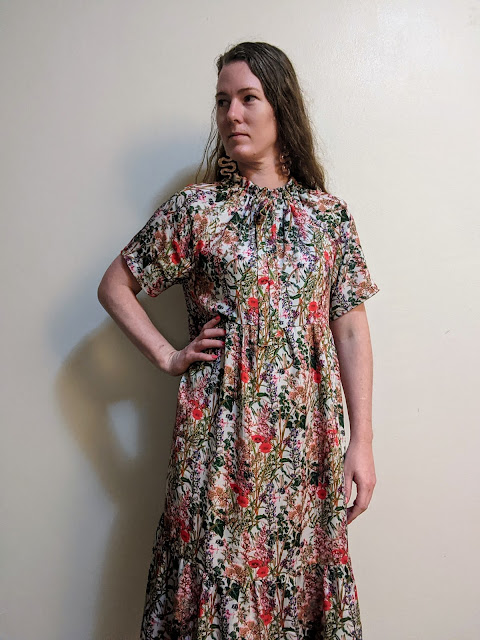 Posted by Antipodean Stitcher at 23:29