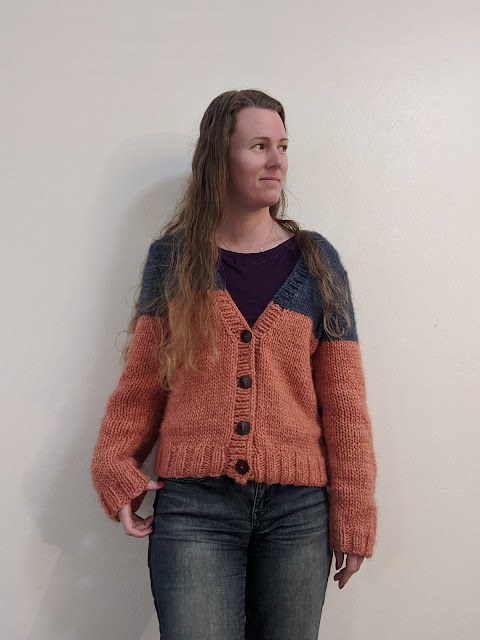 This is my first proper piece of knitting!
Late in June, after over three months of working from home and with my flat feeling very cold, I decided to try and learn to knit. As a leftie I'd tried to learn to knit a few times before but had only been taught by right handers which just didn't work very well. So I looked on YouTube for a tutorial and found this one from Noble Knits. It's very clear and easy to follow, and I found surprisingly that knitting wasn't too hard once I watched a left hander do it! 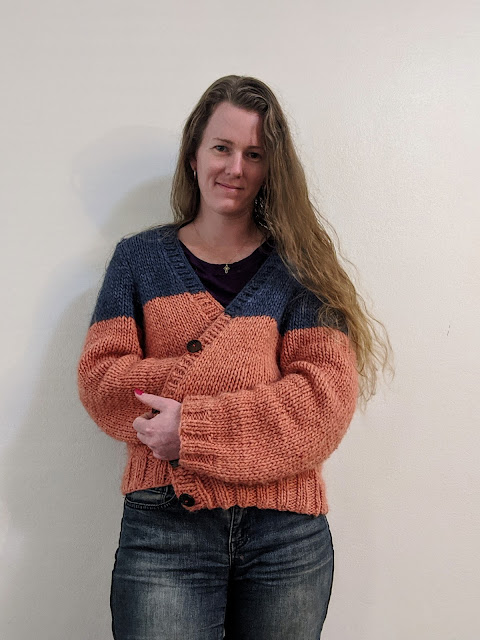 First I knitted some simple squares, then a scarf and beanie just to get the hang of it. But part of why I'd wanted to knit is my flat is extremely cold, so I wanted to make myself some warm woollens. So I started looking for some free patterns with chunkier wool, so it wouldn't be too hard or take too long to make. I also didn't want to spend a lot, so went to Spotlight to see what I could find. The yarn is Moda Vera Mawson, a 50% acrylic, 25% alpaca, 25% wool blend. It's soft and warm and very slightly fuzzy. The colours are denim and peach, although the peach is closer to a washed-out burnt orange. 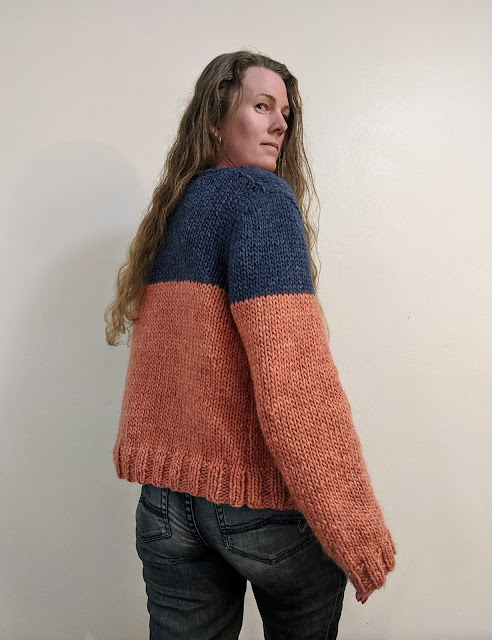 I was originally planning to make a jumper and had downloaded some patterns that were right for the yarn I bought, but then I decided I don't have enough warm cardigans, so I searched for a cardigan pattern. I'd already bought two colours, so was looking for a two tone pattern. Unfortunately I couldn't find one for the right needle size, so instead I did the very sensible thing when completely new to knitting and combined two patterns: the Berroco Estuary and Berroco Clem, using the Estuary for the pattern and the Clem for how many stitches to cast on. 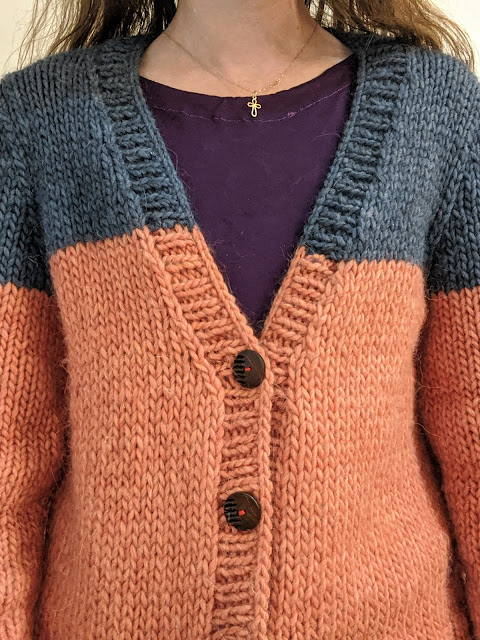 Knitting the cardigan itself was pretty basic as it's just basic ribbing and stocking stitch, with simple decreasing and increasing for the different pieces. It took me a few weeks to knit, but was mostly straightforward. I did make a few errors and have to redo some sections, one side I accidentally made too long before changing colour and had to undo several rows. Then on the right sleeve I ran just short of orange and had to start blue a row early. Fortunately because it is a slouchy cardigan it doesn't matter too much and isn't too noticeable. 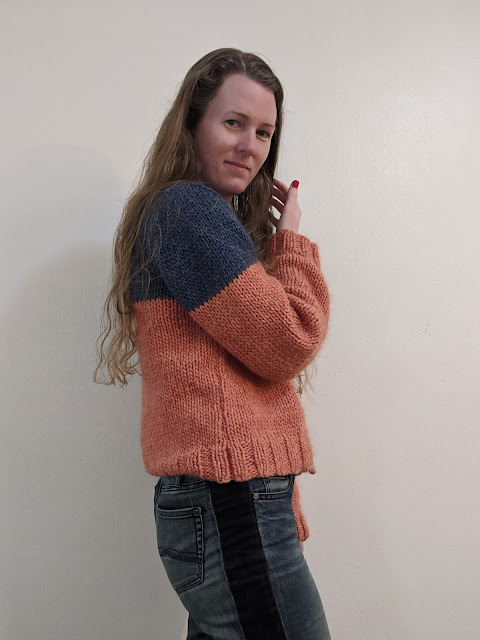 Making buttonholes was a little more daunting and the instructions in the pattern didn't really explain it at all. So I looked at a few more YouTube videos of different ways to knit buttonholes. I did eyelet buttonholes which the pattern asked for. Because my buttons are large I was initially unsure they would be large enough, but surprisingly they do stretch wide enough for the buttons to fit through. The buttons are dark wood, and stitched on with topstitching thread. 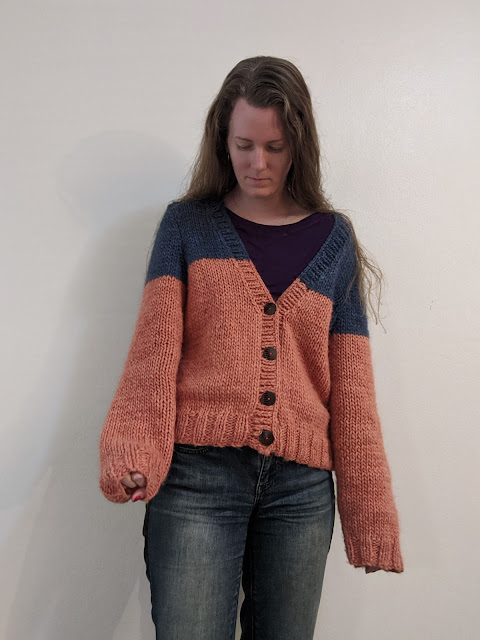 I blocked each pattern piece to set the size. The sleeves ended up longer than expected after blocking, even thought I'd measured the length while making them. At first I was slightly annoyed by that but once I stitched it together I liked the extra length. I feel that it adds to the slouchy cozy warmth of the cardigan. I often like to pull the sleeves of my jumpers and cardigans down over my hands, so this cardigan just already has the sleeves pre-stretched. 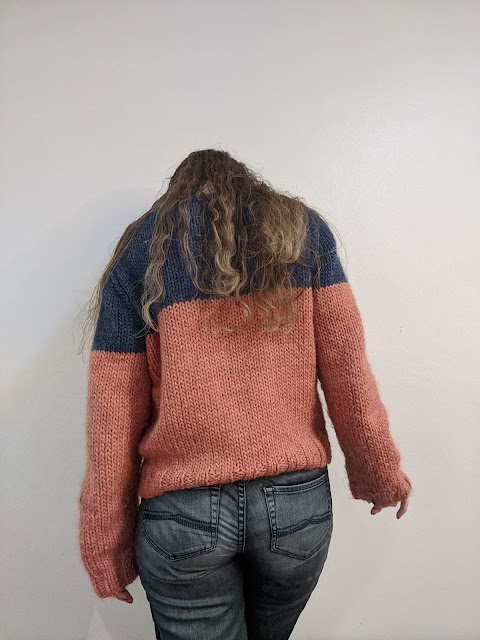 I'm incredibly happy with how well this cardigan turned out. When I'd previously tried to learn to knit it didn't work well at all - my stitches were uneven, twisted and tension far too tight. But this is even and neat and has a great slouchy fit. I've been wearing it regularly for most of the last month. 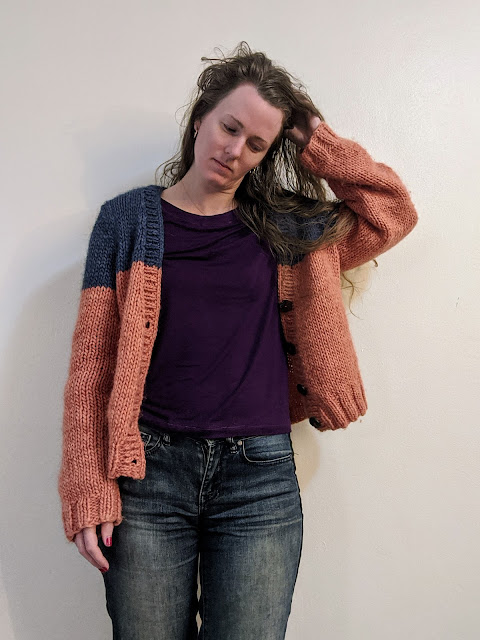 Posted by Antipodean Stitcher at 04:59