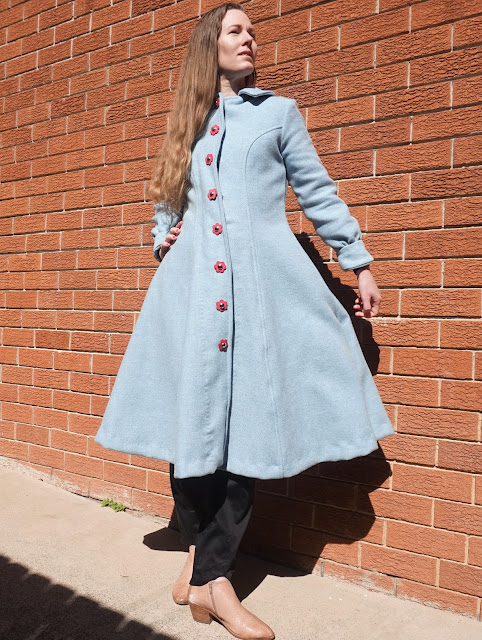 This coat has been a long time coming. I made my first winter coat back in 2006, when I had minimal experience and had never attempted anything at all comparable in terms of difficulty. It turned out pretty well and I have worn it ever since, but there were errors that I noticed more and more as I got better at sewing - the sleeve is caught slightly, the hem is not very neat, the thread I chose doesn't quite match the fabric, it's not quite warm enough. But making a coat was such a big task and battle with my machine that I put off making another one for a long time. 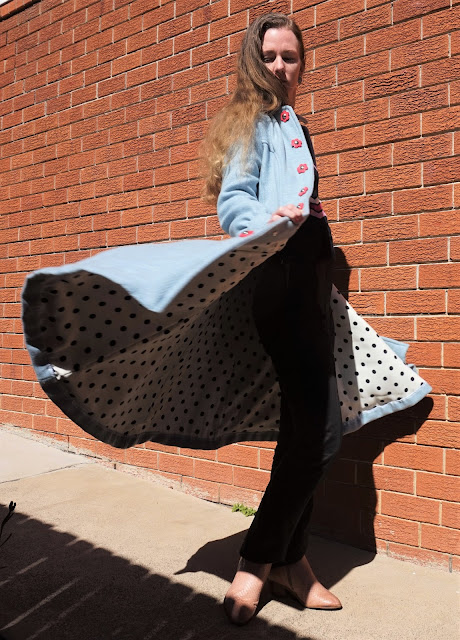 This coat is made with an Australiam Home Journal pattern that looks to be from the mid-to-late 1950s. Unfortunately Home Journal patterns aren't dated so I can know for sure. The coat has princess seams, a round collar and full-ish skirt. The sleeveheads are fitted, but the sleeves are slightly gathered at the cuffs. I've had the pattern for a few years, but had been daunted about making a new coat. I also wanted to make sure I found the right fabric to use. It needed to be thicker than my older coat, but also in a nice colour - just because it's winter doesn't mean coats have to be muted and dark colours. Wool is normally pretty expensive, too, so I wanted to be very sure and ready before I bought (and potentially ruined) pricey fabric. 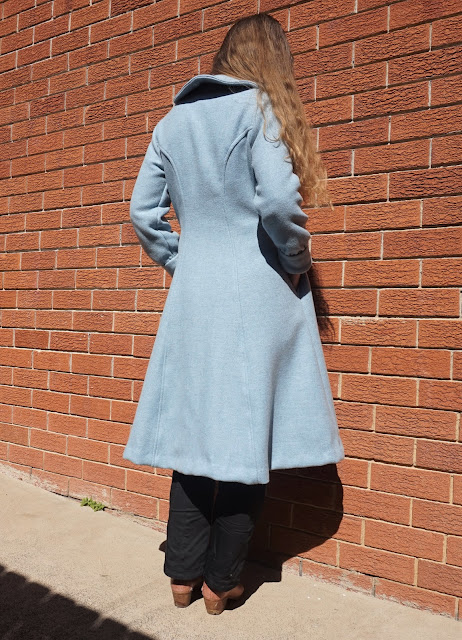 I found this wool at The Fabric Store in June. It's thick and warm, and at $42 was surprisingly cheap for wool coating. I loved the crisp winter sky colour, and the fact that it isn't a flat blue. If you look closely, you can see that it's a yarn dyed fabric with some variation from a light blue through to a grey. There's also a bit of pinky grey in the fabric according to all the fluff I cleaned out of my machines. The differences aren't large, but enough to give it some more depth. 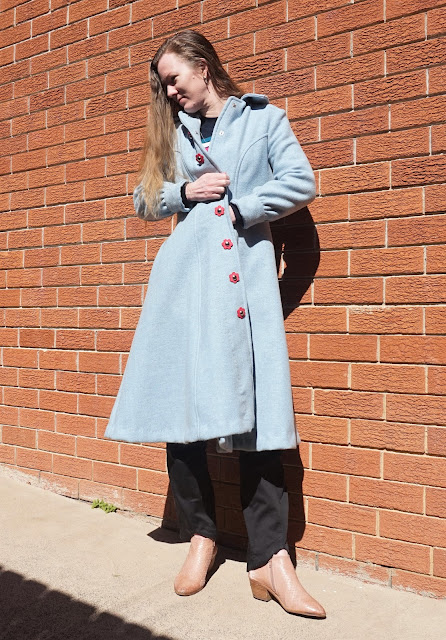 Being a vintage pattern, it came in only the one size and did not include seam allowance. Markings on the pattern pieces are almost non-existent, so I had to make sure I paid close attention. I kept the fabric pinned to the pattern pieces until I needed to sew them to make sure I didn't get mixed up. I made only one change to the pattern, lengthening the sleeves as the original is bracelet length. I added about 3 centimetres, so they are long enough to keep my wrists warm but not too long to bunch up on my hands. 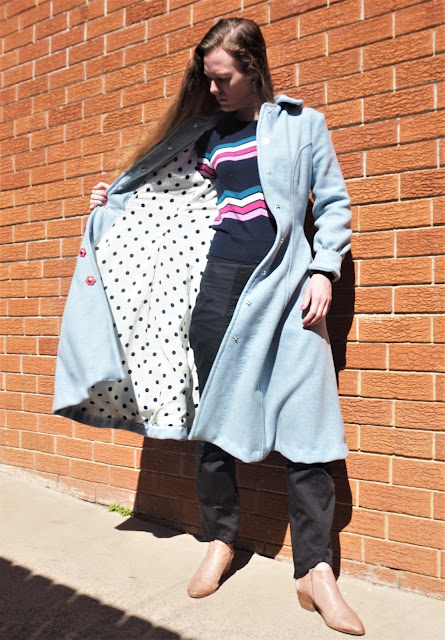 It took a long time to get this coat finished, partly because I took a three week break in the middle of making it. I'd been following the instructions closely, but vintage patterns don't give much detail, and no illustrations of the steps. When I got to the cuffs, the instructions just made no sense at all. The weather wasn't cold despite it being winter, so there wasn't a need to get a warm coat finished quickly, so I put it to the side. I reread the instructions every few days but it never made any more sense, so I didn't do any more work on it until the weather was predicted to turn cold again. 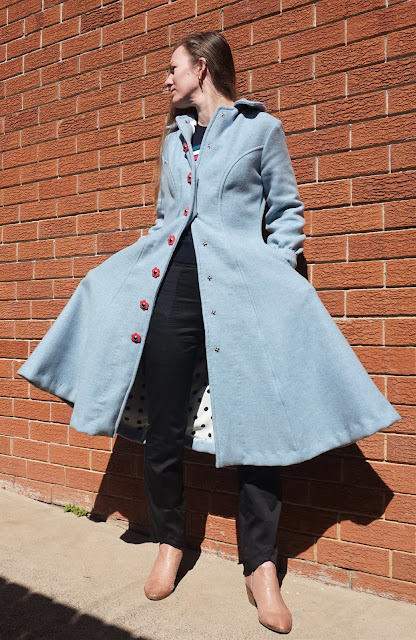 In the end I ignored the instructions for the cuffs and just worked it out for myself. They're probably the least neat part of the coat and might have been better if I'd followed the instructions, but I didn't want to run the risk of making a mistake. They still look fine, and I think anything I did to try and 'fix' them would probably end up looking more uneven, so I will just leave them be. And apart from the cuffs it was a smooth - if slow - sew. 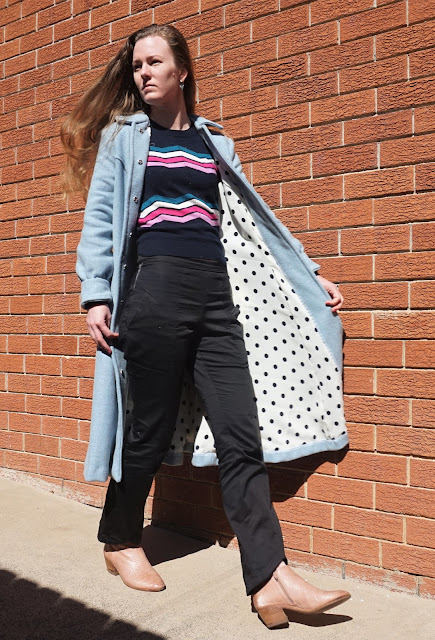 Originally I was planning to use a different lining for this coat. I have some vintage 1950s lining with orange and blue roses that perfectly match the wool. Unfortunately, the piece was too small. I tried any and all pattern placements but simply couldn't get them to fit. Luckily I also had this cream and black polkadot lining in my stash, and the piece was big enough for the coat. The polkadots also match the buttons better than the floral lining would have, so I got over my disappointment of not being able to use it this time. 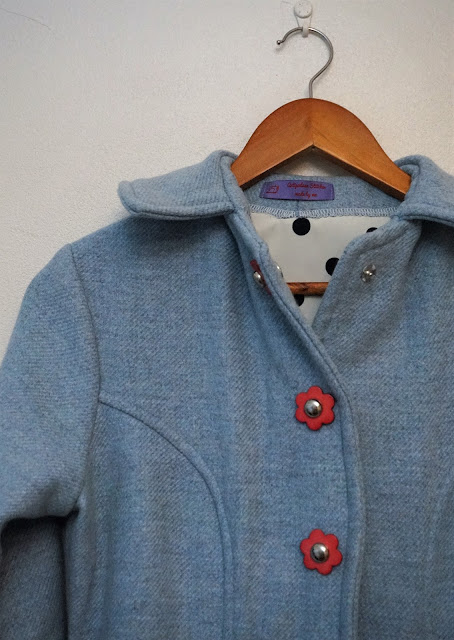 The buttons are also vintage, although I'm not certain when they're from. I found them at Rozelle markets about five years ago. I decided to do snaps rather than buttonholes because the thick wool was hard enough to sew seams, let alone doing buttonholes. I didn't want to run the risk of ruining expensive wool when I could just as easily have decorative buttons and snaps. Hand sewing on eight buttons and snaps did take a lot of time, but I'm happy with the neatness of the end result. 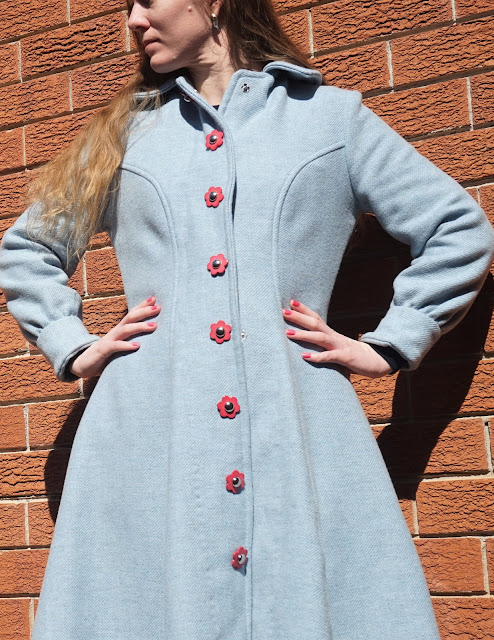 All seams and facings are overlocked to stop fraying. I stitched the princess seams down flat to keep them neat and reduce bulk. Stitching the seams down also accentuates the shape of the seam lines. The side seams aren't stitched down, however, because I added in pockets. In terms of time, there's probably as many hours of work hand sewing as there is machine. The eight buttons and snaps are sewn by hand, as are the facings and cuffs. I considered machine sewing the hem but decided to hand sew that too to keep ot neat. 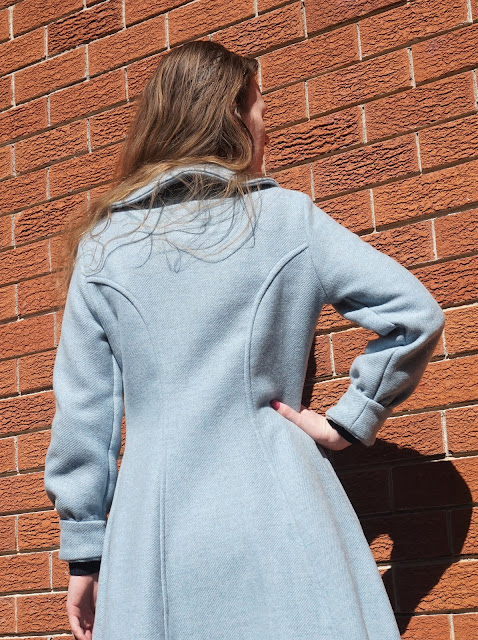 I am extremely happy with how this coat turned out. It definitely shows the benefit of all the experience I have in the last 13 years in the quality of the stitching and attention to detail. But my machine still wasn't very happy with me making this, so I suspect it will be another 13 years before I make a third winter coat. 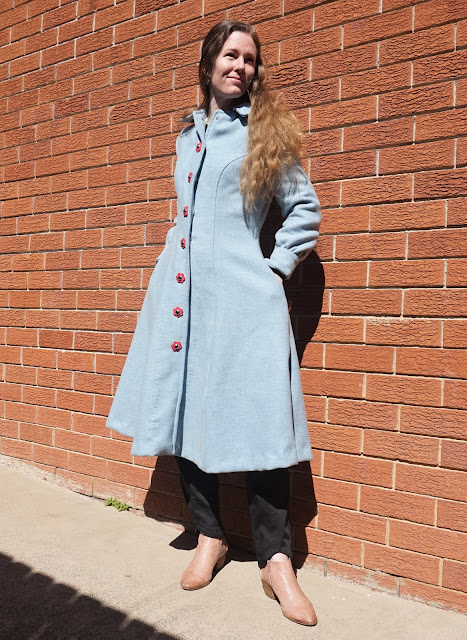 Posted by Antipodean Stitcher at 06:17