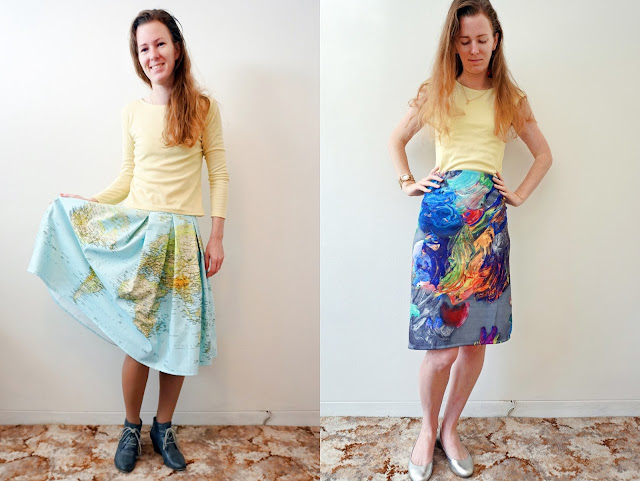 Two new skirts for today's post, one work and one casual, so this post is a bit longer than normal but that makes up for the recent infrequent posting.
Both of these were made without a pattern, and both fabrics are from Spotlight. 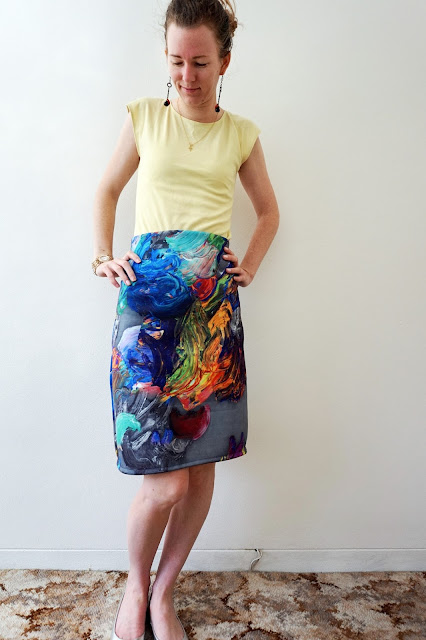 While I didn't use a pattern for the Messy Artist skirt, I did do a quick google about how to draft a knit skirt. I found a useful how-to on Maria Denmark's website with instructions on how to measure. It's quite straightforward: you use your waist and hip measurements minus four centimetres, then divided by four, and the distance between the two. 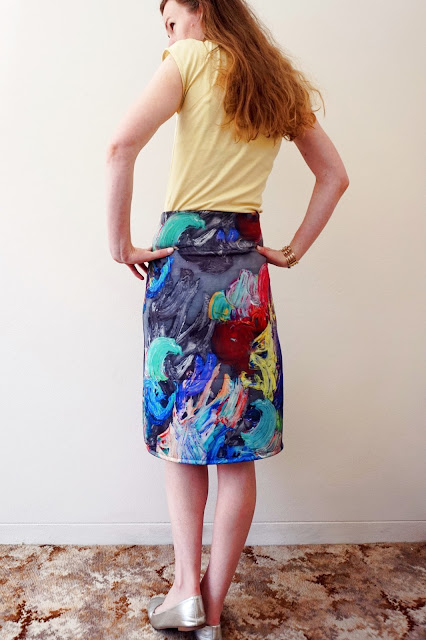 The skirt is just two identical pieces, one front, one back. On the fold, you use the waist minus four then divided by four measurement, then measure down the distance to work out where to widen for the hips. I used my french curve to angle out from the waist to the hip. This is a bit trickier, because the curve of each person's side is different, But with a bit of attention and awareness of your shape it's relatively straightforward to measure. After that it's just measuring the desired length for the skirt. 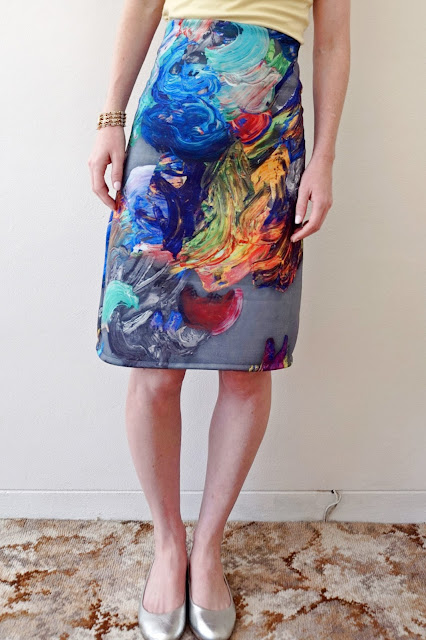 I had been going to put elastic into the waistband, but given the fabric is a scuba knit a separate waistband wasn't necessary. I'd planned to use a wide elastic, so had added 10cm to fit it in. When I'd sewn up the sides I tried the skirt on it fit well enough that I decided not to add elastic. I also liked that the extra fabric allowed me to make the skirt either a normal waisted or high waisted skirt, so decided not to cut it back. 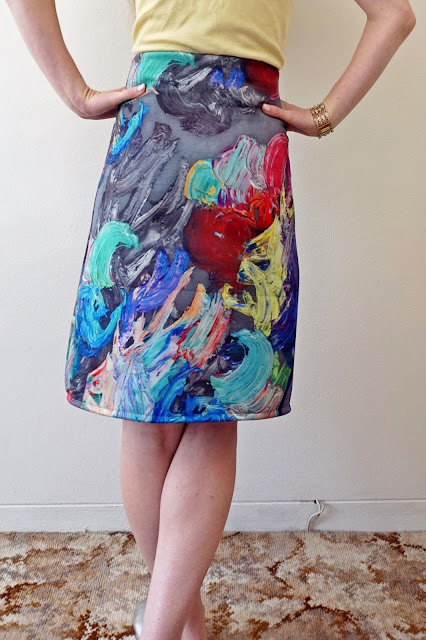 The entire skirt was about 20 minutes of work. It took longer to decide on the right placement of the print for the front and the back, working out which bit of paint and which colour I wanted where. It's all sewn with a zigzag stitch for stretch. I made the skirt slightly A-lined, so it's a snug fit to the hip but then hangs down a bit looser to just above the knee. 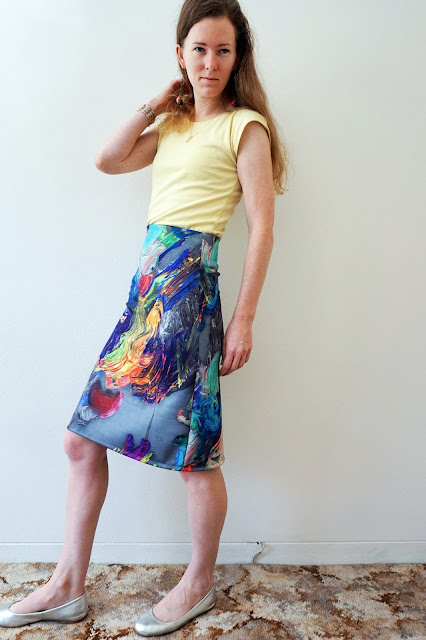 The fabric for the second skirt is one I've had for a couple of years. When I saw this fabric I loved it immediately. I am a geographer, so I felt like I had to buy it. It was always going to be a skirt, but it took a while for me to get around to it. I bought two panels of the fabric because I wasn't sure what would work best. The width of the panel was wide enough to fit around my waist, but adding darts would have meant losing some of the map. With the two panels I could have one front and one back, with the option to gather or pleat the waist. 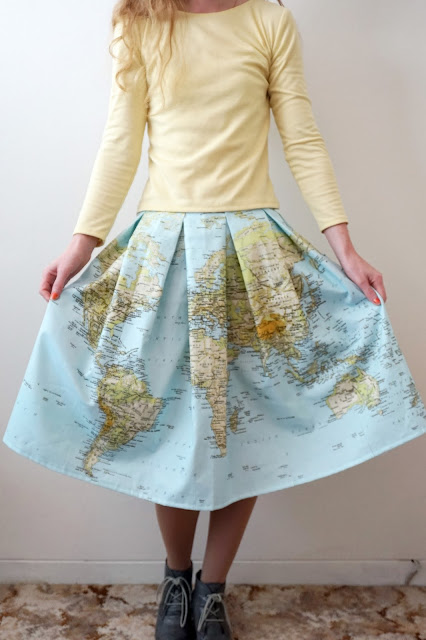 In the end I decided to make the skirt pleated. The fabric is a cotton duck, so it has quite a bit of body and I felt it would be too full if I gathered it, and the waistband would be too bulky. I also put pockets in the side seams, although I initially sewed them inside out. 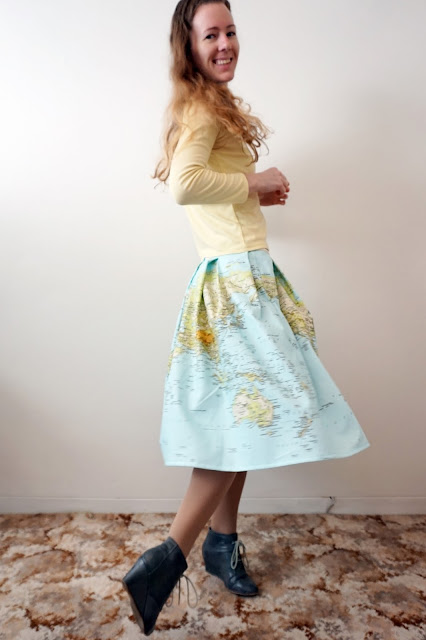 Even though I used two panel pieces for this skirt, for some reason I decided to put the zipper in the centre back instead of the side seam. This meant inserting it into the middle of the back panel, Given cotton duck tends to fray quite a bit this was a daunting - and honestly stupid - challenge. I folded the skirt to find and mark the centre back and used fusible interfacing to try and stabilise the fabric. I then marked the length of the zipper and stitched around the sides and bottom of the line. Next I cut along my marked line, with diagonal cuts at the bottom to the corners of my stitch line, folded the fabric back to the stitching, and pinned my zipper in. 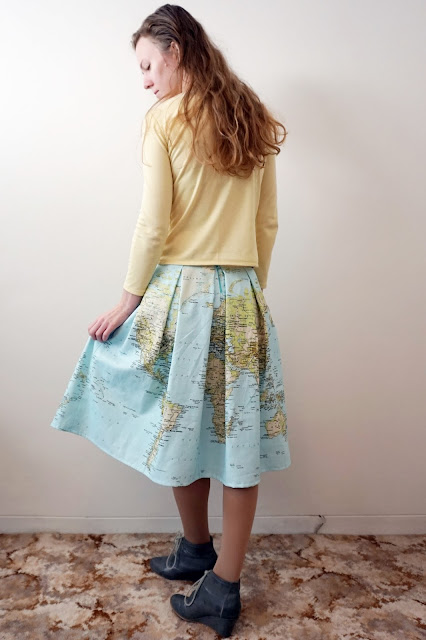 Unfortunately when I stitched it in it didn't quite work. I hadn't folded enough fabric over, so my machine didn't catch it to stitch down properly. And at the bottom it didn't catch the triangular piece of fabric at all. So I pulled the zipout, did a new wider line of stitching, and tried again. Fortunately, this time it was successful. 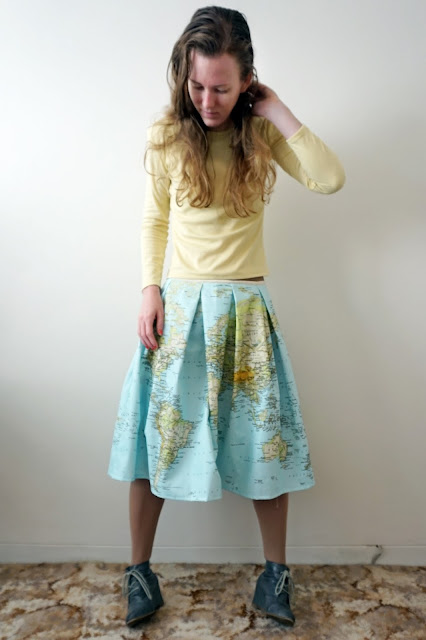 After putting in the zip, I needed to work out the pleats. I pinned the side seams to my mannequin and started arranging the pleats. I didn't do any measuring, I just eyeballed where to fold. I tried to make the folds opposite on the back to the front so that in theory all of the world is visible around the skirt. I pleated and pinned until the skirt fit the dummy, then stitched the pleats down. 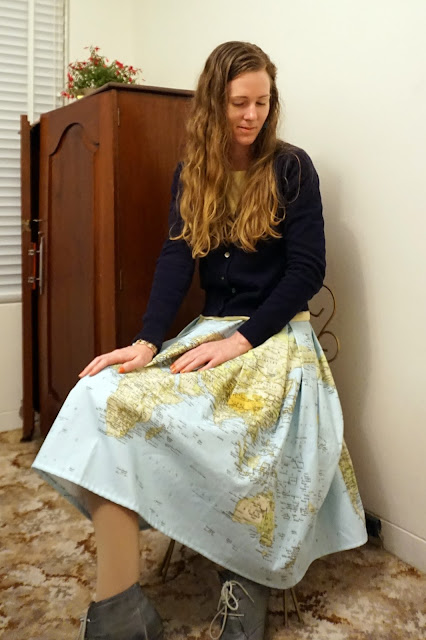 The skirt is finished off with a bias binding waist and a narrow hem. The hem is just double folded narrowly to not lose any of the print. I used 12mm bias binding for the waist. I stitched the binding on the inside of the skirt, folded it over to the front, and stitched it down. 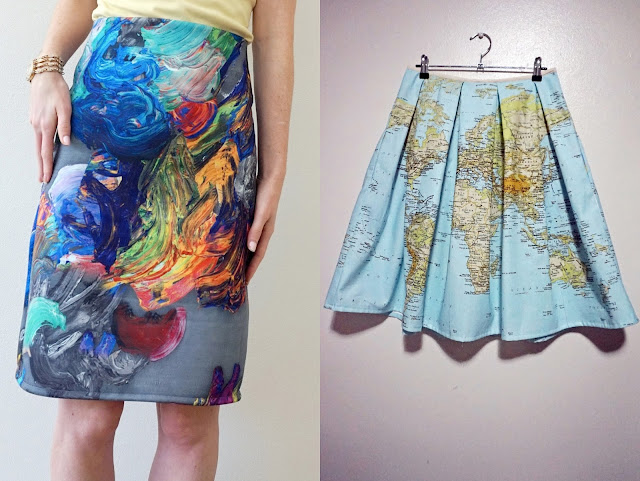 I'm really happy with how both skirts turned out, and have already worn each of them. They also both received a lot of compliments when I wore them, and questions about where I bought them - especially the geographer skirt. It was great to be able to tell people that these are made by me.


Posted by Antipodean Stitcher at 01:48