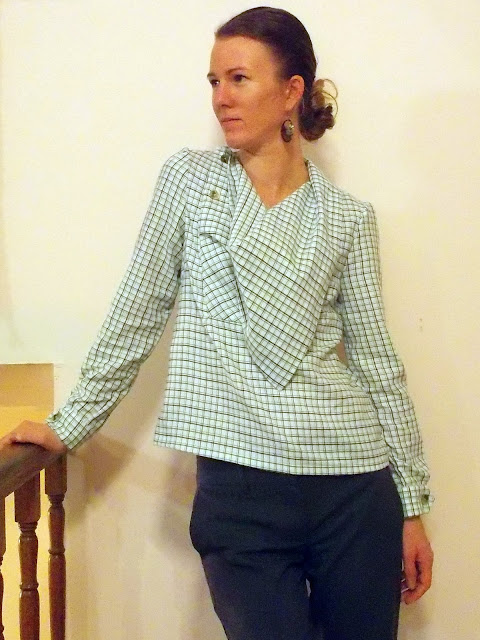 After summer extended well into autumn, winter has decided to make up for it and arrive promptly here in Sydney. Last weekend was torrential rain, storms, and flooding, which stopped me being able to photograph another project I've finished. Instead, I spent the weekend (and the evenings of this week) on a new winter blouse that Phryne Fisher would love to wear. 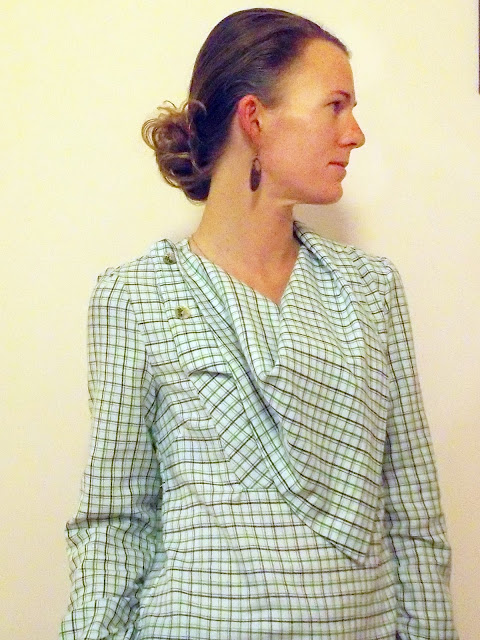 The pattern is McCall's M7053. It's from their Archive Collection, originally printed in 1933. The lines and styling are very much Art Deco, but not overwhelmingly costumey. It means it's noticeably not you're average store-bought blouse, but doesn't slip over into playing dress-ups territory. 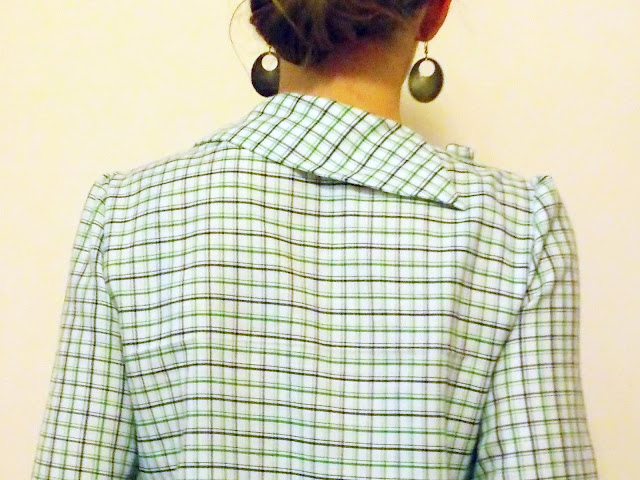 The main shape of the blouse is just a simple loose top with minimal shaping, with all the interest in the asymmetric cowl. It's a very weirdly shaped pattern piece. It curves around the back at the width of a slightly wider than normal collar and then at the front is basically a large distorted trapezium. Because the shape is very strange and it's not immediately obvious how it inserts into the blouse I wouldn't recommend this pattern for a new, inexperienced or unconfident sewist. 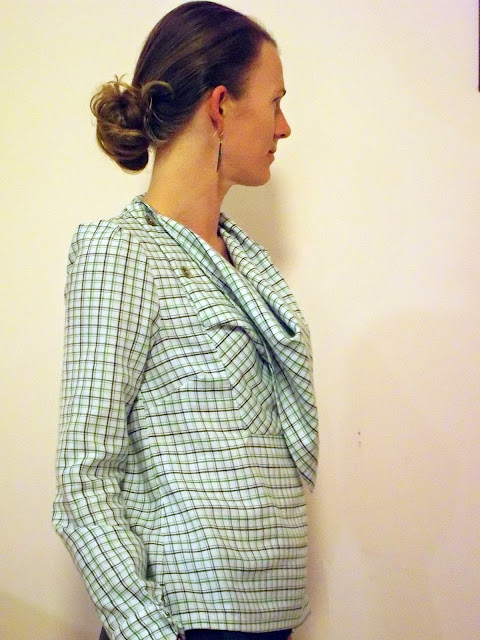 The fabric is a remnant piece of wool I bought at Pitt Trading. It's very soft and lightweight, but also surprisingly warm. I normally feel the cold and the air conditioning system at my work tends to mean I'm always wearing a cardigan or jumper but I didn't need anything over the blouse. It was warm enough by itself. Which is great, because it's such an interesting shape that you really don't want it covered up. 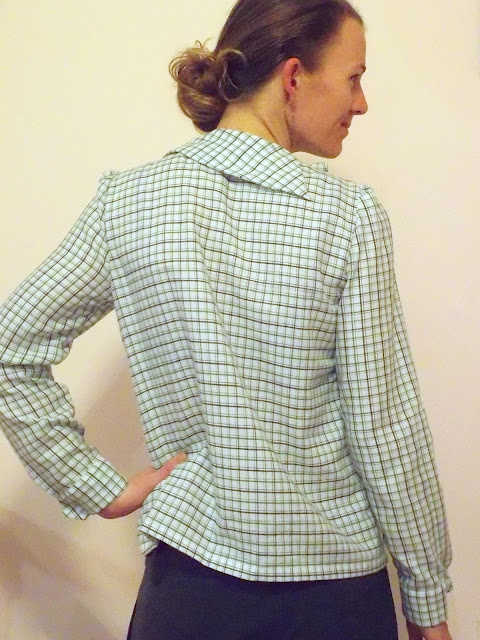 Being wool it was great to work with. It pressed very easily, which was useful for some of the facings and the cowl section. The cowl section is self faced and requires the seam allowance on the facing piece to be pressed down so that it's already folded in when it is attached to the main part of the blouse. First the outer layer of the cowl is stitched to the blouse, and then the facing piece is stitched over, hiding all the seams within. This wool was so good to press that it took all of about 20 seconds to get the seam allowances sharply pressed. The only issue was that, given it's a woven wool, it frayed like crazy. So every seam is bound with bias binding. This did add quite a few hours to the time taken to make the blouse. but it gives the seams necessary security and a neatness of finish. 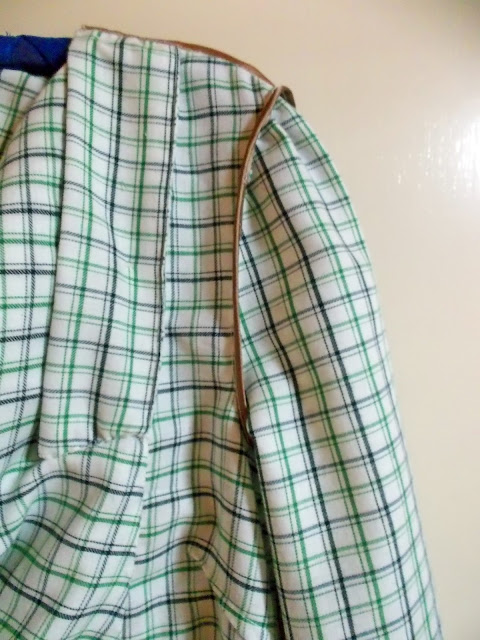 One important thing to note about this pattern though is that the fabric requirement is pretty absolute. I often manage to use quite a bit less fabric than the pattern asks for. In fact, for this pattern the piece of fabric I had really wasn't big enough. In the end I had to shorten the length of the blouse. I like the length it ended up at, but if you do want it to be hip length like it's supposed to be then ou must buy the required yardage. I also used press studs under the buttons rather than buttonholes. That way I get the look that the buttons give it but don't have to worry about the fabric fraying. 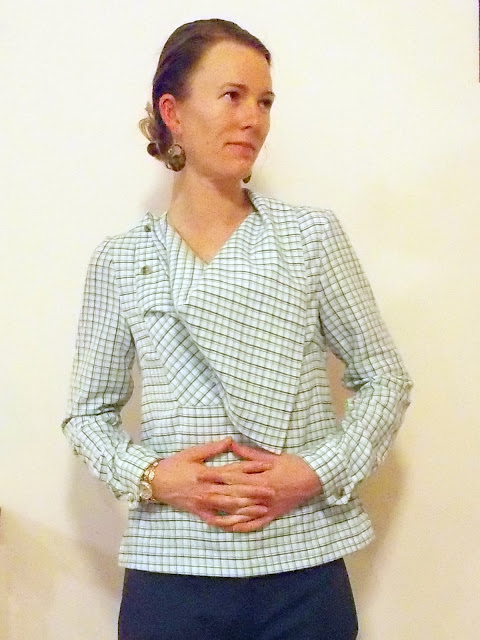 I've named it Phryne's Winter Blouse because it really is something that Phryne Fisher from Miss Fisher's Murder Mysteries (great show, and wonderful late-1920s costumes to look at if you're a fan of vintage fashion) would wear. The buttons on the blouse are in fact from the Miss Fisher Collection, which I picked up when I saw the costume exhibition recently. It's still on in Parramatta for another week or so, so Sydneysiders get down there quickly if you haven't yet. Looking in the gift shop I saw the buttons and thought not only were they beautiful, they'd also match really well with the fabric. This blouse was at the time my next-up make, so was already in my mind. I knew I needed buttons for it, so decided to buy these ones. 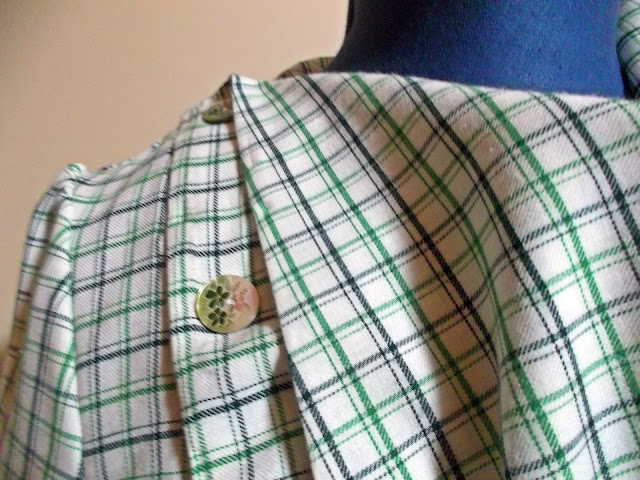 Overall this was a very involved make. The instructions weren't always completely clear, and they actually miss out telling you when to sew up the side seams, something you have to work out based on when the sleeves need to be insterted. But I'm extremely happy with the result. A fabric that suited the blouse so well was a great bonus. 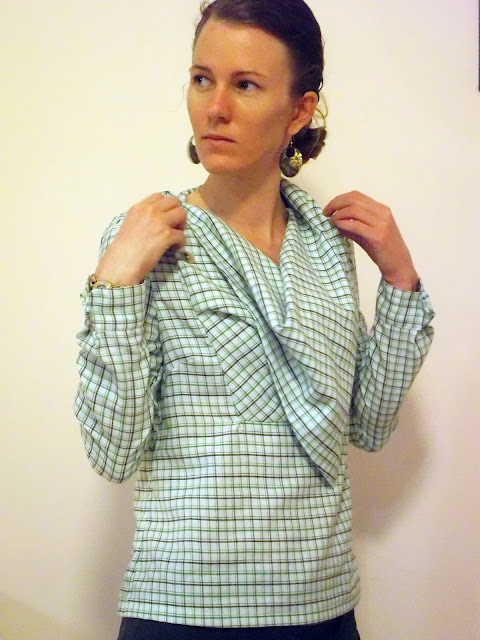 Posted by Antipodean Stitcher at 07:34